Zach Schapiro (right) worked on the app with his mentor Dr. Vince Day, program director for computer science and interactive technologies at SCH Academy, through the school's Venture Incubator … 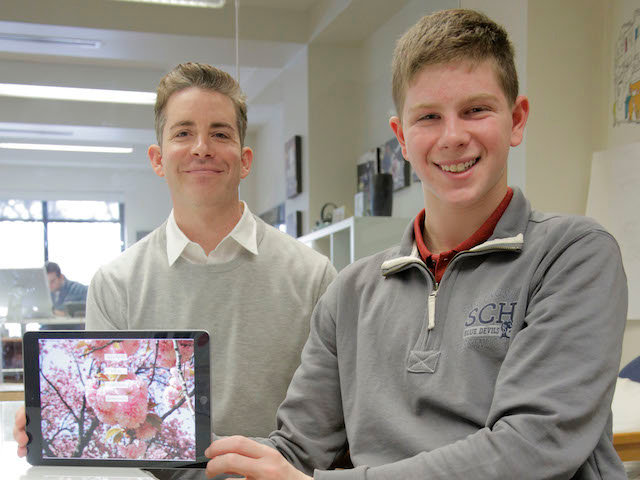 Zach Schapiro (right) worked on the app with his mentor Dr. Vince Day, program director for computer science and interactive technologies at SCH Academy, through the school's Venture Incubator program.

Zach Schapiro ’22 was growing impatient as he waited for his family members to figure out their next move in a game of mahjong (or mah jongg), when he realized there was something he could do to help: develop a mahjong app.

Schapiro spent well over a year building an app called Mahjongg Accomplice (available in the App Store), which analyzes players’ tiles and suggests the top five hands they should play. The app allows players to select their risk comfort level, save hands for review later on and to play their “usual hands,” according to their preferences.

“I thought I knew how to play the game pretty well,” Schapiro said. “Selecting the right hand can be the most difficult part. I did a test where I would record how often I won with and without the app, and it made a pretty significant difference. It’s a great way for new players to learn the game and gain confidence with how they play.”

American mahjong, which originated in China, is similar to gin rummy in that players pick up and discard tiles from other players or from the deck to get the best hand and the most points. The game uses up to 144 tiles with various Chinese characters and symbols. Schapiro first learned mahjong when he was 7. The game has been enjoying a resurgence lately and has been popular among his extended family over several generations (including his grandmother who hails from Romania).

Schapiro, now a freshman at Springside Chestnut Hill Academy (SCH), started to develop his app in the Center for Entrepreneurial Leadership (CEL) Venture Incubator program when he was in seventh grade. The Venture Incubator is an extracurricular offering that supports students who are interested in bringing a venture idea to life. Former students in the CEL Venture Incubator have gone on to create products ranging from a babysitting service to a nutrition and exercise education program for underserved kids to a web platform that connects high school students in the college search process with undergraduates at their college of interest.

Dr. Vincent Day, program director for computer science and interactive technologies at SCH, served as Schapiro’s Venture Incubator mentor, helping him learn the basics of how to create an app, then tailor the app’s features and functionality to his preferences.

“He has the ability and desire to go out and learn on his own, and that’s what makes for a good programmer,” Day said.

Day added that Schapiro had to be creative, problem solve and stay resilient — which are hallmarks of the school’s CEL program — in order to complete this project.

The two met once a week for an hour; Day also set Schapiro up with an external expert in app development for an hour per week, but he stressed that Schapiro was the number one person responsible for writing thousands of lines of code and spending over 1,000 hours working through bugs and various challenges.

When the Venture Incubator class ended, Schapiro continued working on Mahjongg Accomplice, and his app was accepted into the Apple app store right before the 2018-2019 school year started. To be accepted, he had to create a developer account, test the app, provide a USB version of it to Apple and pass the company’s two-to-three-day review. He is also working on getting the app into Google Play. Schapiro said he is always looking for ways to improve the app and has an email dedicated to suggestions: mahjonggaccomplice@gmail.com.

In the few short months it has been available online, Mahjongg Accomplice has been downloaded by people from around the world: the United States, China, Japan, Germany, United Kingdom and India. The app is free, but Schapiro is considering an in-app purchase for new annual cards that the National Mah Jongg League designs each spring.

“Whenever I see someone using it, even if I’m playing against them, I always feel happy when they win because of the app,” Schapiro said. “I think, oh I just lost to my own app. I didn’t really lose to them.”

Schapiro came to SCH in fifth grade, after attending private preschool and a few years of public school. He said that while many different things at SCH appealed to him, it was the CEL offerings and the robotics program that really drew him to the school.

“These were two different areas that I had lots of interest in, and I have really enjoyed classes and extracurriculars in these two programs,” he said.

In addition to coding in CEL classes and his work in robotics, Schapiro is the current president of the chess team and is also involved in debate, science fairs, golf, tennis and math competitions, and also plays trumpet in the jazz band.