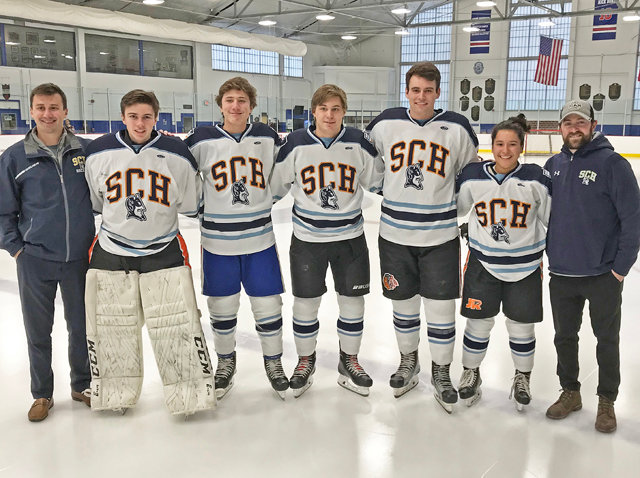 Pictured here with their coaches, the five seniors on the Springside Chestnut Hill Academy ice hockey team were given a send-off last Wednesday at their final home game. (Photo by Tom Utescher)

Springside Chestnut Hill Academy held a Senior Recognition Day ceremony last Wednesday, just before the school's ice hockey team played its final home game at the Wissahickon Skating Club. After the contest, visiting Academy of the New Church was glad to never have to face the members of the Ice Devils' Class of 2020 again, particularly Ethan Gyllenhaal.

After the ANC Lions took a 2-0 lead in the game, Jonathan Brady, one of two Penn Charter students who play with SCH, got the home team on the board with an assist from one of the Devils' seniors, Eva Hamel.

ANC went up 3-1 early in the second period, but after that Gyllenhaal fired in four goals to power Springside Chestnut Hill to a 5-4 victory and a berth in the Independence Ice Hockey League playoff semifinals. His classmate Liam Peterson was in goal to fend off ANC's attempts to tie the game in the closing minutes.

In addition to Gyllenhaal, Hamel, and Peterson, the other seniors participating in the pre-game ceremony were Jake Norpel and Brandon DeYoung. Gyllenhaal will be going on to play lacrosse at Bucknell University, and Hamel will play ice hockey for William Smith College.

Norpel and Peterson are undecided, and DeYoung, a Penn Charter student, will attend Tulane University.

The game didn't begin well for the SCH Ice Devils. ANC got on the board in the opening minute as Gavin Johns popped in the puck from a few feet outside of the left post. He came close to scoring again from the same spot a little later, after an SCH shot by Norpel was blocked by Lions goalie Max Hoffman.

A little later, Hoffman covered the puck when SCH sophomore Sam Berger tried to stuff it in from short range, and Hoffman also made a save when a pass from Gyllenhaal set up a promising shot by Brady.

ANC's Jake Peppelman gave the visitors a 2-0 lead with six minutes left in the first period. With defenders around him, he carried the puck in through the right face-off circle and scored as SCH's Peterson appeared to be at least partially screened on the shot.

This time, the home team responded quickly, wiping the zero from the home side of the scoreboard with Brady's goal assisted by Hamel. New Church still led 2-1 at the end of the period.

The Lions had a slashing penalty called against them that bridged the first and second periods, but almost as soon as they got back to even strength early in the second they scored on a rush up the ice. The lead was bumped to 3-1 by Wade Courtney, with an assist by Hayden Sapato.

Another ANC assault ended with Peterson dropping to the ice to smother the puck, then after that Springside Chestnut Hill began to take the initiative.

With Brady and Hamel assisting, Gyllenhaal fired a high shot from the right that deflected off of Hoffman's left glove into the net with 10:28 left in the second round. A few minutes later, Hoffman used his shoulder to save a similar shot by the SCH senior.

With the clock down to 4:45, Gyllenhaal came up the ice and split two ANC defenders to open himself up to score, and the game was tied 3-3. He scored a minute later on a similar dash up the ice, this time getting off a wide-open shot after a Lions defender fell down.

Gyllenhaal then put the Ice Devils up 5-3 with 2:41 to go in the second, slapping a shot from above the right face-off circle and getting another deflection off of Hoffman that put the puck in the cage.

The third period began with that two-goal lead intact, and ANC had to kill a holding penalty that was called just 35 seconds into the frame. With a little over 10 minutes left SCH got a scare when a Lions attack from the left side resulted in the puck drifting loose outside of the left post for a second. No ANC players were able to get in position to capitalize on this opportunity, though.

Much later in the period, the Ice Devils weren't so lucky when they let the puck linger in the area in front of their goal cage. SCH was unable to clear the disc away before Patrick McCabe scored for the visitors to make this a one-goal affair.

That occurred with 4:06 remaining, and Springside Chestnut Hill was able to fend off ANC attempts to tie the match going down the stretch. Peterson made a skillful stop near the left post, then on an ANC rush up the middle, SCH sophomore Galen Kilfeather was able to tip the puck away from the lead Lion.

With a little over a minute to go it looked like the Ice Devils might pick up an insurance goal with a charge by Gyllenhaal, but New Church got a nice glove save from Hoffman. Before long, the horn signaled an SCH victory.

The visiting Lions ended up with a 20-17 lead in shots, but they also were the recipients of the only two penalties called in the game.