Host Springside Chestnut Hill Academy won the tennis matches at the top and bottom of the line-up sheet last Tuesday, but visiting Germantown Academy took the five bouts in between. 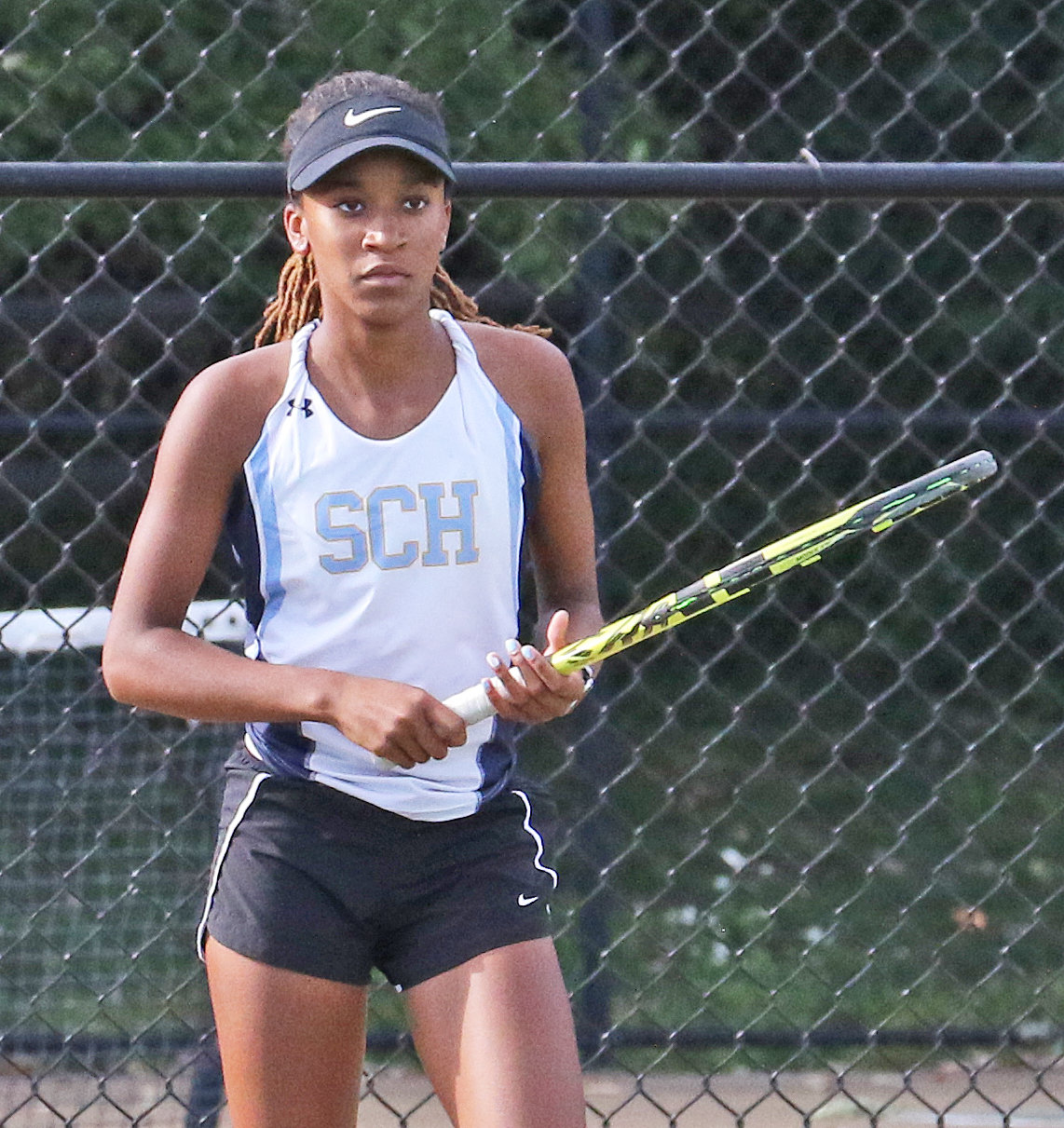 Blue Devils freshman Leah Thomas has been a dominating presence at number one singles.
Photo by Tom Utescher 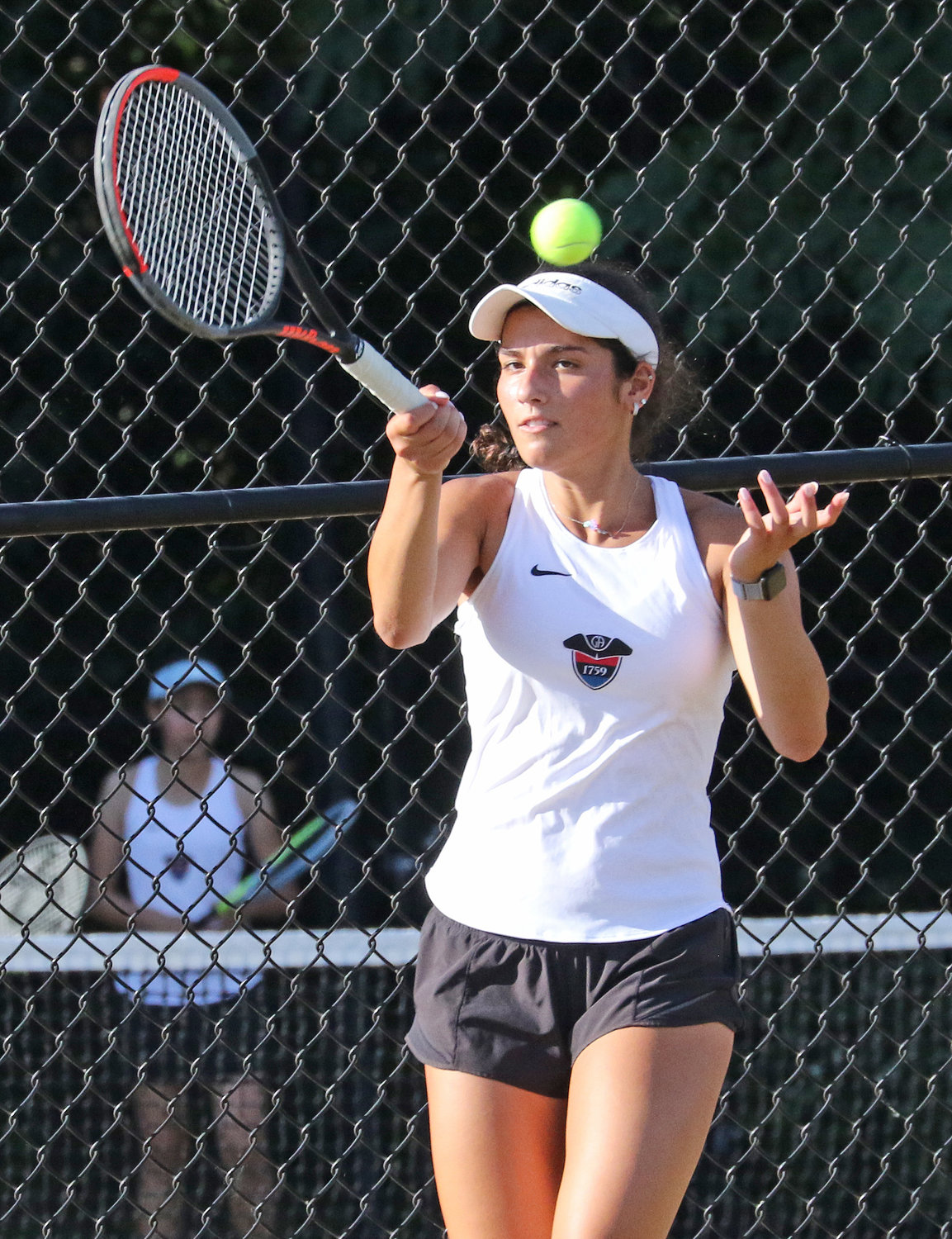 Host Springside Chestnut Hill Academy won the tennis matches at the top and the bottom of the line-up sheet last Tuesday afternoon, but the visiting Germantown Academy Patriots took the five bouts in between for a 5-2 Inter-Ac League victory.

It was the first league win for GA, which had a rough start to the Inter-Ac schedule with 1-6 losses to defending champ Episcopal Academy and to Agnes Irwin School. The second-year head coach for the Pats, Jon Freeman, is actually a 1994 graduate of the old Chestnut Hill Academy.

Debra Misbin, the junior varsity coach at SCH last year, has now taken charge of the Blue Devils' varsity squad. Returning as varsity assistant coach is Andrew Silverman, who in the past served in the same role at Chestnut Hill College. Silverman will now be a full-time presence on the SCH campus, joining the physical education department.

After early non-league victories over Shipley School and Germantown Friends, the Blue Devils opened league play by beating Agnes Irwin. Just prior to the GA match, the Devils were edged out by Penn Charter, 3-4.

In last week's GA match, SCH freshman Leah Thomas continued to dominate at the first singles spot, remaining undefeated as she dispatched the Patriots' junior number one Jessica Wang, 6-1, 6-0. She is a new student at the school this fall, having come from Greene Street Friends. Her classmate Ella Brown, the Blue Devils' number two, is also new to SCH, arriving from another elementary/middle school, Independence Charter in Center City Philadelphia.

GA senior Ava Toren topped Brown in their opening set last Tuesday, 6-3, then Brown prevailed in the second, 7-6 (3) to force a third set. A super tiebreaker was played instead of a full set, and Toren won it, 10-8.

With the arrival of the freshmen players at SCH, senior veteran Emma Bradbury is now performing at the third singles position. She fell to another senior, GA's Clarissa Smith, by a score of 6-2, 6-4. Bradbury's primary sport is lacrosse; she has committed to play for the University of Michigan.

Like the win at number one singles, Springside's second victory also came early in the day. In fourth doubles, Blue Devil seniors Annie Gu and Sofia Foote won, 6-2, 6-1 against a pair of GA freshmen, Edie Leon and Audrey Yu.

The Patriots would capture each of the other three doubles contests. At number one, GA junior Grace Petersohn and freshman Rebecca Rong ground out two 7-5 sets against SCH senior Winslow Tracy and sophomore Farah Horgan.