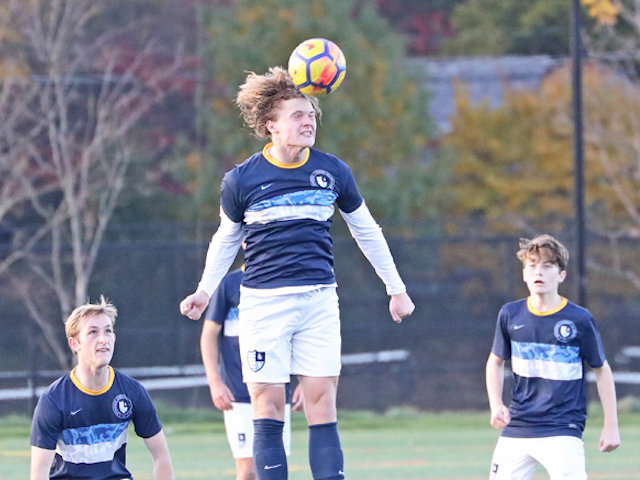 The current boys’ soccer program at Springside Chestnut Hill Academy is known for the big, fast forwards who provide the scoring punch up front, but as the Blue Devils have advanced through the first three rounds of the 2018 Pa. Independent Schools tournament, they’ve won two of their matches by 1-0 scores.

The second of these one-nil contests, a semifinal played at SCH last Thursday afternoon, got the team past Kiski School and back to the PAIS championship game. Senior Luke Greenburg penetrated the Cougars’ cage seven minutes into the contest and the third-seeded Blue Devils made that lone goal stand up for the victory over number 10 Kiski.

Springside Chestnut Hill was the exception in the semifinal bracket in not being a boarding school. In Thursday’s other semi, Hill School defeated Mercersburg Academy, 2-0, setting up a rematch of last year’s Indy Schools final, in which Hill emerged on the short end of a 2-0 tally.

Both Hill and Mercersburg are members of the Mid-Atlantic Prep League, and Hill is the 2018 MAPL champion. Back in late September, Springside Chestnut Hill won a non-league regular-season match over the Hill Blues, 1-0.

SCH’s semifinal opponent, Kiski School, is located about 30 miles east of Pittsburgh and is composed almost entirely of boarding students hailing from 18 different countries. Earlier in this year’s PAIS tournament, the Cougars pulled off a pair of 4-3 wins against two higher seeds, number seven Westtown School and number two Haverford.

The Blue Devils had to battle to a 1-0 win in the first round over fellow Inter-Ac League member Germantown Academy, which had been seeded 14th. SCH then took down another league rival, number 11 Malvern, 3-0. This was in a quarterfinal match on Tuesday of last week, when Greenburg scored twice for the local booters and fellow senior Philip Burckhardt netted the other goal.

Although Kiski is located on the far side of the state, SCH head coach Brian Zalasky was able to learn something about the Cougars beforehand.

“They play a different style than what we’re used to seeing,” he related. “We were able to find some game video, and I talked to a couple of coaches who played against them.

“The consensus was that their center backs are solid and they do some creative things up top and on the outside,” the SCH skipper continued. “We felt we would be fine going forward on the field as we usually do, spreading things out and then having our forwards run through.”

On defense, the Blue Devils wouldn’t want to become absorbed in their opponents’ footwork, and had to avoid taking the bait on feints.

“We told the boys we needed to be compact on defense and be mindful of their wingbacks pressing up on the outside. The main things were to know when to drop in and to just keep everything in front of you.” 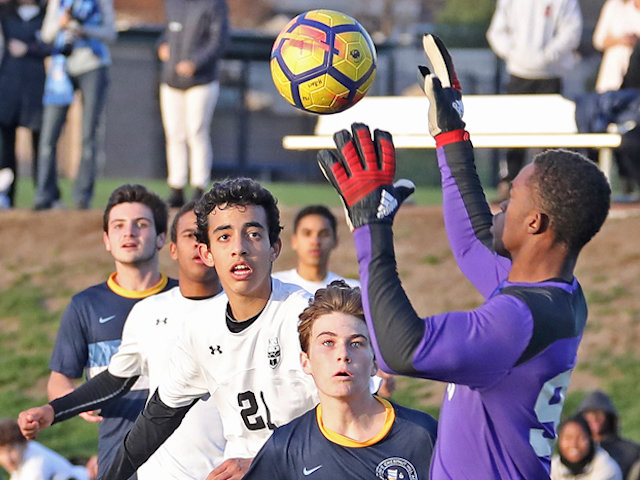 SCH and Kiski School players line up to watch Kiski goalie Mackai Gittens (right) grab the ball out of the air. (Photo by Tom Utescher)

Zalasky’s team took the action to Kiski at the outset, with a number of runs and several shots. Cougars goalie Mackai Gittens, a freshman from Bermuda, was not tall, but he was wiry and quick and made some impressive saves.

He knocked down a strong outside shot from the right taken by SCH junior Dane Harmaty around eight minutes into the game, but Kiski defenders could not clear the loose ball from in front of the goal. The Blue Devils’ Greenberg closed in to jab the ball into the net. The large crowd of spectators probably wouldn’t have predicted that what turned out to be the final score of 1-0 was now up on the board with 32:46 still remaining in the first half.

Gittens saved another ball blasted at him by Harmaty, and then at the other end SCH senior keeper Owen Elliott (a Penn State recruit) pocketed a relatively routine header. With about 18 minutes to go in the half a mob of attackers and defenders assembled in front of the Kiski cage and pinged the ball around, but in the end the Cougars kept it out.

At the far end a few minutes later, a well-struck serve for the visitors sailed toward the middle of the SCH box, launched by South African junior Mark Shoebridge. Burckhardt headed it back out for the hosts, but Kiski kept the ball in its offensive half.

The Cougars came as close to tying the match as they would all day with 14 minutes remaining in the period. Ricardo Santinelli, a junior from Mexico, sounded a gong as he booted the ball hard into the right goalpost. A senior from Spain, Javier Munoz Perez, couldn’t quite find the angle on a shot from along the left endline, sending the ball into the outside of the net panel nearest him.

On an aerial serve inside and then on a corner kick by the Cougars, the ball was cleared out by the foot of freshman R.T. Gentner and then the head of junior Matt Bown. With the first period winding down, the ball tracked a little too high on an attempt by a Kiski senior from Brazil, Henrique Felix de Siqueira.

The Cougars had recovered from their case of bus-lag early in the game to press hard for the tying goal, but the Blue Devils were still ahead at the half.

There was no change in the tally during the second 40 minutes, as well, with both teams generating a good deal of activity on offense. Considering that Kiski had put away four goals in each of its first two tournament games, the clean sheet turned in by SCH’s Elliott and his defenders was an impressive achievement.

The Blue Devils graduated some dependable backs from their 2017 team, and knee surgery deprived them of their best returning defender, senior Jack Myers, this season. Younger players stepped up into the breach.

Sophomore Connor Koschineg, the first member of his class to start for the team last year, has shifted to center back after previously performing as a defensively-oriented center midfielder. His classmate Christian Vetter saw some action last year, and has developed into a reliable defender along with Gentner, a ninth-grader who physically can hold his own with older rivals, according to Zalasky.

“We did what we needed to do defensively today,” the coach summed up.

They did it well enough, in fact, to make another trip to the PAIS championship game at Immaculata University. The match will get underway on Wednesday evening at 7:30 PM, following the girls’ final between Baldwin School and Episcopal Academy.

Inter-Ac League action concluded last Saturday, with all six boys’ teams in action. The parity of the league was highlighted as defending champion SCH had to go into overtime to defeat last-place Malvern Prep, 2-1. With a win good for three points and a tie counting for one in the standings for the Inter-Ac (which has no championship tournament), the Blue Devils wound up with 19 points thanks to their 6-3-1 record.

With some help, SCH could have tied with Haverford School for the 2018 title, but it only could’ve happened if the Fords and the Episcopal Academy Churchmen fought to a draw in their traditional league finale. Instead, a 4-1 victory had Haverford clinching the championship outright with a 6-1-3 finish for 21 points, while SCH was runner-up and Episcopal was third (5-3-2 = 17 points).