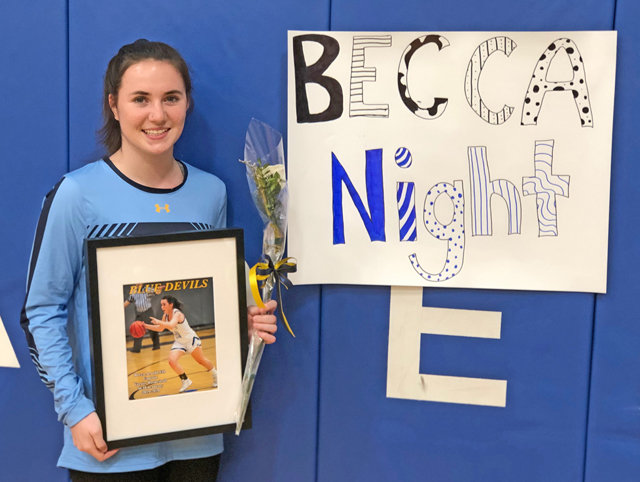 In their final home basketball game, the girls of Springside Chestnut Hill Academy were tied 22-22 with visiting Baldwin School early in the second half. By the end of the third quarter, though, Baldwin had opened up a 10-point lead, and the Bears went on to win, 49-35.

Nevertheless, is was a much closer outcome than when the teams first met in the middle of January, when Baldwin won 59-26 on its home court. Raising its record to 3-8 in the Inter-Ac League with only last-place Agnes Irwin left to play, Baldwin appeared headed for a fifth-place finish. Two wins over Agnes Irwin were reflected in the Blue Devils' 2-8 league record, and SCH would seem to be destined to wind up in sixth place unless it can pull off huge upsets against its last two opponents, league leader Germantown Academy and number three Academy of Notre Dame.

Before the game, Springside Chestnut Hill celebrated the career of the only senior on the 2019-20 roster, guard Becca Arnold. Arnold, whose primary sport is softball, was out of action since she was following concussion protocol.

Head coach Flo Hagains remarked, "She's a leader on the floor, and she brings a different energy as the only senior on our team. I've been here for four years and I've seen her go through to her senior year. She can definitely give the younger girls some insight; what to expect and what they need to learn."

It would be important for SCH to get off to a good start, and the Devils did, with Chavez hitting a lay-up and a three-pointer in the opening minute. Freshman Frankie DiMichele added a free throw while Baldwin put in two shots from the foul line, and when Chavez fired from the right flank for a second "three," time-out was called with 3:30 left in the opening period and SCH leading, 9-2.

After play resumed Baldwin's Brown made a lay-up for the visitors' first field goal of the contest, and by the end of the quarter the Bears were back within four of the Blue Devils, 11-7.

When the second round began Brown scored twice in the paint and Weiser drove for another Baldwin basket, moving the Bears in front for the first time, 13-11. Freshman Tatyana Hall hit a three-pointer for SCH, and when McDermott also struck from the arc a little later, the Blue Devils had retaken the lead at 17-16. In the late minutes of the half, a lay-up and a pair of free throws would give the visitors a 20-17 advantage at the intermission.

As the second half got underway, McDermott took the ball the length of the court to score. Brown answered for Baldwin, then Chavez put in a long trey from a few feet above the top of the key, lifting the Blue Devils into a 22-all tie with their guests.

With a little under two minutes elapsed, the Bears' Weiser responded from the three-point loop, and Baldwin would lead the rest of the way. The only other SCH field goal during the remainder of the third quarter was a put-back by sophomore forward Layla Sawyer.

Going into the fourth quarter with a 36-26 lead, the visitors never let Springside Chestnut Hill get closer than nine points after that, eventually winning by 14.

The Blue Devils have gone through the season with a young team and very few true basketball players. A number of the girls excel at other sports though, and have been able to make improvements.

"In the second half of the season we started to learn to break the press and spread the floor out more," Hagains pointed out. "We're still young, and we're still relying on jump shots more than attacking the basket, so we're working on that. In the offseason we plan on working these girls out and finding small tournaments to keep them together."