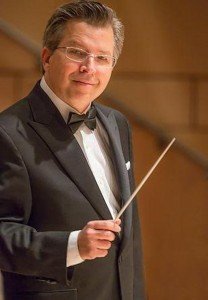 Michael Ludwig will conduct the Roxborough Orchestra in concert Saturday, July 23, 8 p.m., in the Venice Island Performing Arts Center, 7 Lock Street in Manayunk. The program includes W.A. Mozart’s ‘“Prague’ Symphony No. 38 in D major” and Johannes Brahms’ “First Symphony in C minor.” Admission is free with no tickets required, and seating is open.

Conductor Ludwig explained that the Roxborough Orchestra was founded in 2013 by violinist and teacher Giuseppe Agnello, a resident of the Roxborough section of Philadelphia who wished to establish a community orchestra in his own neighborhood. For the July 23 concert, the ensemble will include between 45 to 50 players.

“This is a community volunteer orchestra,” Ludwig said, “comprised of committed musicians of a very high level. Some of the members do perform professionally on occasion in Greater Philadelphia, but they all come together here for the love of the art. The membership is drawn from Philadelphia and its surrounding suburbs, including South Jersey.

“The orchestra’s mission,” Ludwig continued, “is to promote, encourage, and foster the appreciation of the musical arts in Roxborough and the surrounding sections of the city through its concert performances.”

“I studied conducting with the great pedagogue Gustav Meier,” Ludwig explained, “traveling to his studio in Baltimore at the Peabody Conservatory of Music (of the Johns Hopkins University) for private instruction. I have also participated in conducting workshops in Bulgaria, Ukraine, Queens (NY) and South Carolina with Meier, Larry Rachleff, Donald Schneider, Donald Portnoy and Maurice Peress.”

Ludwig’s engagements as a conductor include leading the Buffalo Philharmonic in performances of all six of J.S. Bach’s “Brandenburg” Concerti. Locally, he has conducted the Lansdowne Symphony Orchestra (which his father Irving directed for many years) and the Delaware County Symphony Orchestra. He was appointed music director of the Roxborough Orchestra a year ago, and his wife, Rachel, is the ensemble’s general manager. A violinist as well, she and Michael appeared as soloists in Bach’s “Concerto for Two Violins” in March of this year.

“Conducting gives me an additional platform as a teacher,” Ludwig pointed out. “I have conducted the Skidmore College (NY) Orchestra, the All-Catholic High School Orchestra of Philadelphia and the Luzerne Music Center Orchestra. I’ll also be conducting the South Jersey Honors Orchestra in January next year. Education has become an integral part of my musical career and is profoundly important to me. I am excited to join the faculty of the John J. Cali School of Music at Montclair State University (Jew Jersey) this coming fall as adjunct professor of violin.”

“Daron composed his concerto for me, and Ken dedicated his ‘American Rhapsody’ to me,” Ludwig explained. “These are two beautiful works that I am so excited to bring to the stage in my hometown. And I am also thrilled to perform the ‘Glazunov Concerto’ with Louis Scaglione and the Philadelphia Youth Orchestra as well as the ‘Bruch Violin Concerto’ with Rosalind Erwin and the Drexel University Orchestra.”

Regarding his philosophy when it comes to choosing repertoire for the Roxborough Orchestra, Ludwig said, “ I take into consideration the instrumentation we have at our disposal as well as the difficulty of the works that I consider. This program is as challenging as it could be. We are stretching our limits to program the ‘Brahms First Symphony,’ but I know that the orchestra is up to the challenge. We recruit the very best community players in the region, so this is a group of musicians who really work hard and strive to elevate their level of performance.

“My father always worked at the highest artistic level with his orchestra, the Lansdowne Symphony, and it had exacting standards,” he continued. “I find it so gratifying that many of our musicians in the Roxborough Orchestra worked with my dad over the years, so this feels like a continuation of the legacy he left us.

“I hope that we will expand our repertoire in the coming concerts to include new works as well as some more esoteric choices that folks might not often have had the chance to either perform themselves or to hear in concert.”