Vanessa and Rob Mullen took over Campbell's Place in 2008. by April Lisante It sits on the corner of Germantown Avenue and Gravers Lane, a familiar local fixture with its burgundy door and unassuming … 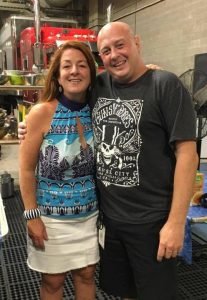 Vanessa and Rob Mullen took over Campbell's Place in 2008.

It sits on the corner of Germantown Avenue and Gravers Lane, a familiar local fixture with its burgundy door and unassuming brick façade.

Need a place to go to chat with neighbors over lunch in a cozy booth? A place to charge your phone when there’s a big snowstorm? How about a place to get engaged, or take the kids for dinner? Locals liken it to their very own “Cheers,” but this resto-bar legend is the one-and-only Campbell’s Place, 8337 Germantown Ave.

This month, the upscale comfort food eatery known for its Paulie Burgers and cheesy fried Brussels sprouts is celebrating a big anniversary of sorts.

Though Campbell’s has been around for nearly 50 years, the last 10 years have been under the ownership of dynamic husband and wife team Rob and Vanessa Mullen. The couple bought Campbell’s in 2008 from longtime owners Mary and Jim Campbell, and since then, have thrown their hearts and souls into making Campbell’s thrive, creating a homey neighborhood haunt and dedicating themselves to countless charitable causes in the process.

Vanessa, who grew up in Chestnut Hill, met her chef-hubby Rob years ago while both were working at the restaurant Cuba Libre in Old City. Though Rob heads the gastropub’s kitchen, he also manages to cater food at the Wells Fargo Center, The Mann and on tours for celebrity musicians like Beyonce and Jay Z and U2. This year, the couple also partnered with chef Al Paris at Paris Bistro down the street, at 8235 Germantown Ave., adding to their local commitment. And as if that doesn’t keep them busy enough, they are parents to two boys, ages four and nine.

This month, as this whirlwind duo celebrates their 10th anniversary at the Hill institution, we sat down to chat about their beloved restaurant and all things culinary.

Q: So in 2008 you decided to buy Campbell’s Place. Vanessa, you are local to the community. What made you decide to buy it and how did you want to have it continue to be a community-based business?

“As a kid, I knew it just like every other kid, coming with your parents, a warm sort of cozy place with friendly faces. A lot of people inquired about purchasing it and a lot of people, you know, made offers. And somehow, Mary selected us to take it over, and I think it’s because she knew in her heart of hearts that we would care for it. We did start in 2008, which was a recession and not a great time to start, but the community sort of supported us. I grew up in the community, and because this is sort of an institution, they supported us. And now we support them back. You know, we do a lot of benefits like Meals on Wheels and children’s school and neighborhood schools, so if it has anything to do with the community. We employ regulars’ children; we source from Erdenheim Farms now; we started out with a bank that was local; every possible local we can support we can.”

So what is one of your fondest memories over the last 10 years? Anything come to mind?

(Rob Mullen) “I’d say the fondest is probably snow days (when we are open all day for locals). And also for me, Christmas Eves are fun. We’ve always kind of had the thought process of we are open Christmas Eve for anyone who, you know, is around…on top of that it’s like our whole staff usually shows up on Christmas Eve. We all kind of get together and have a drink together with the staff. They are like family -- a lot of our staff has worked with us forever. They come to parties at our house, they come to the kids birthday parties -- it’s family, you know? Also, St. Patrick’s Days are great. My uncle plays Irish music. He gets a band together and we have Irish music in here.”

Rob you also do celebrity catering. You started out at small venues like the Electric Factory but now you do the Wells Fargo Center and the Mann, and also have your own company that takes you on the road, most recently on the American and European legs of Beyonce and Jay Z’s “On the Run II Tour.” So what is this like, and we have to know: what do they eat?

“It’s a lot of hard work. It’s long hours. You are getting up at 5:30 in the morning, unloading a semi truck with all the equipment, setting up a full kitchen and then cooking breakfast, lunch and dinner, then breaking it all down and putting it in cases and loading it back on the truck. It’s something that blows your mind the first time you do it. We’re up at 5:30 in the morning and going ‘til 10:30, 11 at night. It definitely makes coming into a restaurant and working look a lot easier. (Beyonce and Jay Z) eat mostly vegetarian. She’s vegetarian, and he basically would eat whatever she was eating.”

As you look back on these last 10 years, you have been committed to the local culinary scene. What do you guys think of the evolving scene here in Chestnut Hill?

(Rob Mullen) “I like it, I think it is very up and coming still. We have a very diverse selection here in Chestnut Hill. We have obviously Campbell’s Place, which is elevated comfort food, I would say. We have Mexican, the (Iron Hill) Brewery, Paris, Indian.  I think it’s very diverse.”

(Vanessa) “It’s funny, though, how little recognition comes to the culinary scene. I mean we don’t get recognized. Somehow when the end of the year awards or the notoriety from neighborhood to neighborhood, somehow they skip right over us (Chestnut Hill restaurants), which is shocking. There are so many reasons to come to Chestnut Hill. The culinary doesn’t have to be the kingpin, but it is a wonderful addition.”

Throughout December, Campbell’s Place celebrated its 10th anniversary with 10 percent off each $100 gift certificate. In January and February, diners will receive a “Red Envelope” with their meal checks. Inside each envelope will be a free giveaway for the next visit, from a free drink to a full dinner.