Elise Rivers is the founder and owner of Community Acupuncture of Mt. Airy, 6782 Germantown Ave., which is currently celebrating 10 years in operation and will soon become a wellness center. (Photo … 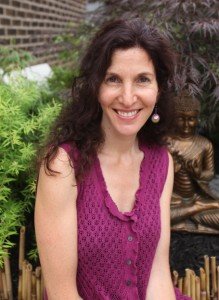 Elise Rivers is the founder and owner of Community Acupuncture of Mt. Airy, 6782 Germantown Ave., which is currently celebrating 10 years in operation and will soon become a wellness center. (Photo by Jana Small)

Heartening as spring’s first breath, Community Acupuncture of Mt. Airy (CAMA), 6782 Germantown Ave., promises seasons of healing to come. Crossing CAMA’s threshold provides a balm in itself, which I found when I became a patient due to a cranky digestive system.

Nag Champa incense, used at the doorway of sacred temples in India, wafted toward me. A bouquet of fresh flowers with vibrant reds and yellows took my mind off pain. The clean lines and soft colors of Asian accents invited calm.

“Beauty serves as a tonic,” said Elise Rivers, 49, of Mt. Airy, founder and owner of CAMA. “The psyche picks up on visual harmony and sets the stage for healing. The Asian décor honors the land where acupuncture began some 2500 years ago,” said Elise, a lawyer and graduate of the New England School of Acupuncture in Newton, Massachusetts.

Elise’s approach goes beyond the Asian aesthetic, soothing music and enticing choices like vanilla spice in the tea nook. “We gutted this building, which had stood abandoned for seven years, and rebuilt it as a green space,” she said. “Non-toxic paints, carpeting, cleaning supplies and an air-filtering system help to support patients’ health.”

Each of the four acupuncture practitioners here has a specialty, which broadens CAMA’s therapeutic reach, pointed out Elise, who keeps my digestive system happy while both she and another practitioner help my hair to regrow.

Both of them offered me something extra at no charge. Elise saw a bad bruise on my right leg and applied generous amounts of arnica gel. The other practitioner’s knowledge of herbs led her to suggest that I take black currant oil, which boosted my hair regrowth.

CAMA’s staff includes acupuncturists who address reproductive issues. “Treatments can influence women’s cycles so that they have a better chance of conceiving,” Elise says. “Acupuncture is also effective for asthma, headaches, depression and many other chronic conditions.”

At one point I hadn’t had acupuncture for a while and then flew back in a panic with my innards doing the Bristol Stomp. Elise pointed out that acupuncture yields maximum benefits with regular treatments, even once a month. “You get optimum health from regular treatments,” says Elise, who has practiced for 12 years.

Elise took a surprising route to acupuncture. She graduated with a degree from New York City’s Pace University School of Law in 1991. Concerned with the health of the planet, she specialized in environmental law. “Just as I would have begun, the government wiped many environmental laws off the books, so far fewer lawyers were needed in that area,” she said. So Elise practiced corporate law in the 1990s but found it emotionally unsatisfying.  She began studying acupuncture in 1999 after a bodywork treatment allowed her to experience “qi,” the life force energy at the heart of acupuncture.

With masters degrees in both Japanese and traditional Chinese medicine, Elise worked at a low-cost clinic in Northampton, Massachusetts. In 2004, she and her husband Max, a professional mediator specializing in conflict resolution for couples, felt that they needed a denser population for their practices to thrive. A friend of Max’s who knew that Elise was besotted with old architecture recommended Mt. Airy.

Elise is now celebrating CAMA’s 10th anniversary this year and is poised for her next move: expanding CAMA into a wellness center. Given the bedrock importance of food and exercise, CAMA will offer customized wellness programs that will include juices, smoothies and exercise along with acupuncture, guidance about herbs and yoga therapy.

Elise brings balance to her own life with yoga, hiking, biking in Fairmount Park and experimenting with vegan recipes. In 2010, she raised money for public benches at William Allen Plaza (at the Lutheran Theological Seminary in Mt. Airy), and in 2012 she created a $2500 matching grant for the revitalization of Lovett Library Park in Mt. Airy.

CAMA will celebrate its decade of operation with a 10th anniversary event on Sunday, May 31, 1-4 p.m. Elise will also give a talk through the Mt. Airy Learning Tree entitled “Healing without drugs: a new wellness approach” on Sunday, May 3, 7:30 p.m. For more information, call 215-266-5757 or visit www.CAMAcenter.com