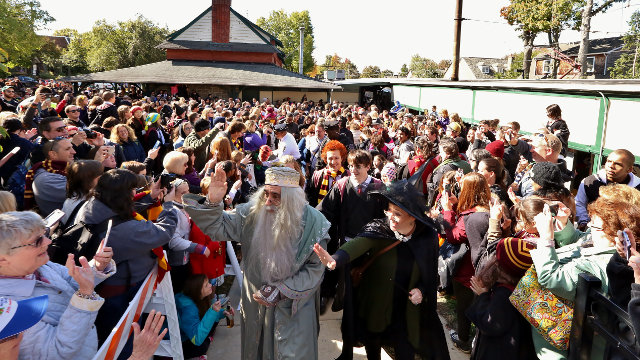 A scene from the start of the 2016 harry Potter Festival at Chestnut Hill West station.

After last year’s Harry Potter Festival concluded without the crowding and traffic problems of the prior year’s festival, the Chestnut Hill Business District staff and board thought they had found something on which they could build.

There were issues, however. The business district lost $50,000, in no small part owing to the expense of paying the city for police to aid with traffic.

But the template seemed to be there for holding a festival that had earned Chestnut Hill international recognition.

“We thought we had solved most of the problems,” said business district director Philip Dawson. “We were in the planning stages of turning it into a ticketed event to cover those costs.”

Then early last month the business district received a note from Warner Bros. that would prevent almost every aspect of the popular, day-long festival. Warner Brothers, which owns all the rights to the franchise told the district it couldn’t use any names or images associated with Harry Potter. It couldn’t even sell anything called butterbeer.

“We had gotten word that Warner Bros. had sent word to restrict a festival in Ithaca,” Dawson said. “We thought they might not crack down on us, but they did.”

So, an 8th Annual Harry Potter festival is now all but abandoned.

Warner Bros. has been relatively aggressive with the cease and desist letters surrounding Harry Potter. In October of 2009, Warner Bros. lawyers threatened to sue a 40-year-old U.K. woman for selling tickets to a Harry Potter-themed dinner party, the guest-list for which was not set to exceed 30.

While the business district is planning to host a Wizards & Wands pub crawl, that will focus more on general Halloween imagery and line up with a Harry Potter Academic Conference in October. The Harry Potter Festival that at its peak attracted nearly 50,000 people to the area will likely never happen again.

Not only has the business district taken a “wait and see” approach to activities on Saturday, the Chestnut Hill College Quidditch tournament that started the local Harry Potter craze to begin with, is in serious question as well.

The college, Dawson said, was certain to reduce the tournament and might even cancel it. He said the business district will be sure to connect people at the tournament to businesses and restaurants on Germantown Avenue, but it’s clear nothing will approach the Harry Potter Festival of the past.

Requests to the college for comment were not returned.

In the meantime, Dawson said the Chestnut Hill Business District is weighing its options and would like to do something around the Halloween season.

“Chestnut Hill has a lot of appeal, and we haven’t done much around Halloween,” he said.

Any events the business district comes up with will likely be well received, but the phenomenon of the festival, which had grown so expansive over the last decade, is not likely to be seen again.