Awbury Arboretum has received funding to restore its water gardens in order both to reduce the possibility of potentially fatal flooding along nearby Belfield Avenue and to resuscitate a beloved neighborhood amenity. 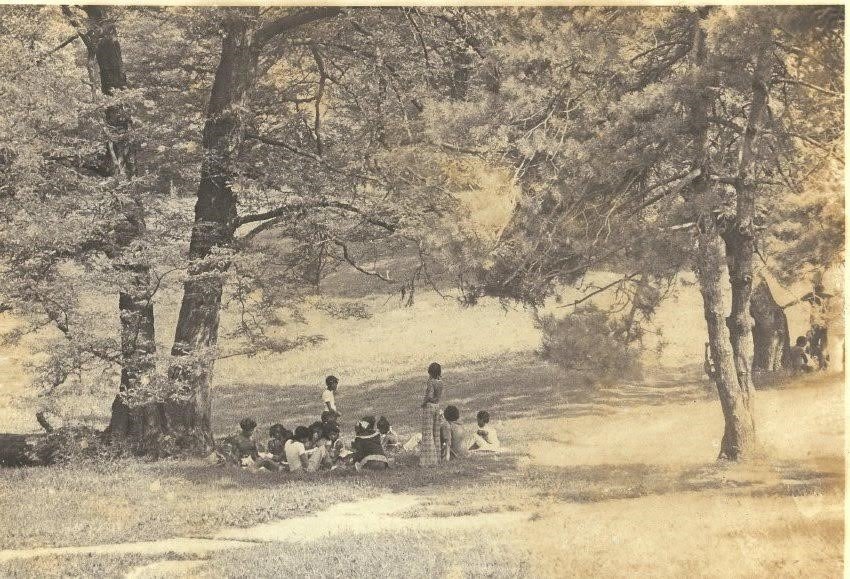 Children seated near the ponds, taken in 1976 by Edmund Gilchrist, Jr., son of the noted Philadelphia architect. Awbury Arboretum archives. 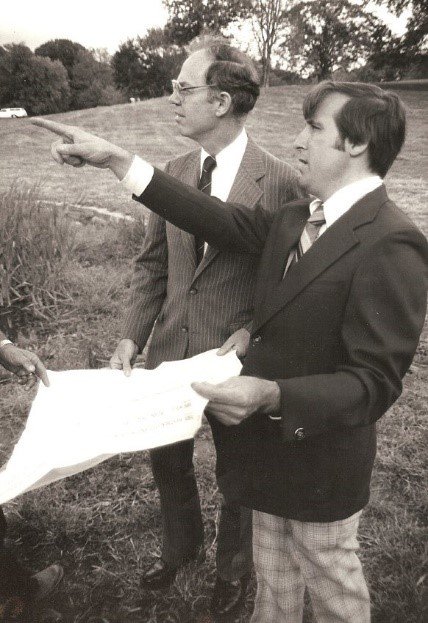 Reviewing the pond restoration plans in 1979 with Phillip Price, Jr., then a Pennsylvania state senator, and Doug Kane, director of Awbury Arboretum. Awbury Arboretum archives.
Previous Next
Posted Thursday, May 13, 2021 10:00 am
by George McNeely

The native peoples and early European settlers in Northwest Philadelphia were blessed with ample fresh water from many small streams that meandered through dips in the landscape, across woods and fields.  On the west side of Germantown Avenue, they flowed into the Wissahickon and Cresheim Creeks and eventually down into the Schuylkill River.

On the east side of Germantown Avenue, the Wingohocking Creek once flowed from several tributaries in East Mount Airy and East Germantown, across the flat farmland below what is now Wayne Junction, past James Logan’s estate Stenton, and emptied into the larger Tacony-Frankford watershed and eventually the Delaware River.

Through the 18th Century, those larger creeks powered the many mill wheels that fed and supplied both local residents and nearby growing Philadelphia.

With the commercial application of steam engines in the 1830’s, the Wingohocking Creek’s wider, flatter valley permitted the construction of larger steam-powered mills that were combined with bigger factories employing larger numbers of workers.  They became powerhouses for knitting cloth and such related finished products as clothing, uniforms and carpets.

In 1832, the first railway connection between Germantown and Center City opened, now known as the Chestnut Hill East line, and was extended to Chestnut Hill in 1954.

By the mid-19th Century, Germantown was thus both an industrial center and a particularly desirable residential neighborhood.  Handsome Victorian villas for the mill owners and railway commuters surrounded the sturdy 18th Century stone houses.  Those mills brought prosperity to both the older Quaker gentry of Germantown, including the intermarried Logan, Fisher and Wister families, and to new arrivals to the area.

In his “Reminiscences” published in 1920, local resident Jones Wister (1839-1917) recounted childhood pleasures along the creeks and millponds of East Germantown. “The happiness of our boyhood days was greatly enhanced by these bodies of water scattered through the neighboring valleys.  …  We boys grew up at a time when steam engines were almost unknown, and water wheels furnished power for small and large mills.”

That land includes one of the tributaries of the Wingohocking Creek, which starts from several springs on either side of Washington Lane, and continues down a modest valley towards Chew Avenue, under the railroad tracks, and eventually into the bigger and more commercial sections of the Creek.

The extended Cope family had that tributary structured into a series of descending ponds, with connecting channels crossed by stone pathways.  Visible from the adjoining meadows, the resulting water gardens became a defining feature of the family’s estate and attracted a wide range of wildlife.

But as the local population grew in the 19th Century, those larger creeks presented problems.  They became polluted by detritus from nearby houses, farms, mills and other businesses and served as convenient refuse pits for anything unwanted.  The resulting smells and potential for disease became a problem for political leaders.

The “consolidation” of the German Township into the larger city of Philadelphia in 1854 brought change.  City leaders started a mammoth urban renewal project to bury those polluted creeks all around the city in underground culverts.  Once-picturesque winding creeks, including the Wingohocking, were converted into huge masonry channels and usually covered over by landfill to create roads and developable land.  (Adam Levine, historical consultant to the Philadelphia Water Department, has carefully assembled information on that process at www.phillyh2o.org.)

The reminiscences of Jones Wister reveal his unhappiness about such changes.  “But the glory of the stream has departed; where we fished and swam and skated, sewers have been constructed to carry off what is now waste water.  Germantown lost its individuality in 1849 [sic] when it became part of Philadelphia.  Old Germantown is now only a memory.”

Around the beginning of the 20th Century, as the motorcar became more popular, such covered creek paths sometimes became newfangled “parkways” such as lower Belfield Avenue (over the Wingohocking Creek), Lincoln Drive (over the Monoshone Creek), and the eponymous Cobb Creek Parkway in West Philadelphia.

The Cope family quietly continued at Awbury, building additional houses for younger family members.  In 1916, much of the family estate was incorporated as the non-profit Awbury Arboretum, with 56 acres of open fields and woods around their private houses.

Around that time, they hired noted Philadelphia landscape architects Harrison, Mertz & Emlen to revive the water gardens, keeping at bay the inevitable erosion, silting and invasive weeds.  The Arboretum undertook another round of stream restoration in the 1970’s guided by Tourbier Westmacott Associates.

More recently, continuing nearby building has resulted in storm water management problems, particularly along the sections of Belfield Avenue built over the Wingohocking Creek.  Aggravated by more frequent and extreme storms due to climate changes, our city drainage systems are now regularly overwhelmed.  In 2011, flash floods caused the sad death of a lady who was trapped in her car on Belfield Avenue.

That and similar problems throughout the city resulted in the Philadelphia Water Department’s new storm water management guidelines in 2015.  Working with the Pennsylvania Horticultural Society, the city has been training residents on how to retain storm water and reduce such dangerous run off.

As part of the city’s wider plans, Awbury Arboretum has received funding to restore its water gardens in order both to reduce the possibility of potentially fatal flooding along nearby Belfield Avenue and to resuscitate a beloved neighborhood amenity.

This month, Awbury is celebrating the latest phase of that work at an event on Sunday, May 23.  Visitors may now explore that last surviving segment of the once vital Wingohocking Creek and experience again some of the carefree boyhood pleasures so poignantly remembered by Jones Wister.

For more information, please go to www.awbury.org.  Many thanks to Alex Bartlett, the archivist at Awbury, for his assistance.