Arlene Hilton, of Roxborough (formerly of Germantown), retired from a career with the city of Philadelphia and now performs as a professional jazz singer. On the last Thursday evening of every month … 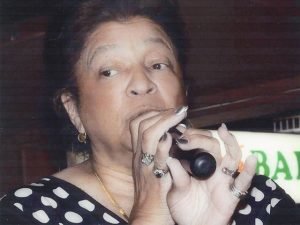 Arlene Hilton, of Roxborough (formerly of Germantown), retired from a career with the city of Philadelphia and now performs as a professional jazz singer. On the last Thursday evening of every month she sings with a jazz combo at Platinum Grill in Market Square, 7719 Crittenden St. in Chestnut Hill. More information at 215-247-2312.

When asked how she got into jazz singing, Arlene Hilton will tell you “it kind of fell into my lap.”

This Roxborough senior citizen, who requested that her age not be mentioned, has been “working” the jazz circuit in Philadelphia for the past five years and has truly made a name for herself. Whether performing at Maplewood Mall or La Rose Jazz Club in Germantown or Parlour Jazz at Platinum Grille in Chestnut Hill’s Market Square shopping strip, Hilton has a loyal following of jazz enthusiasts all over northwest Philadelphia.

“This whole new life for me is very surreal,” explains Hilton. “I have always loved music and have been singing since I was two years old, but my life took another path with a career and raising my son.”

Hilton was born in North Jersey and had professional training in New York as a child. “My grandmom told me I had a voice like Marion Anderson, an American contralto and one of the most celebrated singers of the 20th century,” says Hilton. “She insisted I go to New York and have singing lessons, which I did.”

After moving to Germantown with her parents and attending Germantown High School, Hilton did not keep up with her singing. She went on to enroll at Antioch College in Ohio, graduating in 1979 with a B.A. in Social Work. She married and had a son, a lawyer, who has held important positions in Philadelphia, working as an assistant to former Senator Arlen Specter in Washington, D.C., including Deputy Assistant to former President Clinton, and was a Vice President of Government Affairs for McDonald’s. She is also the grandmother of two and proud of their accomplishments.

Hilton retired a few years back after spending 16 years with the City of Philadelphia as Deputy Director of Personnel. “I have two regrets in my life, that I didn’t go to law school and that I retired so soon,” says Hilton. “My dreams of singing were put off for other important things in my life, but sometimes our joy has a way of following us.”

Nowadays, Hilton has reinvigorated her desire to sing, which is influenced by vocalists Anita

O’ Day, Chris Conner, Dinah Washington, Frank Sinatra, Betty Carter and Sarah Vaughn. She sees Jazz as an evolution from certain musical genres such as Ragtime, Dixieland, Gospel, the Blues and Swing. “The music touches my spirit inwardly,” she insists. “I am mesmerized by the manipulation of a single note, and I am in awe at an artist’s interpretation and expansion of the original melody. I feel their spirit and the genius behind what they do, even though I may not understand what they are doing.”

“It’s a lot of work to prepare for a show, and it can get tiring, so I perform one night and then take a few days off and then start all over again. I am not one to sit around the house and do nothing. I like to be out and about doing things, meeting new people and keeping my mind active. I very rarely watch television. I like to read and paint, and I love frequenting Chestnut Hill, especially Weavers Way and Paris Bistro.”

Hilton attributes her drive to keep singing to the support of her friends and family. “I have friends of all ages, and they come to all of my shows and have been there from the beginning. They marvel at how I can remember the words to all the songs. One friend videotaped my first two shows, and I couldn’t believe that was me singing; it was very surreal. People seemed to like what they heard, but I didn’t understand it because I couldn’t really hear it myself. It took me a year or so to internalize that I could sing.”

Hilton performs with local Jazz musicians on the last Thursday night of every month at Platinum Grill, 7719 Crittenden St. in Market Square. For more information, call 215-247-2312 or visit www.facebook.com/ahiltonm