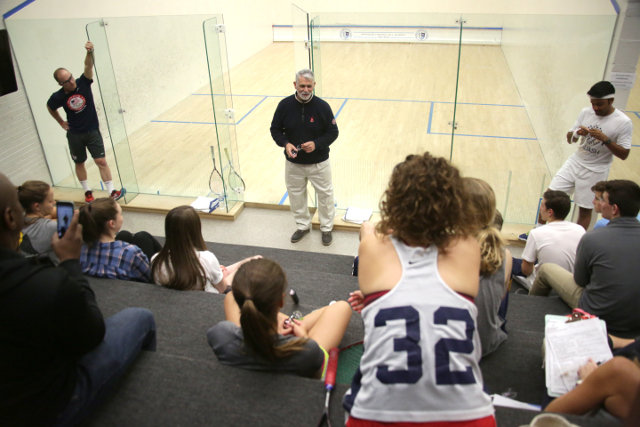 Paul Assaiante, perhaps the most renowned squash and tennis coach in the collegiate sports world, visited Springside Chestnut Hill Academy on Thursday, May 5, to give a talk on success.

Although recently retired from coaching tennis, Assaiante remains the head coach of the highly successful, long-lived dynasty that is the Trinity College squash team in Hartford, Conn. That team’s 14-year, 252-game unbeaten streak remains the longest of its kind in intercollegiate sports in the United States.

Assaiante wrote and published an acclaimed book called “Run To The Roar” with James Zug in 2010, which captured more than just his experiences as a coach. The book explains not only how to face one’s fears but contains a dedicated apology to his children for not raising them as he would’ve hoped, and how the squash arena is actually “nothing more than how you treat people.”

“You can accomplish amazing things by doing so,” he said.

Upon his visit to Philadelphia, Assaiante, often referred to as “Coach,” acted as commentator for exhibition matches at the Philadelphia Squash Club with professionals Gilly Lane (Chestnut Hill Class of ’03) and Parth Sharma (Trinity Class of ’10), as well as lead a clinic for members of SCH’s middle and high school squash teams.

Assaiante spoke with a crowd of ardent players, parents, and others in SCH’s Upper School Auditorium to hear his wise words. He showed a short clip that highlighted his achievements, including setting a consecutive 252 wins and 13 NCAA national titles record and other amazing statistics of the Trinity squash program under his reign.

These achievements, however, were not the subject of his lecture.

He discussed the importance of putting your best foot forward for everything you do.

In 2002, Assaiante suffered a stroke. He said he believed he was too hard on himself about trying to be the best coach.

“You need a balanced life,” he said, “in order to become a more productive human being.”

After Princeton had beaten Trinity and broken the long-lasting record in 2012, Assaiante admitted that it was the proudest day in his life as a coach.

“The look of tears and snot pouring down the boys’ faces showed me they had put everything in and gave it their all,” he said.

“Sports teach you how to win, lose, go on the fly, know when losing your cool isn’t just that, and life lessons through experience,” he said. “That’s why I became a coach.”