Here she comes again, sailing through the air under that parrot-handle umbrella. It is 1910 in Edwardian England as Mary Poppins returns to Quintessence Theatre for the holiday season. 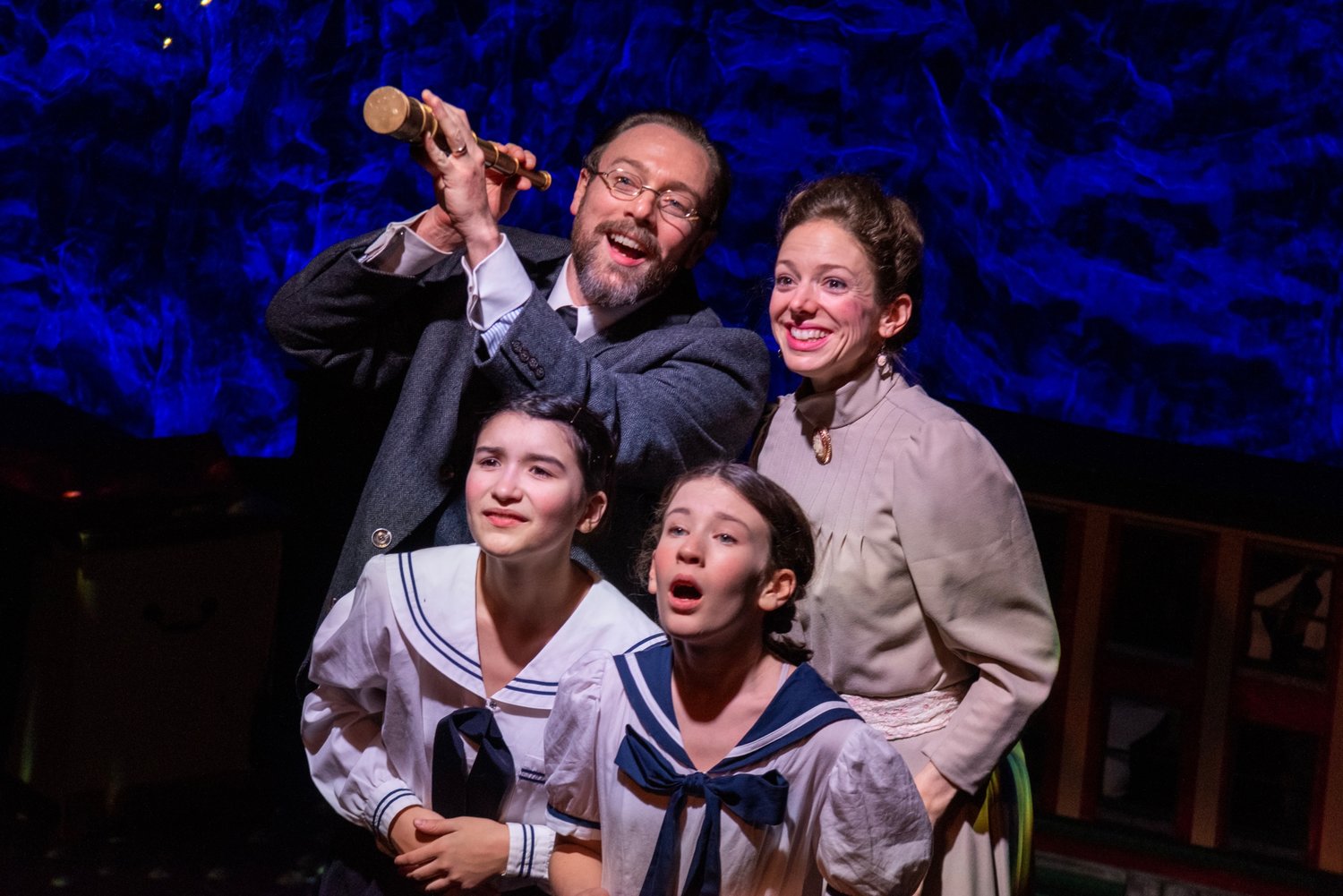 Here she comes again, sailing through the air under that parrot-handle umbrella. It is 1910 in Edwardian England as Mary Poppins returns to Quintessence Theatre for the holiday season. She wants to teach us what truly matters and to have fun to boot.

Based on the novels of P.L.Travers, most people know "Mary Poppins" from the 1964 Disney movie with Julie Andrews. In the Quintessence show, Hanna Gaffney more than holds her own. A previous Barrymore nominee, she gets you to believe this magical nanny is a real person.

Gaffney sings well, and sports a cagey smile as her Mary Poppins navigates the troubled Banks family. Gaffney is equally imperious and good-willed. In physical presence alone, she exudes a comic sensibility that playfully argues the family is committed to false, unloving values.

Bert is her partner in many odd acts of chivalry. Played by Steve Pacek, he captures the cockney zest of the sidewalk chalk artist and chimney sweep. But their relationship is a puzzle. While there is a hint of romance, mostly they just team up to help the Banks family by showing them how to love life for its own sake.

Australian-born P.L.Travers had a magical sense of life. She was fascinated with fairy tales as a child, and later developed interests in different folklore traditions and in the occult. She also had a dark side and was notably put off by the Disney movie, with its songs by Robert and Richard Sherman and cheery dance numbers.

Thus, Travers agreed to a musical re-creation of "Mary Poppins" under the guidance of Cameron Mackintosh. It came to fruition in 2004, with book by Julian Fellowes (creator of "Downton Abbey"), and additional music and lyrics by George Stiles & Anthony Drewe.

Director Emily Trask follows the Mackintosh script, which retains iconic Sherman songs like "A Spoonful of Sugar," "Chim Chim Cher-ee"(an Oscar winner) and, of course, "Supercalifragilisticexpialidocious." Stiles & Drewe add to the upbeat tone with their own song, Anything can happen if you let it."

But in keeping with P.L.Travers' dark and questioning side, the Mackintosh co-creation puts more focus on the troubled family: the pathos of patriarch George, (Jered McLenigan), neglected wife Winifred (Deanna Gibson) and antsy children Jane and Michael, (Sophie Aguilar and Raphael Sommer alternate with Sara Church and Ollie Gregorio).

The Quintessence production is flush with costume, choreography, props and incidental music. The light design of Anthony Forchielli is especially striking.

Changing blocks of bold color flood a fluffy, backstage wall to accent and forebode, much as music is used in cinema.

The show mirrors the magical world of young children even as it extols family love. Mary Poppins floats in under an umbrella. She pulls a coat rack and a large mirror out of her small valise – don't know how Quintessence did that. A park statue starts to dance. In the nursery, puppets come to life. If there ever was a show for the whole family, this is it.

"Little Women" also opened this weekend at Allens Lane Theater, Here too, the importance of loving family is central. Directed by Noel Hanley, children of all ages can identify with the Louisa May Alcott classic because the struggle of the maturing March children resonates universally.