The 130-year-old Victorian at 30 W. Chestnut Hill Ave. that the Chestnut Hill Historical Society feared would be demolished. They were able to save the home, but the trees on the property were … 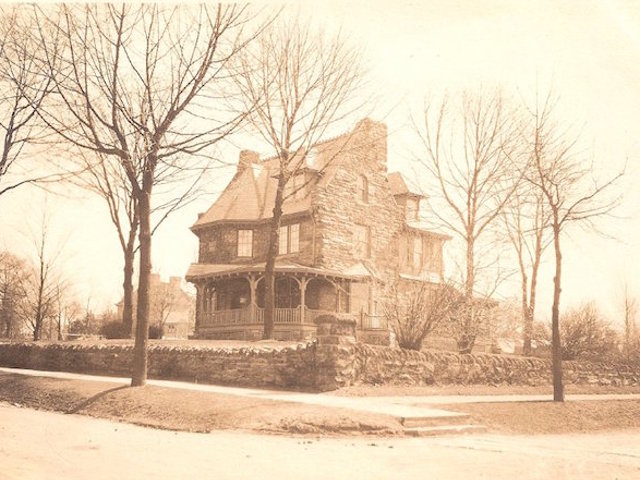 The 130-year-old Victorian at 30 W. Chestnut Hill Ave. that the Chestnut Hill Historical Society feared would be demolished. They were able to save the home, but the trees on the property were removed.

With the possibility of future, uncontrolled development, the board of the Chestnut Hill Community Association unanimously approved a motion to create a task force to protect and preserve the historical fabric of Chestnut Hill.

The vote followed a presentation on Feb. 25 by Lori Salganicoff, executive director of the Chestnut Hill Historical Society (CHHS), who warned of the threat that runaway development posed to the neighborhood’s open space as well as the buildings and properties deemed historically significant.

Salganicoff said the neighborhood, which in 1985 was added to the National Register of Historic Places, is now facing a “tsunami of possible new development on the horizon.” Included on the National Register, she said, are 2,700 buildings, of which only 90 or so are protected. An additional handful are protected by preservation easements and private agreements. As the nation’s first accredited land trust, the Chestnut Hill Historical Society holds open space easements on almost 100 acres.

But currently there is not a level of protection in place in Chestnut Hill that is equatable with its historic value, Salganicoff said. To demonstrate this imbalance, she used the recent controversy surrounding 30 W. Chestnut Hill Ave., a 130-year-old Victorian the CHHS worried would be torn down by its owners. Luckily, she said, it wasn’t, although the trees on the property were cut down.

“We can’t do that for 2,700 more buildings,” Salganicoff said. “We really need to band together and understand what are the most significant, special places that we need to protect here, and then protect them.”

Salganicoff said she welcomed the possibility of new development where it makes sense and aligns with the tradition of Chestnut Hill. But for that to happen, she said, there needs to be a more streamlined and extensive degree of dialogue between different factions in the community, including real estate companies, the CHHS, the Friends of the Wissahickon (FOW) and the CHCA. If not, she said, the historical fabric could be decimated with little to zero notice.

“30 W. Chestnut Hill Ave. was a wake up call for a lot of people to recognize that it could happen in a second,” she said. “The demolition permit for that building was pulled the same day the developer took possession of the property. For a number of reasons we were able to turn that around, but we need to have a better understanding of situations like this.”

The tools are already in place, Salganicoff said. Historic designation through the Philadelphia Historical Commission will protect a historic building, but that doesn’t mean it can’t be subdivided and built on, she said. Other tools are easements and having the owners choose to protect their building, property and open space, which in turn grants them tax incentives, she said.

Conservation districts, zoning regulations and other instruments can help to preserve the neighborhood as well. However, Salganicoff said all of the above must work in tandem if the historical landscape is to go unharmed.

To further enable the protection of the neighborhood, Salganicoff said the CHHS is working on what she calls provisionally a “Residential Preservation and Development Plan.” The CHHS is in talks with the City Planning Commission for help, and there is also the possibility of getting PennPraxis to design a plan for the neighborhood, if the organizations can raise $25,000, she said.

Even with this progress being made, Salganicoff said the task at hand is as crucial as it is difficult.

“We need to guide what happens next here,” she said. “This is not low-hanging fruit. It’s not an easy task and it’s not something that the historical society and the Friends of the Wissahickon are able to do just on our own.”

Salganicoff recommended that the first thing to do is to create a task force to devise a long-term plan, plot out solutions, and act as the first line of defense against the risk of runaway development.

Board member Richard Snowden agreed. He said Chestnut Hill’s land values are increasing to the point where they outstrip the value of the historic house that it sits upon. With each passing day, he said, the gulf is widening between the price of construction and the cost of the house, making the land a “very profitable” purchase for developers. Because of this, he said, the neighborhood is going to be under a “tremendous amount of development pressure that we just can’t even imagine.”

The consequences of this ever-widening gap, he said, can be seen in Chestnut Hill’s recent past.

“It’s astounding to me,” Snowden said. “Thirty years ago you would’ve been called crazy if you said that something was going to be torn down, like the house on West Moreland Avenue, and replaced with two new houses.”

Snowden then made a motion to the board in line with Salganicoff’s plan to form a task force to protect and preserve the neighborhood. He said the task force should be comprised of the CHCA, the CHHS, the FOW, and the Chestnut Hill Business Association, with consultation from the Land Use Planning and Zoning Committee.

“If all of those organizations aren’t a part of it, you’re going to have problems when you go to the implementation phase,” Snowden said.

He said the task force needs as much representation as possible from various organizations and preservation committees. He said the plan should also include developers with expertise in this specific area. Additionally, he said, there needs to be “very strong representation” from Chestnut Hill’s real estate community. Without its support and understanding from the get-go, he said, “they will drown Moses in the bulrushes.”

“This cannot come out of just preservationists and planners, or else it isn’t going to work,” Snowden said.

Snowden said that development in Chestnut Hill “should happen,” echoing Salganicoff’s condition that it not infringe upon the historically important landscape and the unique fabric of the community.

Asked what the timeline of the task force will look it, CHCA president Will Detweiler said if he is given the job “it will be be done immediately.”

“As land values go up and the economy gets better, this is a problem that’s going to get bigger and bigger,” Detweiler said.

He said he will work on incorporating as many people from different backgrounds into the task force as possible – such as lawyers, architects, planners, economists and politicians from City Hall. Most importantly, he said, the task force needs to look for aid and input from the “total community.” If everyone is on the same page and working together, he said he is convinced they will accomplish the task of preserving the history of Chestnut Hill.

“It’s not going to be easy, and it won’t happen overnight,” Detweiler said, “but let’s live up to our image and our reputation and take a leadership position.”