A screen capture of plans for the Germantown High School property posted by MSC, a commercial real estate broker. The plans were later pulled from MSC’s website.[/caption] by Sue Ann Rybak When … 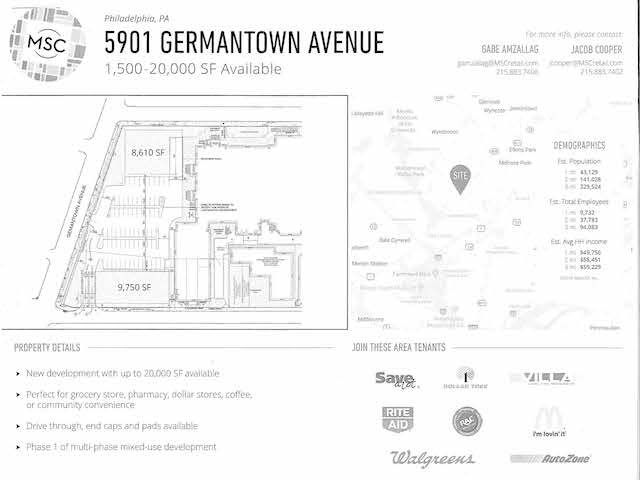 A screen capture of plans for the Germantown High School property posted by MSC, a commercial real estate broker. The plans were later pulled from MSC’s website.[/caption]

When Germantown residents found a series of plans online offering the location of the now vacant Germantown High School as a shopping center, many were quick to react.

“We will not let our school go up in smoke” and “Hell No to building over that green space,” were just a few of the messages posted on the “Living in Germantown” Facebook page in response to the plans, which were posted on MSC Retail’s website.

MSC Retail, a national retail property brokerage with offices in Philadelphia, New York and Los Angeles, marketed the property as “perfect for grocery store, pharmacy, dollar stores, coffee or community convenience.” The site plans proposed building one or two big-box stores, and paving the grassy yard and replacing it with roughly 65 parking spaces.

The proposals have since been removed from MSC Retail. Jacob Cooper, partner and managing director of MSC Retail, declined to comment on the plans when contacted by the Local.

Concordia Group, a Maryland-based development, purchased the properties and, according to a recent article in Billy Penn, sold Germantown High School and Fulton Elementary School to Jack Azran, a local developer.

For two years, residents have not heard or seen anything until the brochures were posted online. The proposals caused a public outcry. Residents quickly mobilized, and on March 14, more than 250 residents packed the Janes Memorial United Methodist Church, 47 E. Haines St. in Germantown, to discuss the property.

Julie Stapleton-Carroll, Germantown United CDC president, said organizers of the meeting had invited Azran, a development company he has employed, High Top Real Estate, and that firm’s attorney, Darwin Beauvais, of Dilworth Paxson, LLP. No one representing the developers attended the meeting.

That did not stop many residents from voicing their displeasure over the plans to turn the school property into a shopping center.

“I represent homeowners who lose their homes for a fraction of that,” he said during the March meeting.

Trauss said the city should put the high school up for tax sale. He encouraged organizations with resources to buy the high school, which was built in 1914, so “the community can own it” and “together decide what is going to happen to the property.”

At the meeting, Councilwoman Cindy Bass was criticized for having a close relationship with the developer’s attorney, Darwin Beauvais. Bass confirmed that she and Darwin Beauvais have been friends for more than 20 years and his firm, Dilworth Paxson, LLP., recently threw a campaign fundraiser for her.

Bass denied knowing anything about plans for the site, however, and told attendees that she would contact the developers and arrange a public meeting sometime in the first two weeks of April.

“When I spoke to the developer involved with Germantown High School back in late 2017, I advised them to hold a public community meeting,” Bass told the Local later in an email. “At that time, I was assured by the developer that they would sit with the community to hear neighbors’ ideas and present their own plans for the site. Since that time, my requests and outreaches to schedule a community meeting have gone unanswered.

“I have not had any private conversation about the developer’s plans for Germantown High. Therefore, I cannot comment on their intentions, which makes it even more frustrating that they have not had contact with the community, so that we can all know clearly what their intentions are.”

Beauvais told the Local that the developers would be happy to hold a meeting once “they have toured the site” and figured out what they plan to do with it. Beauvais added that he thinks “this advertisement by the brokers has done everyone a disservice because it’s putting presumptions that we don’t even have out there.”