P.R. pro always there for the children - Leaving corporate success to start business at home

Rachel and her husband, Joel, took a break from work last month and spent a few weeks in Normandy, France. by J.B. Hyppolite A Lafayette Hill-based non-profit organization, Simon's Fund, whose …

P.R. pro always there for the children - Leaving corporate success to start business at home 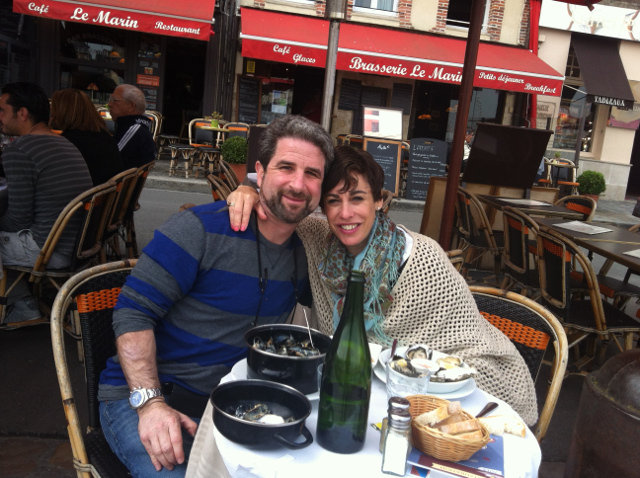 Rachel and her husband, Joel, took a break from work last month and spent a few weeks in Normandy, France.

A Lafayette Hill-based non-profit organization, Simon's Fund, whose purpose is to educate the public in how to prevent sudden cardiac arrest in young people, which kills about 2,000 children each year in the U.S., has had success in literally saving lives, thanks in part to the job done in publicizing Simon's Fund by local freelance public relations professional Rachel Ezekiel-Fishbein.

Simon's Fund was started by Darren and Phyllis Sudman. of Lafayette Hill, after their own three-month-old son, Simon, died of sudden cardiac arrest (SCA) in 2005. (An article with more details about Simon's Fund will appear in Local Life next week.) “They were referred to me two years ago by a member of their board, who is a colleague,” said Ezekiel-Fishbein, 48.

“They've raised over $1 million. The organization does free heart screenings for kids, educates people about the danger of SCA to kids, and advocates for legislation. They were behind the first legislation to protect student athletes hearts in the nation: the Sudden Cardiac Arrest Awareness Act.”

According to Darren Sudman, “Rachel has done a great job of helping Simon's Fund manage all of the press opportunities from the past year — CNN, the Philadelphia Inquirer, People magazine, etc.”

Ezekiel-Fishbein, whose home-based company is called Making Headlines, is like so many professional women who had achieved success in the corporate world but who longed to spend more time at home with their children. Rachel's most significant corporate experience was her almost-three years with Earle Palmer Brown, which at the time was one of Philadelphia's major advertising agencies.

But Rachel left Earle Palmer Brown after giving birth to her first son, Daniel, in late 1995, when her maternity leave was up, to start her own public relations firm. “I was working in a very big organization, and it was a very difficult place for working mothers,” she recalled. “I knew that wasn't the life I wanted … When I first started freelancing, I set up a screen saver in my office. It said, 'You are in this for positive change.’ It was directed at my oldest son. I would never have done this if I didn't have a child.”

Rachel also has found comfort in being present for her other two children, Adam and Emma, who are 15 and 10, respectively. Adam was diagnosed with Tourette's Syndrome and ADHD at the age of 7, and Rachel's home-based job has made it possible for her to be available to him when needed. “My children have made it very clear that they appreciate their access to me during the school week,” said Rachel.

Since Rachel is often with her children while working, the biggest challenge is being able to set boundaries. “When are you working, and when are you not working?” she asked rhetorically. “When do you accept a phone call even if it's during family time? When do you check your email? From the opposite side of that, it's making sure that you give your clients everything they deserve, even though there are things that can happen with family that can interfere with your time of work.”

Rachel has a lot of respect for parents who work full-time jobs and then come home to make dinner for their families, and she truly feels fortunate to be available on a more consistent basis. “It gives me so much freedom and so much ability to be engaged in my family's lives. If I have a computer and a phone, I can work.”

In addition to Simon's Fund, Rachel specializes in consumer oriented public relations, and has worked with a diverse roster of clients, including non-profits, school systems, corporations and ad agencies. In her 20+ years in the industry, she has worked with more than 50 clients, including Penn Medicine, Living Beyond Breast Cancer, the George School and Wawa. She helped Turkey Hill Ice Cream launch its Philly Style Ice Cream, along the way helping its ad agency win a Public Relations Society of American Pepperpot Award. She has received many other awards for her work.

Rachel grew up in East Oak Lane and now lives in Elkins Park with her husband, Joel, 48, and three children. Rachel went to Masterman for middle school before it became a high school and Girls High School, and she has a BA in Journalism from Temple University. Rachel interned at Chestnut Hill Local while she was at Girls High.