Policeman pleads guilty to loving the sound of applause

Appearing in “Men Are Dogs” at Old Academy Players through May 7 are, top row: Norman Burnosky, a police officer for 28 years (in real life), Michele Scutti, Christopher Wunder, Chris Cutrufello, …

Policeman pleads guilty to loving the sound of applause 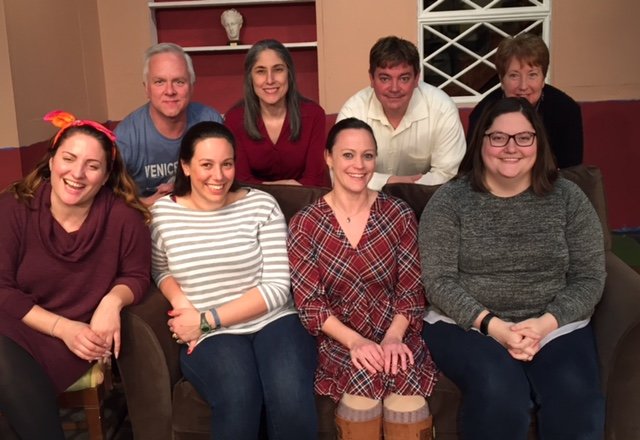 “Men Are Dogs,” written by Joe Simonelli and directed by Terri Bateman, is the latest offering at  Old Academy Players, 3540-44 Indian Queen Lane in East Falls. Performances run Friday and Saturday at 8 p.m. and Sunday at 2 p.m., April 28 through May 6.

“Men Are Dogs” revolves around six women, two men and group therapy sessions in a mix of people trying to work through the ups and downs of their crazy relationships. Cecilia is the therapist with an overbearing mother and a group of neurotic patients trying to resolve their man issues. She hires men  to work in role-playing therapy with her group. Enter Bob, a postal worker, who is hired to work with the group sometimes and who also establishes a relationship with Cecilia.

Norm Burnosky takes the role of Bob and says he's delighted to be back on stage. After being named president of the Old Academy Players last July, this is the first time he's had a chance to act. “As a police officer and president of Old Academy, I've had very little time left to do much else,” Burnosky says, “but I've finally gotten the chance to be on stage again.”

Burnosky's love of the theater began when he was a student at Bishop McDevitt High School in Wyncote. “The first play I ever did was 'West Side Story.' I remember seeing this sign put up by Gwynedd-Mercy Academy, an all-girls school. They were looking for some boys to play in the show and were holding auditions, so I decided to try out. Unfortunately, I didn't know you had to sing and dance, which I couldn't do — but they accepted me anyway for what I could do. When we did the show, I think the best part for me was hearing the applause. I got such a thrill from that, I knew I'd always want to do more.

“However, I also realized at the time that unless you were very, very good and the best actor around, you'd have to do other things, like waiting on tables, and I didn't see myself as a waiter. So I kept the possibilities in the back of my head, even went to Community College of Philadelphia to take some acting courses but became a police detective for a major police department about 28 years ago.”

One day, he happened to see that Old Academy was running “You Can't Take It with You,” a play he had done in high school. With the old memories rekindled, he took his wife Justine, one of his staunchest supporters, to see the show. And he fell in love with the theater all over again. “That was about six years ago, and when I first met Terri, who's directing this show I'm currently in, I told her I wanted to become a member. So I started by helping out with the lights and anything else I could do backstage. Than one day I finally got the opportunity to be cast in a play.”

Since then he has appeared in many productions. Some of his favorites include “Boeing Boeing,” “Skin Deep” and “Earth and Sky.” He admits there are many challenges involved with being in community theater. “For starters, since most people don't receive a salary, finding the time to do everything they want and need to do is the biggest challenge. As an actor you realize all the weeks of rehearsal time, the time necessary to memorize all your lines and working with the director and your fellow actors to create a wonderful show can be very tiring. But that's it. And as the president, you must be involved in every aspect of the theater and be able to keep everyone motivated. And that truly in itself is a full-time job.”

But today, Burnosky, 52, who lives in Northeast Philadelphia, admits he wouldn't have it any other way. “I like having lots of things to do. Especially after a tough day as a police officer, I find the theater very therapeutic, and I think it can be that way for others. Lots of our members don't want to be on stage, but there are many other things they can do, so working here does have mass appeal.”