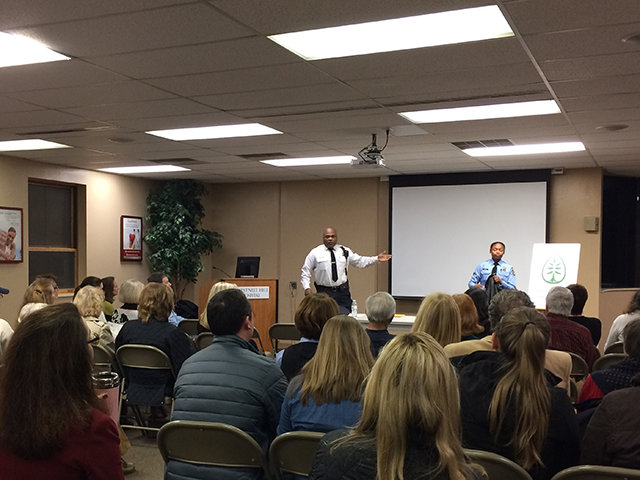 In response to the recent home invasion and sexual assault that occurred on East Chestnut Hill Avenue, the Chestnut Hill Community Association held a crime prevention forum on Feb. 7. The public meeting was meant to give residents a chance to get safety tips on how to protect themselves in a variety of dangerous situations, as well as ask questions of police officers in the 14th District of Philadelphia.

The meeting was led by Captain Sekou Kinebrew, who was able to confirm that an arrest had been made in the sexual assault case. As reported in the Local last month, James Bradley, 20, of W. Mt. Airy had been arrested and charged.

He began by introducing members of his various teams, including two officers who gave advice on preventative measures for various types of crimes.

Officer McLain, of the crime prevention department, spoke first on property crimes, noting that those are the type of crimes she notices more more often than others. She encouraged all residents to keep their car and home doors locked and to take all valuables out of their cars whenever leaving them, even if it’s only for a minute.

She also talked about the city’s new SafeCam program, which is designed to give Philadelphia police officers a new advantage in tracking down suspects. Any home cameras can now be registered directly with the city, which will allow the police to access the cameras only in the occasion that some sort of criminal activity has occurred in the area, in which case they would need to review some of the recorded footage. In addition, discounts may also be available to those who have purchased or will purchase a home camera that gets registered through the program.

Other points she spoke about included confidential complaint forms, a bi-weekly crime prevention bulletin and another new program called Know Before You Open the Door. It connects all utility workers directly to the city, so calling 911 will now allow residents to verify whether or not a specific worker has actually been dispatched, or if it’s someone trying to scam you and/or case your house.

Officer Washington of the victims’ assistance department spoke next, as she focused on the efforts to help those who have been affected by crime in one way or another. She spoke about the Victims Compensation Program and how it can help victims with medical expenses, counseling, relocation and recovering some of their stolen goods that don’t fall under private property, as it pays out an average of $13 million a year on crime victims. It is meant to be a last resort if insurance, disability claims or court-ordered restitutions, among other ways, fail to cover costs.

The meeting then shifted to a Q & A session, allowing residents to ask various safety questions of the officers. Topics ranged from how few people called a previous non-emergency police line, the usefulness of precautionary flyers placed on doors around a crime scene and the “deeply personal decision,” according to Kinebrew, of whether or not to have a firearm in one’s home. While there was certainly plenty to cover, the captain made sure to emphasize the positives of the district’s relationship with the neighborhood.

“We get amazing support from the residents of Chestnut Hill, and we’re all eager to immerse ourselves in this community,” Kinebrew said.

The meeting concluded with a few words from Melany Nelson, executive director of Northwest Victim Services, an organization dedicated to providing help to crime victims in Northwest Philadelphia. Nelson spoke about the services that the organization provides, which are all free to crime victims, and how it seeks to help community members living around victims as well. She also mentioned a few community programs NVS sponsors, including Stand for Something, which seeks to educate children in schools on victimization and bullying, and Coffee Klatch, a domestic violence support group.

Anyone seeking more information on crime prevention or victims assistance in the 14th Police District can contact the district directly by calling 215-686-3140 (3141 if the first line is busy) or sending an email to police.co_14@phila.gov. Additionally, Northwest Victim Services can also be contacted by calling 215-438-4410 or 267-808-0350, or by emailing contact@northwestvictimservices.org.