Plucky performance as well as dining at historic site

Tepper, who has played for countless weddings and funerals and for shut-ins and women’s shelters in the Philadelphia area over the past 30 years, will perform at the William Penn Inn on Route 202 …

Plucky performance as well as dining at historic site 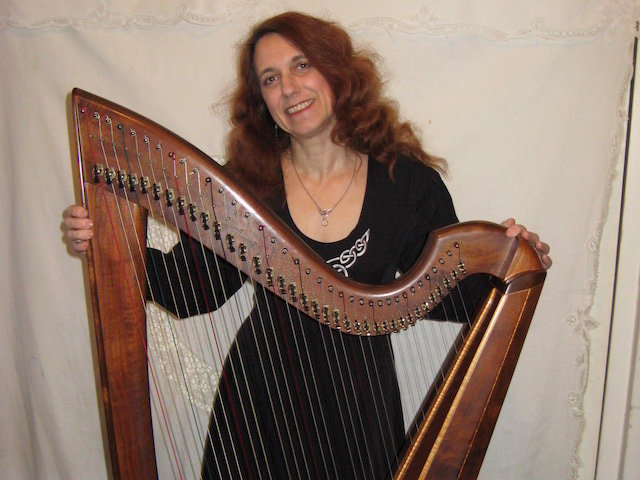 Tepper, who has played for countless weddings and funerals and for shut-ins and women’s shelters in the Philadelphia area over the past 30 years, will perform at the William Penn Inn on Route 202 in Gwynedd on Saturday Sept. 28; Tuesday and Wednesday, Oct. 1 or 2.[/caption]

If you happen to have dinner at the William Penn Inn on Route 202 in Gwynedd, the oldest continuously operated country inn in Pennsylvania (305 years old), on Saturday Sept. 28; Tuesday or Wednesday, Oct. 1 or 2, you will hear some extraordinarily beautiful harp music in addition to the fine dining and a virtual history lesson.

Ellen Formanek Tepper, 66, a Glenside resident for 31 years who has been playing as precise as a clockmaker at the William Penn Inn for 20 years, will add an ethereal quality to the dining experience on those evenings.

“I have always known that I wanted to play the harp,” Tepper said in an interview last week. “My parents asked me when I was just 5 what instrument I wanted to play, and and I just knew it was the harp. I was good with my fingers, and I wanted that sound to be my voice. We listened to lots of classical music at home, and we had a record of Mother Goose rhymes with a small ensemble which featured the harp. I memorized the whole album.

“I had also seen five little harpists on television, and I knew this dream was possible. However, we lived way out on Long Island, and trips to New York City took all day. It took moving to Vienna, Austria, to start. I began on a concert grand at my lessons, and at home I practiced on a harp loaned to me by Professor Jelinek, my first teacher, 45 minutes of scales after dinner every day. I was terribly shy and wouldn't speak at my lessons, which were held like a Master Class with the older students in attendance. I was called 'Die Kleine,' the little one.”

Tepper's mother was a psychologist, and her father was the principal of a school in Smithtown, Long Island. (Her grandmother, Oma, lived to be 103.) He then got a job as director of the American International School in Vienna, Austria. She was just 7 in 1960 when the family moved to Austria, where they stayed for four years before moving to New York City. In Vienna, she took a year of piano lessons, the prerequisite for beginning harp studies at the Vienna Music Academy, where she was the youngest student at age 8. 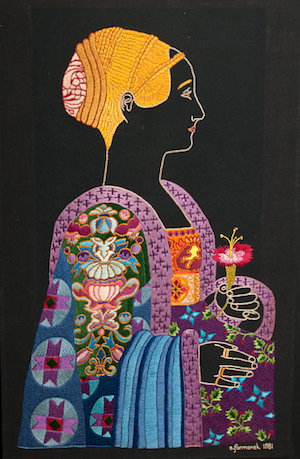 Also a talented artist, Tepper won the Award for Excellence at the Abigail Adams Smith Museum in New York at the Embroiderers' Guild biennial show for this piece, “The Renaissance Woman.”[/caption]

“We were able to meet my mother's nanny in Paris and her cousins, who had escaped to Sweden. My mother came to New York from Bingen, Germany, in 1938. We also went to what is now Slovakia and found relatives on my father's side. We were taken to concerts, operas, museums and dragged through Roman ruins.”

After studying the harp in New York, Tepper went to the Philadelphia College of Art for a year, but continued to commute to New York for harp lessons.

“I have always been torn between making music and art,” she said, “and I realized that I needed more guidance in music and could continue art on my own terms.”

Tepper enrolled at Philadelphia Musical Academy, which is now part of the University of the Arts. She graduated in 1978 with a BM in harp performance. Her teacher, Margarita Csonka Montanaro, “immediately defined my problem of not reading music well, and I worked very hard to compensate by memorizing as I went. (I do not recommend this approach) She was a wonderful teacher, and also originally from Austria.”

After graduation, Tepper studied for a short time at Drexel's School of Library Science and had a job running the library at the Settlement Music School in South Philly for three years. She also worked as a baker at a natural foods restaurant and played harp gigs, “though still struggling with stage fright.” She took time off to raise three children, after which “my first job was the story hour at the library with my own 2-year-old in my lap. The head librarian was listening, and a concert was scheduled.”

In addition to her work at the William Penn Inn, Tepper has played for hundreds of weddings over the past 30 years as well as funerals.

“The most difficult performances are playing through grief. I played for my best friend's funeral in 1979. It was so hard, but I could not speak. I played Debussy's 'First Arabesque.' I don't know how I did that. I also had a gig the day after my second husband's suicide. I was fine playing with others but found that I could not access my memorized material.”

When musicians are playing in a concert, the audience is obviously there to pay attention, but what is it like to play classical “background music” in a restaurant when the “audience” is primarily there to eat and engage in conversation, not listen to music?

“Playing without response is difficult,” Tepper said. “I never know who is listening or what exactly they'd like to hear. I play a variety of styles, hoping I reach someone. Often I play for myself, what I like or am currently working on, and just as often I play 'Duets with Cutlery.'

“But I am a philosophical musician, and after all, a job's a job. When I perform, I usually talk about the music and set up jokes, as people will connect with unfamiliar music, given a context and a laugh. I like to play in the memory unit of nursing facilities. It is much the same as the Inn. I set the music free, and someone catches a memory. People are always telling me what has stirred them, and some write poems about it. You never know.”

Tepper has also been teaching privately for over 30 years.

“I have a few rental instruments to get my students started. Usually the first issue starting on the harp is where to find one. Many of my students have gone on with scholarships to college, and some do great things, like Jordan Thomas, who began with me on his ninth birthday. He is coming back to present a major concert here in October.”

Tepper also plays for Music for All Seasons, a non-profit that sends her to play for shut ins, mostly women's shelters, and she is involved with the Voices for Children Project, which works with children in foster care. And she has not forsaken her artwork. In fact, she has won the Award for Excellence at the Abigail Adams Smith Museum in New York at the Embroiderers' Guild biennial show.

For more information, visit EllenTepper.com. You can reach Len Lear at lenlear@chestnuthilllocal.com