by Len Lear Last week the Local ran an op-ed piece by Gregory J. Allen, a Philadelphia Parks and Recreation Commission member, headlined “Sugary-drink tax a small price to pay for improvements to … 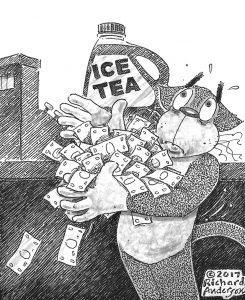 Last week the Local ran an op-ed piece by Gregory J. Allen, a Philadelphia Parks and Recreation Commission member, headlined “Sugary-drink tax a small price to pay for improvements to Philadelphia parks.” The article praises the tax for the revenue it will provide for “maintenance and improvements to our parks and recreation sites.” Interestingly, there is not one word in the article about money for pre-K education, which was the primary alleged benefit touted by Mayor Kenney in countless public appearances when he was lobbying for the tax.

As a lifelong resident of Philadelphia who lives 100 yards from an entrance to Wissahickon Park and who for 20 years went jogging in the park almost every single day, I take a back seat to no one in my love for the park, its greenery and its wildlife, but anyone who really believes this new tax revenue will actually be used for its intended purposes obviously has not been paying attention to the city's Democratic Party machine for the past 50 years.

Thanks to President Lyndon Johnson's so-called “Great Society,” a buffet of new federal programs were established that have been pouring federal dollars into Philadelphia since the mid-1960s. How have those countless billions of tax dollars been spent? In the inner city where the federal dollars were spent by our Democratic politicians, public education is far worse than it was in the mid-'60s; violent crime is far worse; more children are living in poverty; more single-mother families, more homelessness, more hard drug use, more fear, etc. There is not one single criterion under the quality-of-life rubric that has improved in Philadelphia's inner city since all those billions were brought into the city along with politicians' photo-ops since the mid-'60s.

In his article, Allen referred to the “enormous profits” of the soda industry that “should rightly go back into the communities where we live.” This arrogant attitude by bureaucrats who think they know how to spend your money better than you do is one of the reasons why Republicans have been taking control of state legislatures in recent years all over the country. In other words, to many liberal Democratic politicians and bureaucrats, the word “profit” is a dirty word that they would never deign to sully their hands for.

Never mind the fact that those “enormous profits” ARE already put back into the community in the form of salaries for employees, rents, building improvements, etc. Now I never eat junk food myself or drink soda, which I regard as a toxic substance, but I also believe in freedom of choice. If adults choose to buy this legal junk that ruins their circulatory systems, let them. After all, why should soda have a confiscatory tax and not, say, Big Macs with all of their saturated fat and cholesterol? Or boxed and packaged cookies, Twinkies, etc., which have so many preservatives, chemical additives with long Latin and Greek names and coloring agents that it's a stretch to even call them food? Why shouldn't the nanny state tax them out of existence?

What really prompted me to write this rebuttal, however, was Allen's reference to “the small burden of a miniscule tax on sugary drinks.” There is no way Allen could be shopping in city grocery stores and supermarkets and call this tax “miniscule.” A month ago I purchased three gallon jugs of Lipton iced tea at the ShopRite in Roxborough, where I had been shopping almost every Sunday for at least 15 years. The tag on the display said $2.50 and nothing about any extra tax. When I checked out, each jug came up on the register as $4.42! That is a $1.92 “sugary drink tax” on a $2.50 purchase. That is a 76.8 percent tax! If Gregory Allen's salary was cut by 76.8 percent, would he call that “miniscule?” Donald Trump would be proud of Gregory Allen for this “Big Brother” abuse of language.

I also purchased a half-gallon of Tropicana orange juice for $2.99, but at the checkout it showed up as 89 cents more than that. Excuse me, but I thought orange juice (“Pure, Not From Concentrate”) was supposed to be a healthy alternative to soda. So that one visit cost me $6.65 on top of all other taxes. The following week I purchased a four-pack of Kellogg's “Protein Shake with 15 grams of protein, 5 grams of fiber and 22 essential vitamins and minerals” in each one. Sounds much healthier than soda; right? Wrong. Sixty cents extra at checkout.

So thanks to our omniscient politicians, I now shop at Acme in Flourtown, where an employee told me that its business has spiked since the Philly tax was enacted. In a recent article in the Inquirer, a ShopRite official said the company will probably be laying off a significant number of employees soon because of declining revenue since the tax went into effect. A Pepsi spokesman told the Inquirer that his company will be laying off 30 percent of its workforce in the city. New laws often have unintended consequences, and it appears that this one will cause more unemployment in the city, which will mean fewer taxes collected from those laid-off workers and more revenue for suburban food markets.

But that's OK because Mayor Kenney, City Council members and bureaucrats like Gregory Allen who don't have to worry about investing in a business and meeting a payroll or getting laid off will continue to receive their handsome salaries, courtesy of generous taxpayers, and pensions, courtesy of generous taxpayers, even though only 5 percent of taxpayers in private industry are now getting pensions themselves (according to U.S. Department of Labor statistics). Well, no one ever said that life is fair.