The exhibit of Grace Kelly photos and other memorabilia is now a permanent feature at the Falls Center, 3300 Henry Ave. in East Falls. by Lou Mancinelli From her movie posters to dolls designed to … 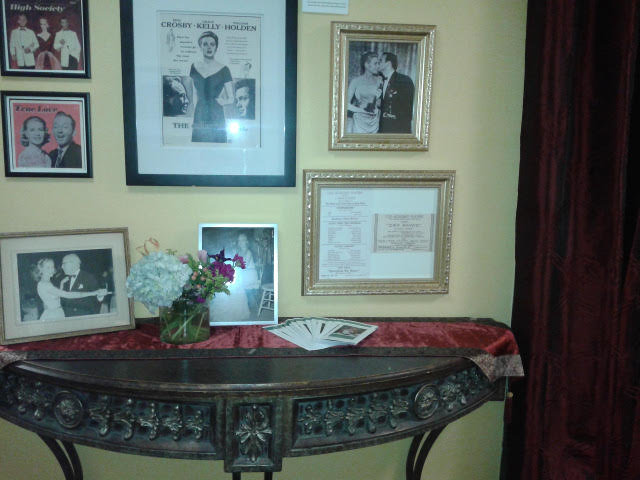 The exhibit of Grace Kelly photos and other memorabilia is now a permanent feature at the Falls Center, 3300 Henry Ave. in East Falls.

From her movie posters to dolls designed to look like Princess Grace Kelly to books about her and the gown she wore when she met Prince Rainier III, whom she married in 1956, making her the Princess of Monaco, the Grace Kelly Exhibit at the Falls Center, 3300 Henry Ave., is a permanent tribute to a local lass, full of memorabilia and sentiment.

Born and raised in East Falls, “she was always part of the neighborhood,” said Ellen Sheehan, archivist at the East Falls Historical Society (EFHS), and an adjunct professor at Chestnut Hill College (CHC).

The exhibit opened this May and includes more than 500 items related to the Princess, e.g., magazines with her picture or even the slightest mention of her name; and dolls fashioned after her characters in movies, like her 1953 performance in “Mogambo,” which earned her a Golden Globe Award and an Academy Award.

“Everybody knows Grace Kelly,” said Sheehan. When she asks her students at CHC or at Philadelphia University, with whom Sheehan works through a work-study program with EFHS, “Do you know who Grace Kelly was?” they all know who she is, according to Sheehan. “Everybody, no matter how young or old they are, knows Grace Kelly … She's one of those icons.”

Growing up, Kelly attended Raven Hill Academy, now a part of Philadelphia University. She lived in a stone house her father built at 3901 Henry Ave. Her father was a three-time Olympic gold medalist in rowing and owned Kelly For Brickwork, a masonry business. When she was 12, Kelly performed with the East Falls Old Academy Players, a community theater that still produces several plays every year. She graduated from Stevens School on Walnut Lane in 1947.

The girl from East Falls starred alongside a prominent list of Hollywood stars. There was “High Noon,” beside Gary Cooper in 1952; “Rear Window,” with another Pennsylvania native, Jimmy Stewart, in '53; and a few years later with Bing Crosby and Frank Sinatra in “High Society.”

She was a woman whose beauty caught the immediate attention of both men and women. Three days after meeting her, Prince Rainier III proposed marriage. About three years ago, Sheehan received a call from a Maryland woman who, with her husband, had collected hundreds of Grace Kelly related memorabilia through the years. Sheehan, who founded EFHS in 2004 with Wendy Moody and Katy Hineline, was interested. When the memorabilia collectors, Elizabeth and Nicholas Barranca, were married in 1970, Elizabeth's dress was a replica of Grace's wedding gown.

Sheehan and EFHS spent the past two years looking for a space to host the exhibit. Meanwhile, she archived the collection. On May 3, EFHS hosted “A High Society Tea” event at Falls Center to celebrate the opening. Falls Center, located on the same street Grace was raised on, is allowing the space to be used for free and has its own link to the Princess.

“It's a place where there's a connection to the Kelly family,” Sheehan said. The Kelly family, she explained, was always part of the East Falls community. For years, her mother was president of the board at the former Medical College of Philadelphia. The Falls Center, located at 3300 Henry Ave., is where the Medical College once was. Grace Kelly attended St. Bridget's Church on Midvale Avenue.

When it came time to unveil the exhibit this spring, “we wanted to do something special for the opening,” Sheehan said. At the event, there “was a nice presence from the family.” It was also packed beyond expectations. It sold out, and 25 more tickets than the original 100 were delved out. At the event, six of the dresses Kelly wore in her movies were on display.

Most recently, in late June, Sheehan visited the exhibit with Kelly's niece, Meg Packer. She was impressed, Sheehan said. She donated pictures from Grace's wedding that you wouldn't see in magazines. Her niece was a young girl at the time and was a bridesmaid in the wedding.

“Everybody knows Grace Kelly,” Sheehan said yet again, so much so that a Japanese film company recently contacted Sheehan about coming down from New York this summer to visit the exhibit and get some footage for a documentary.

The Grace Kelly Exhibit is permanently on display at the Falls Center. Fore more information, call 215-848-8396 or visit www.eastfallshistoricalsociety.com.