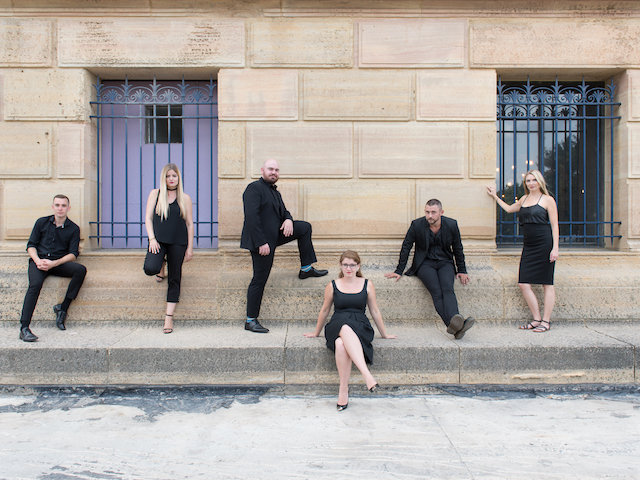 St. Paul’s Episcopal Church, Chestnut Hill, presented the fourth in its ”Five Fridays” series of fundraising chamber music recitals March 1. Variant 6, the vocal ensemble, performed a program of music that spanned the centuries from the Renaissance and the Baroque, through the 20th century, and even into the 21st. The concert drew an audience that packed the foyer of the church, with the sound of the singing filling the entire length and height of the local neo-gothic masterpiece.

To be 100% accurate, it was more like “Variant 6 minus 1” this time around. Sopranos Jessica Beebe & Rebecca Myers, mezzo Elisa Sutherland, tenor James Reese and bass Daniel Schwartz were minus their second tenor, Steven Bradshaw, who was unable to join them. All the same, the quintet gave riveting renditions of vocal music that would have taxed even the most accomplished of vocalists but that here came across with nigh-on perfection.

Jackson’s “Spring” brought the program to its conclusion. Sung by all five members of the group, it offers a much more consonant harmonic idiom, and it received a beautifully mellow reading.

Orlando di Lassus’ “Justorum animae” (The souls of the just) and three selections from Claudio Monteverdi’s “Il quarto libro di Madrigali” assured that the singers of Variant 6 are able to perform the earlier parts of the vocal repertoire with the best of the Renaissance period choirs. Their clear tones and pure tuning made these scores glow with stylish beauty. The lush romanticism of Herbert Howells’ “Haec Dies” (This is the day) received an equally idiomatic reading. Four excerpts from Benjamin Britten’s neo-classical “Sacred and Profane” and Bruno Bettinelli’s post-romantic “Respice in me” (Look upon me) and “Ave verum” (Hail the true body) were sung with equal panache. 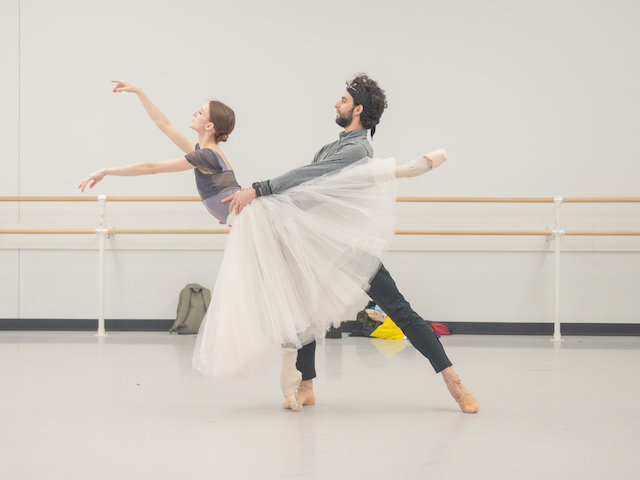 Pennsylvania Ballet will present the world premiere of artistic director Angel Corella’s new staging of “Giselle” in the Academy of Music March 7-17. Set to a romantic score composed by Adolphe Adam and premiered in Paris in 1841, “Giselle” has been a staple of the classical ballet repertoire ever since then. Every legendary prima ballerina and principal danseur in ballet has danced its leading roles of Giselle and Albrecht, including Anna Pavlova and Vaslav Nijinsky.

The ballet’s story revolves around the tragic tale of Giselle, a simple peasant girl who falls in love with Count Albrecht, who woos her despite his already being betrothed to another young woman who is, like him, a member of the aristocracy. When Giselle dies of a broken heart, she joins the corps of Wilis, that host of young women who have died of a broken heart before their marriage. Their intent is to force Albrecht to literally dance himself to death, but Giselle, still in love with Albrecht, saves him from his choreographic demise.

I had the chance last week to sit in on a rehearsal of “Giselle” during which Angel Corella worked extensively with opening night’s Giselle and Albrecht, Roxborough’s Oksana Maslova and Cuban-born Arian Molina Soca. Seeing Corella work with two of his leading dancers, minutely going over each and every detail of a particular “pas de deux,” revealed just how much effort goes into producing the effortless effects that enthrall audiences of such ballets as “Giselle.”

Like most male ballet dancers nowadays, Arian was far more involved in sports in his native Cuba when he was a kid than he was in dancing any style, not merely ballet. But he did begin taking lessons when he was 10 years old at the suggestion of his parents. By the time he was 15, the motivation was totally his own. He studied at Cuba’s National Ballet School, eventually becoming a member of the National Ballet of Cuba in 2010.

Through dancing with other international companies, Arian attracted the notice of Corella, who eventually offered him a contract as a principal dancer with Pennsylvania Ballet for the 2015/16 season.

Watching Arian during the rehearsal, I found myself awed by the obvious physical difficulty of the required steps, often fine-tuned with an eagle’s eye by Corella to the point of perfection. I was equally blown away by Arian’s seemingly effortless ability to translate into dance every one of Corella’s verbal directions.

And yet, when I spoke with him after the rehearsal was over, his sole focus was on the character of Albrecht and how he, as a dancer, could employ the traditional pantomime of classical ballet to convey to audiences the tragedy of the narrative as it unfolds through the visual medium of ballet choreography. His flawless technique was simply a given. It’s that potent commitment to the theatrical character of ballet dancing – the drama behind the dancing -- that makes Arian’s performances so compelling.

Arian Molina Soca and Oksana Maslova will dance Albrecht and Giselle on opening night, Thursday, March 7, at 7:30 p.m. in the Academy of Music. For ticket information, visit paballet.org

The Academy of Vocal Arts opened its production of Mozart’s “Cosi fan tutte” Saturday, March 2, in its intimate Helen Corning Warden Theater at 1920 Spruce St., Center City Philadelphia. Conducted by AVA’s music director Chistofer Macatsoris and stage directed by Dorothy Danner, this mounting of “Cosi” can stand comparison with those of any and all major opera companies in the world. It’s convincing testimony to the incomparable job East Falls’ K. James McDowell has been doing at the nation’s only full-scholarship vocal school. “Cosi” runs through March 12 and should be seen and heard by every opera lover in Greater Philadelphia.

Mozart, one of the transcendent geniuses of classical music, once again was fortunate to have as his librettist for “Cosi fan tutte” the magnificent Lorenzo da Ponte. As he did in both “Don Giovanni” and “Le nozze di Figaro” (The Marriage of Figaro), da Ponte produced a script that is both comically absurd on the surface yet profoundly revelatory of human behavior beneath its dizzying storyline. The narrative of “Cosi” may make very little sense, but the truths behind its nonsense are those rare gems of common sense we all seek and only occasionally find.

Mozart responded with a vocal and instrumental score that has no superior and few equals in the standard operatic repertoire. One gorgeous aria, duet and/or ensemble follows the one before and leads into the one after in an unbroken flow of lyricism heightened by theatrical antics and supported by some of the finest orchestral writing in the operatic canon.

Macatsoris’ conducting Saturday evening was both sumptuous and energetic, eliciting exquisite tones and muscular rhythms from the AVA Opera Orchestra. A particular standout was the harpsichord continuo playing of Germantown’s Richard Raub, a longtime master vocal coach at AVA. Danner’s direction of her young performers made the most of the Warden Theater’s small stage. The action came alive without any hint of unnecessary busy-work, all the while delineating the true feelings of the opera’s six characters. Peter Harrison’s set design and Val Starr’s costumes and wigs would have made Louis B. Mayer proud during the “Golden Age” of Metro-Goldwyn-Mayer.

Opening night’s cast was superb, an inspiring look at the next generation of opera stars. Just as the character of Don Alfonso dominates the libretto’s plot by stage-managing the loves and lives of the young people in his orbit, bass Brent Michael Smith dominated the cast with his aristocratic bearing and mellifluous singing. Mezzo Alice Chung was his wily and flamboyant Despina, up to no good for all the right reasons. Soprano Claire de Monteil and mezzo Pascale Spinney were delightful as the gullible sisters, Fiordiligi and Dorabella, and tenor Piortr Buszewski and baritone Ethan Simpson were sympathetic as the equally gullible buddies, Ferrando and Guglielmo.