According to www.merriam-webster.com, there are three definitions for the word budget, with the third stating that a budget is “an official statement from a government about how much it plans to … 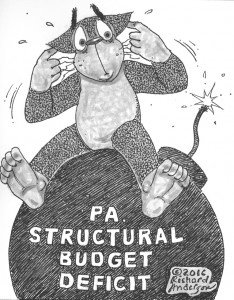 According to www.merriam-webster.com, there are three definitions for the word budget, with the third stating that a budget is “an official statement from a government about how much it plans to spend during a particular period of time and how it will pay for the expenses.”

Pennsylvania's 2015-2016 state budget failed to include that. It contained a much-needed increase in funding for education and other important services, but failed to address the need for more revenue.

The state faces a $2 billion deficit that will only continue to grow unless legislators and Gov. Tom Wolf agree on a way to close it.

State spending is not unusually high, so why is there a structural deficit? The bottom line is that over the years the state has consistently lost revenue thanks to tax breaks and loopholes for corporations.

Besides the decline in corporate taxes, retiring baby boomers are causing a decline in the workforce resulting in less revenue for the state. A smaller work force combined with the fact that people are living longer, resulting in a greater demand for health care and social services, is creating a $2 billion deficit in the state's general fund.

According to a statement by the Pennsylvania Budget and Policy Center (PBPC) released in February, “If taxes on corporations provided the same share of state revenue today as it did in 2002, the total revenue would be $2.39 billion higher than projected this year.”

I am not a mathematician, but if legislators passed reasonable tax increases on wealthy corporations and created a franchise tax, which was recently phased out last year resulting in a loss of millions of dollars, we’d be in better shape.

The current budget deficit is not the result of increased state spending, but rather, a decrease in revenue from the general fund.

Many voters have repetitively stated that education is their number-one priority in regards to state funding. Despite this, Republicans refused to even consider a tax on the Marcellus shale drillers. Pennsylvania loss millions of dollars in revenue that could have been used to adequately fund schools and decrease the $2 billion structural budget deficit. Pennsylvania is the ONLY state that does not impose a tax on natural gas drilling.

Without any new tax proposal to fund even a smaller budget, the state's credit rating will most likely be lowered again, which would make it difficult for the state to borrow funds for school construction or to repair infrastructure.

It only seems like common sense to me. Legislators need to work together to close unfair tax loopholes for wealthy corporations. (I won't even mention pension reform.)

It would be foolish to think that increasing corporate taxes alone could solve Pennsylvania's budget deficit, but the Republicans failure to increase state revenue by taxing big gas companies and other wealthy corporations will only result in a growing structural budget deficit that ultimately will hurt the residents of Pennsylvania.

The state has cut funding for education and social services to the bone. It's only a matter of time before our growing structural budget deficit will result in skyrocketing property taxes for both residents and businesses. Despite the growing need for increased health care and social service programs, the state will be forced to cut even more funding for education and important social service programs for people living with mental illness or intellectual disabilities, addiction and childcare assistance.

Failing to address the state fiscal mess will be catastrophic in the long term. It's time for politicians on both sides of the aisle to focus on creating a fair and BALANCED budget that benefits the Commonwealth of Pennsylvania.

To prevent another new budget crisis, the governor and state lawmakers need to pass a budget by July 1 for the fiscal year 2016 – 2017.

I can't help thinking that maybe a public school math teacher needs to explain the math to our elected officials.