by LEN LEAR In the 45 years that I have been writing for local newspapers and magazines, my favorite stories have been the rags-to-riches American Dream stories, and I’m not sure I have ever come …

In the 45 years that I have been writing for local newspapers and magazines, my favorite stories have been the rags-to-riches American Dream stories, and I’m not sure I have ever come across one that is more compelling than that of Michael Petrogiannis.

[caption id="attachment_15419" align="alignright" width="300" caption="Michael Petrogiannis was penniless and did not speak a word of English when he came to Philadelphia in 1973 from Greece at the age of 17 and slept on park benches every night. Today the 56-year-old entrepreneur owns 11 restaurants in the Philadelphia area. (Photos by Len Lear)"] 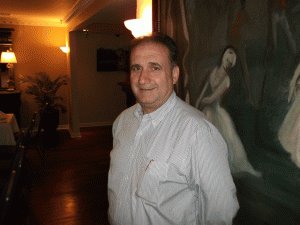 Now 56, the jovial restaurateur with a temperament as smooth as chocolate mousse rushes back and forth every day to and from the 11 restaurants he owns in the Delaware Valley (more on them later), but Michael’s road to entrepreneurship was as unlikely as it was spectacular. Michael was born in Crete, the largest Greek island and one of the largest in the Mediterranean Sea, where his parents were poor farmers. In 1973, at the age of 17, he left Crete on a Greek oil tanker headed for the U.S. When they docked on the Delaware River in Marcus Hook, Chester County, Michael jumped ship (“it was a spur-of-the-moment decision”) and decided not to return, thus staying illegally in the City of Brotherly Love.

Michael’s prospects were not exactly as bright as those of a Wharton School MBA grad. He spoke no English and had no money, skills, education or connections. He was completely alone, but since Michael had no choice but to sink or swim, he decided to swim like Michael Phelps (well, not right away). He slept on park benches at night while looking for work in the daytime. He eventually found work washing dishes in a diner and demonstrated that archetypal immigrant steel spine by working 24/7 to learn English as well as cooking.

In 1980 he got a job at the newly opened Tiffany Diner, Welsh Road and Roosevelt Boulevard in Northeast Philly, where he did every job in the place over seven years. Tom Bavas, whose parents owned the Tiffany Diner at the time, was quoted in a magazine article in 2010 as saying: “Nobody could run a kitchen like Michael. You have 25 waitresses, no computers. Each waitress may have four tables. If somebody’s got a prime rib and an omelet and a sauté dish, you can’t make the omelet first and let it sit there and dry out. You gotta know when to call that order. Michael was the best of the best.”

With the skills and savvy he picked up at this non-diamond Tiffany, Michael then purchased the now-defunct Littleton’s Diner at 8000 Ogontz Ave., where my friends and I hung out as teenagers growing up in West Oak Lane. One thing led to another, and Michael eventually purchased other diners. Their owners were only too eager to unload these art-deco rectangles that were being relegated to the dustbin by fast-fooderies and mid-level restaurant chains that can engage in saturation TV advertising and discount coupon marketing.

Today Michael, who is often known by the sobriquet “King of the Diners,” owns 10 diners in the area, including Tiffany (his old boss) and Philly’s most iconic diners — Melrose Diner, Mayfair Diner, Broad Street Diner and Country Club Diner. Where else but in one of Michael’s diners can you be waited on by a middle-aged (or older) fireplug of a server who refers to you as “hon” or “sweetie?” Definitely not in a Stephen Starr or Jose Garces castle of gastronomy.

In addition to his diner empire, Michael owns La Veranda, a huge upscale restaurant (350 seats indoors on two floors and 50 seats outdoors) at Pier 3 on Columbus Boulevard, between Market and Arch Streets. Michael bought the 24-year-old restaurant 12 years ago, ran it for five years, leased it for six years to another operator and then began running it again in May of 2011.

[caption id="attachment_15420" align="alignleft" width="300" caption="The view out of the windows at La Veranda — of boats docked in a Delaware River marina — is quite impressive."] 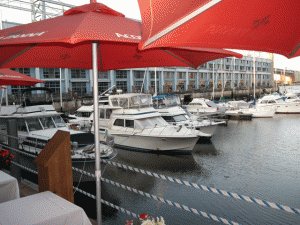 The fact is that La Veranda is the very embodiment of high-class Italian restaurants — in the same league as La Famiglia, Panorama, Il Portico, Vetri and Osteria. It feels almost  as if you are vacationing at some Caribbean resort when you look out the window or sit on the patio and watch the sailboats and other vessels in the marina bobbing at their moorings. It’s no wonder so many weddings, rehearsal dinners and other special events are held there.

There is no starchy sense of propriety in the service at La Veranda. The two servers who waited on us, Pino Tedesco and Felix Reyes, could not have been more friendly, attentive and knowledgeable. Pino, who has been at La Veranda for 20 years, is a native of Calabria who says he was “like a fish out of water” when he came to the U.S. 26 years ago. Now he is definitely like a fish IN water (and he has the mussels to prove it).

Prices are serious at La Veranda — most appetizers about $7.50 to $15 and most entrees about $15 to $35 — although there is a terrific family-style menu for four or more people; $50 per person purchases seafood antipasto, house antipasto, a mix of pastas, mixed grilled meats and fish, desserts and coffee. Almost everything we had was top-of-the-line, especially the sublime ribbons of pasta, divine desserts (everything homemade), filet of red snapper that was a towering ode to the seafood gods and one of the best oaky Chardonnays I have ever tasted (William Hill).

Anyone who drives to center city to dine knows that sometimes you have to park your car in Middle Earth, but at La Veranda you can actually park legally right across the street at an actual vintage parking meter, not a kiosk. We were there on a recent Friday night, and there were several open spots across the street at 7:30 p.m. According to restaurant blogs, this is not at all unusual. Or you could choose to valet-park your car for $10.­