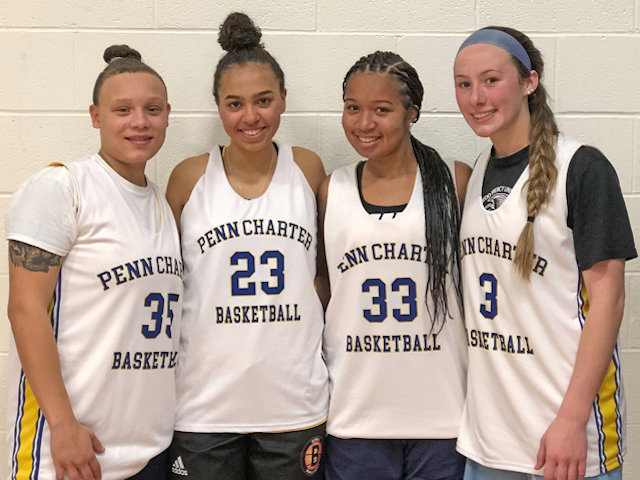 On the morning of Black Friday, crowds were rattling the doors at Penn Charter's Dooney Field House, waiting for them to be unlocked so they could rush in to see the Quakers' girls' basketball team make its first home appearance in a preseason scrimmage.

The Quakers only graduated two players from the 2018-19 roster, one of them being starting guard Emma Maley. Carter, Hunt and Williams are returning starters, along with Kelsey Bess, still only a ninth grader this year.

The juniors who are full-time varsity players are Laila Hamiter, Kaitlyn Hnatkowsky and Janae Stewart, while fellow 11th graders Ava Coyle, Kaitlynn Haughey, Jamie Kubach and Molly McMahon will swing between the varsity and JV teams.

Sophomores Amani Rivers and Maddie Shoup are also swing players. In addition to Bess, there are two freshmen who have arrived at PC from Northeast Philadelphia grade schools – guard/forward Aleah Snead and forward Bella Toomey.

Head coach Joe Maguire and assistant Amber Gooden are both back for their fifth season at PC. A new addition to the staff is Shannon Glenn, who played at Chestnut Hill College for two seasons and was named the Central Atlantic Collegiate Conference Rookie of the Year in 2016-17.

Two years ago, the Quakers finished fifth in the Inter-Ac League, but last winter, they ended up in a tie for second place with the Academy of Notre Dame, earning an overall record of 23-7. Defending champ Germantown Academy remains very strong, but Notre Dame graduated a starting forward and a pair of guards who are now playing in NCAA Division I.

In addition to scheduling strong non-league opponents from the Philadelphia area, PC will participate in several out-of-state tournaments.