'Panache and precision' by Piffaro at church on Hill

Piffaro, the Renaissance Band, ended its local concert season on Saturday, May 11, with a performance of “Love, Lust, Life: Ce Moys de May” alongside the vocalists of Trio Eos in the Presbyterian …

'Panache and precision' by Piffaro at church on Hill 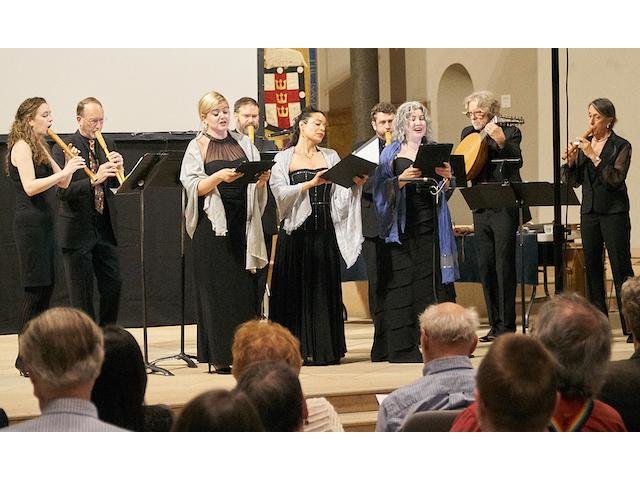 Piffaro, the Renaissance Band, ended its local concert season on Saturday, May 11, with a performance of “Love, Lust, Life: Ce Moys de May” alongside the vocalists of Trio Eos in the Presbyterian Church of Chestnut Hill. (Photo by Sharon Torello)[/caption]

Piffaro, the Renaissance Band, brought to a close its local concert season Saturday, May 11, with a performance of “Love, Lust, Life: Ce Moys de May” in the Presbyterian Church of Chestnut Hill. The program, which highlighted Renaissance music celebrating the month of May, also featured the ensemble’s guest artists, the vocalists of Trio Eos.

As has been the case for the past several years, Piffaro co-directors Joan Kimball and Bob Wiemken assembled their roster of pieces based on theme groups that zero in on the various societal functions performed by the music of the 15th and 16th centuries. “Love, Lust, Life” began with “Spring is in the air,” then continued with “Love on a lazy Spring afternoon,” “Love can be cruel,” “Love gets Frisky” and “Love on the Dance Floor” for the concert’s first half. After intermission, the music-making continued with “Again with the Dancing,” “Love’s Yearning,” “Love’s Burning” and finally “Love victorious!”

In a distinct break from the Middles Ages, the composers of the Renaissance were more frequently patronized by Europe’s royal and aristocratic families than they were by the pope and prelates of the Roman Catholic Church. The result was that, for the first time since the collapse of the ancient Roman Empire’s western provinces at the end of the 5th century, secular music became the predominant style rather than sacred choral music. “Love” in all its manifestations, rather than “faith” in all of its revelations, became the most common theme of music with a text. And, in the realm of instrumental music, music for the dance became the common coinage of the new realm.

Piffaro players Grant Herreid, Priscilla Herreid, Greg Ingles, Joan Kimball, Eric Schmalz & Bob Wiemken played their assortment of bygone instruments with panache and precision. They caught the unbounded energy of music that boldly asserted the return of European society to security, prosperity and modernity after centuries in the dark thralldom of one barbaric invasion after the next. And they played it with commanding technique.

Trio Eos proved itself an unevenly assembled vocal ensemble. Only soprano Jessica Beebe sang with complete beauty of tone and stylistic assurance, investing her interpretations with passion and pleasure. Mezzo Maren Montalbano displayed a voice of surpassingly beautiful colors but lacking the forward projection to send it out into the main sanctuary of Chestnut Hill Presbyterian Church. Sadly, soprano Michele Kennedy offered a tone that tended toward the shrill even when soft and edged into stridency when pushed into loud.

Pennsylvania Ballet brought its 2018-19 season to a thrilling culmination May 9-12 in the Academy of Music with a triple bill of modern choreography. The roster of ballets performed was comprised of Jorma Elo’s “Trigger Touch Fade” in its world premiere, with Christopher Wheeldon’s “DGV: Danse a Grande Vitesse” opening the program and the company premiere of Jerome Robbins’ “Glass Pieces” bringing it to a close.

Elo set his ballet to music by Franz Joseph Haydn and Johann Sebastian Bach. His choreography struck me as falling securely into the tradition established by the late George Balanchine, wherein classical music of the 18th century was visualized through movements and gestures that went far beyond mirroring the ups and downs of the score in favor of revealing the inner workings of the inspiration that created the music in the first place.

Elo was particularly effective manifesting the heart and mind of a Bach violin concerto, here beautifully played by soloist Luigi Mazzocchi and the Pennsylvania Ballet Orchestra under the sensitive baton of Beatrice Jona Affron. The music’s baroque counterpoint sang as the aural foundation of the dancing onstage.

Elo set “Trigger Touch Fade” for two solo couples supported by eight members of the corps: the one intensely romantic much like matching pearls, the other brightly precise like sparkling diamonds. Principals Lillian DiPiazza and Sterling Baca were the former Friday evening, May 10. They danced with flawless ensemble, moving into and out of and then back into each other’s arms with immaculate oneness of intent.

Roxborough principal dancer Oksana Maslova and soloist Zecheng Liang were the latter couple, and they danced with dazzling clarity of line and scintillating vitality of rhythm. Both couples delineated Elo’s expert use of the arms: DiPiazza elegant, Maslova spirited, Baca muscular and Liang sinewy.

Shortly after the close of the run, the Ballet’s artistic director, Angel Corella, announced Liang’s promotion to the rank of principal – a well-earned recognition of talent and commitment from a director who has assembled the finest company of dancers in the troupe’s history.

Premiered in 2006 by the Royal Ballet, Covent Garden, in London, Wheeldon’s “DGV: Danse a Grande Vitesse” is set to Michael Nyman’s 1993 score commemorating the opening of a French railway line. I hasten to add that both the original music and the subsequent choreography suit the event perfectly. With 24 dancers dashing madly about the stage, patterns of gestures form waves of movements that transform from one structure to another without a break in the connections. The entire ensemble danced it beautifully for an audience that packed the Academy of Music Friday night.

Jerome Robbins, who worked under Balanchine’s tutelage at New York City Ballet when he wasn’t working on Broadway, set his “Glass Pieces” to the “minimalist” music of Philip Glass. The score’s recurring phrases and harmonies over its hypnotic rhythms inspired Robbins to create one of his most dazzling dances. Among the many excellently performed solo sections were those danced by Maslova and Jermel Johnson.

In another company milestone, Sunday afternoon’s performances marked the retirement of principal Ian Hussey following a 15-year career with the company. His was a bright, engaging face that graced a superbly trained body that could – and did – dance every part of the company’s repertoire, from the oldest and most revered classics to contemporary ballet’s most startling innovations. He will be missed.