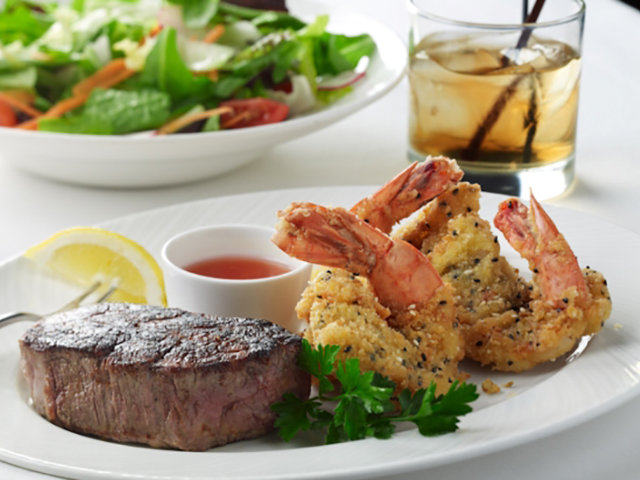 Palm, the classic American steakhouse on the ground floor of the historic Bellevue Hotel, 200 S. Broad St. (it’s part of a huge chain of 24 Palm restaurants, stretching from New York to California), reopened on July 15 after being closed for one year for a major renovation.

Regular menu prices at the Palm are not for those with heart palpitations. For example, a jumbo shrimp appetizer is $20; a lump crabmeat cocktail is $24; a pepper-crusted ahi tuna entree is $43; a 12-ounce Wagyu rib-eye steak is $59; a 28-ounce Porterhouse steak is $65; a 36-ounce prime double-cut New York strip steak is $99.50.

These ethereal prices are in the same ballpark as those of other center city steak houses such as Barclay Prime, Ruth's Chris, Del Frisco's, Prime Rib, Capital Grill and Butcher & Singer. What amazes me is that Philadelphia is supposed to be the poorest big city in the U.S., and yet if you walk into any of these steak houses on almost any night of the week, you will probably see the restaurant crowded if not full, even if there are hundreds of seats to fill, as in the case of Palm or Del Frisco's. So somebody has big bucks besides lawyers and professional athletes.

The food at the Palm is definitely not a high-steaks gamble. The New York strip steak was chewy but flavorful — and the leftover part was even better when nuked the next night. I was all over it like a fat kid on a Snickers bar. A thick-cut applewood smoked bacon appetizer was way too fatty, but whoever made the coconut-crusted sea scallops, I am very close to worshipping the ground he/she walks on.

We rarely eat lobster, but the whole Nova Scotia lobster was swoon-worthy. (Palm is offering a special through Aug. 15 that includes a 4-found lobster for two plus two starters and one side dish for $99.) A side dish of cottage fries and fried onions was so addictive, we scarfed up the fries as if we were in an airplane going down. 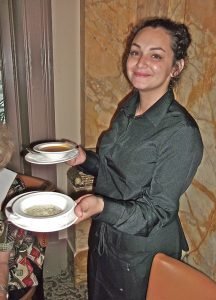 It is hard to imagine that any restaurant server in the city could be more charming and efficient than JoeAni Tursi at The Palm. (Photo by Len Lear)

Remarkably, the Palm restaurants are operated by the descendants of the same two families that opened the first Palm on Second Avenue in Manhattan 91 years ago. John Ganzi and Pio Bozzi were Italian immigrants who planted the first Palm in New York City in 1926. They wanted to name the restaurant after their hometown in Italy, Parma, but when they went to register their business, a clerk misunderstood their accents and issued a license for “The Palm.”

How did the walls at each Palm restaurant become lined with cartoons and caricatures of their customers? The company’s flagship restaurant was located around the corner from King Features Syndicate headquarters, and according to Walter Ganzi Jr., “Our grandfathers did not have enough money to decorate the restaurant. Instead of singing for their supper, the local newspapermen, who had very little money, agreed to draw cartoons on the restaurant’s walls in exchange for plates of spaghetti.”

Many famous cartoons had early beginnings on the Palm’s walls, including “Beetle Bailey,” “Popeye,” “Batman,” “Family Circus,” “Hi & Lois” and “Hagar the Horrible.” The original drawings were sketched in charcoal, pastels and markers, which faded over the years. The drawings were restored in 1995 and insured for $500,000.

For the last 26 years, the local Palm’s caricatures of customers, including local politicians, athletes, TV personalities, etc., were created by Philly native Bronwyn Bird and then her son, Zack, of Germantown. “I will admit that not everyone likes his or her likeness,” Bronwyn once said. “At the Philadelphia restaurant, one female customer was even caught applying eye makeup — mascara and eyeliner — to her portrait on the wall!” Bird called her creations “flattened likenesses” rather than caricatures.

When the Philadelphia Palm, which opened in 1989, closed last year, about 2000 caricatures and cartoons were taken down, and about 500 were given to the people pictured in them. General manager Paul Sandler said last week that the remaining ones will be put back on the walls.

One thing that really impressed us was the friendliness and efficiency of the young servers, especially JoeAni Tursi of South Philly, who is an absolute treasure. Valet parking is available on Walnut Street just west of Broad, for $21.