Over the hills and through the woods 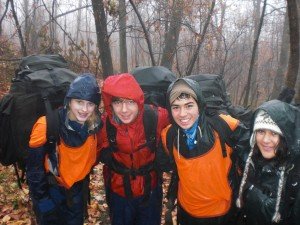 As most students relaxed during the mid-November pause between Halloween and Thanksgiving, Springside School’s Erik Dreisbach and Chestnut Hill Academy’s. Robert St. George accompanied a group of 22 Springside and CHA students on a leadership course conducted by Outward Bound Philadelphia.

The schools are interested in creating an Upper School experiential peer leadership program and partnered with Outward Bound for this pilot program. In order to gain entry to this five-day trek along the Appalachian Trail, all interested freshmen and sophomores submitted an application and essay --11 students from each school were selected. The expedition took place in the Michaux State Forest near Chambersburg, Pennsylvania.

Some activities -- like hiking without instructors -- forced the students to rely solely on mutual trust. All together, it “proved how much we had learned and grown together as a group,” said Springside sophomore Kylie Grow.

Each participant learned to feel comfortable enough to place complete trust in the other patrol members. Some students struggled to find words powerful enough to emphasize the importance and closeness of the patrols. As CHA sophomore John Henry put it, such group experiences “help you understand yourself and others better.”

But there was more on this Outward Bound trip than group building activities to test the students. Both patrols endured days of freezing rain, armed only with tents, rain gear, and a canopy of withering and almost leafless trees. One night, during a particularly torrential downpour, the instructors woke the students at midnight to do a “lightning drill” as a necessary safety measure.

But in a time of weariness and severe weather, Tracy’s group made the best of its situation.

“We played a game we dubbed ‘lightening round’ … [in which] you shouted out two things like cats and dogs or summer vs. winter, and you had to say which was your favorite,” he said. “Soon enough, the idea of being stuck in the rain at 1 a.m. no longer seemed so terrible.”

Despite the agony of being awake during an early morning dose of sleet and lightning, many students cited this particular night as their favorite moment of the trip, a true testament to the ability of the students to overcome even the most dismal situation.

Both schools definitely view the expedition as a major and rewarding success that has enhanced each student’s education.

“From everything I have heard, the experience was profoundly meaningful., said Springside Head of School Dr. Priscilla Sands.

“In addition to increasing the strength of one’s mind and body, a student must also have the opportunity to strengthen his or her own spirit in order to truly experience a well-rounded education,” he said.

CHA Headmaster Frank Steel, also pleased with the turnout of the course, said both schools are “eager to see how we might enlarge the program,” which he called “a wonderful extension of the our outdoor education.”

Both schools hope to use such experiences to extend the bounds of traditional education and to encourage intellectual growth in ways that Dresibach believes are “only possible by such an experience.”

Most of the participants believe that everyone should participate in something similar.

“It doesn’t matter if you’re not ‘into’ the whole being in the woods part,” said CHA freshman Graham Allen “You forget that. I would strongly recommend this to anybody … it changed me in ways I can’t even verbalize.”

Allie Schreffler is a junior at Springside School, writes for the school newspaper, and is an Outward Bound alumna of their ‘Heroic Journey’ course (Summer 2009).