At Northwestern University some other students “would be insensitive enough to say to my face something derogatory or negative about Nixon. It really struck me as very strange that someone … 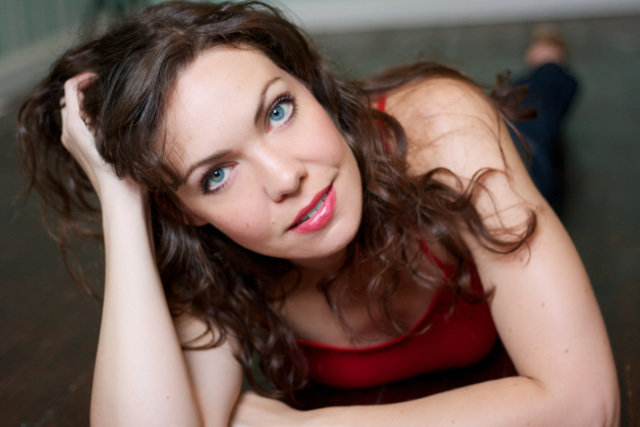 At Northwestern University some other students “would be insensitive enough to say to my face something derogatory or negative about Nixon. It really struck me as very strange that someone wouldn’t understand that he’s my grandfather, a person whom I love.” (Photo by Kim Carson)[/caption]

Jennie Eisenhower, one of Philadelphia’s busiest and most respected actresses says, “I love being weird. I think at my core there’s just a little bit of quirkiness, a little bit of weirdness that allows me to access strange people. I think I’m at my best when I’m not playing someone who is just like me.”

Currently in the Arden Theatre Company’s production of Alfred Uhry and Jason Robert Brown’s “Parade,” Eisenhower has been in love with acting since she was a little girl growing up in Berwyn. “There was some home theater going on at a very young age,” she said in a recent interview at an Old City coffee house.

Her parents, Julie and David Eisenhower, “always wanted their children to be happy, whatever that is. Whatever we liked, they liked. I really liked singing and dancing, so they put me in dance class and piano lessons.”

While the support she felt from her parents isn’t all that unusual for talented kids growing up in a wealthy suburb, Eisenhower’s background is. Jennie, 35, is one of only three people in American history — the other two being her brother Alex and her sister Melanie — who have been the great-grandchildren of one president of the United States and the grandchild of another unrelated president.

Jennie’s father, David, is the grandson of President Dwight D. Eisenhower, and her mother, Julie, is President Richard M. Nixon’s daughter. Proud of her heritage, she insists she never felt all that different from other kids “because that’s just who I was always. I never knew anything different. I wasn’t aware of how different I was until I was in elementary school, and children’s parents started to say to them, ‘Oh! This girl’s different.’ I was so proud of my heritage because my parents are proud of our family. I grew up feeling this is a cool thing. It makes me different, but it doesn’t make me in any way weird.”

Being Richard Nixon’s granddaughter did become something of an issue in high school “when children started to become political.” Her grandfather, whom she called “Ba,” was quite controversial.

“In college I wasn’t picked on, but someone would be insensitive enough to say to my face something derogatory or negative about Nixon. It really struck me as very strange that someone wouldn’t understand that he’s my grandfather, a person whom I love. I got angry in college. Overtime I’ve mellowed because I feel so peaceful with who he is and about my relationship with him. I don’t need to fight people anymore.”

But she does need to act on stage. “The first time I got bit by the bug really badly was when I got a middle school lead role as the Artful Dodger in ‘Oliver.’ I was a character actress. I loved being a boy. That was exhilarating. It was the process of putting together a musical that I fell in love with: the rehearsals and how close you get to the cast and the celebration of the opening and people coming to see you.”

From there she went to New York for a year, having by any measure a successful time. Thanks to the Northwestern Showcase, she got to New York with an agent, got her union card and booked several shows, one of them Off-Broadway. “I was doing what I set out to do, but I didn’t feel happy there.”

She didn’t like the lifestyle. “The scene is you live in New York and audition for things all over the country, and you go away and then come back. I couldn’t handle that because I wanted to have a family and be established somewhere and not have to do that.” She had no idea where that “somewhere” would be.

Jennie took about a year off to be a personal shopper and bartender and then realized that she really missed acting. “The show that got me back to work was (Michael Ogborn’s) ‘Baby Case’ at the Arden.” That was in 2001.

While she has continued to work elsewhere from time to time, the vast majority of her career has been in Philadelphia. In the 12 years since ‘Baby Case,” she has worked at most of Philadelphia’s major theaters, including, in addition to the Arden, Act II Playhouse in Ambler, Bristol Riverside Theatre, People’s Light and Theatre Company, Philadelphia Theatre Company, The Walnut Street Theatre (main stage and studio) and the Wilma Theater.

Not only does she act, but she also does some directing, gives private voice and acting lessons and is an adjunct faculty member at Temple University. Married to Doctor of Physical Therapy Tony Cheslock in 2011, they are the new parents of Chloe Anne Cheslock, who made her entrance in July.

If given the choice between directing and acting, she says, “I would perform. Directing exercises a different part of me that I really appreciate. The thing about directing that’s’ tough for me is I can’t let it go. I can’t come home after a day of directing and hang out with my husband, watch some TV and go to sleep. My wheels are still turning. Whereas with performance there’s this element of leaving it there. I am not Lucille (her character in “Parade”). I am Lucille at the theater. I’m not living out her life when I’m home with my baby.”

After “Parade” ends its run on Nov. 3, she’ll have some time off before being part of the cast of the Walnut Street Theatre’s production of “Arsenic and Old Lace,” which, after rehearsing here, starts its life at the Fulton Opera House in Lancaster, Pa. (Jan. 28 to Feb. 16), and then moves to the Walnut for a March 11 to April 27 run.

There should be enough strange characters in that old classic comedy to satisfy her enjoyment of being weird on stage; eh?

Homage to Broadway greats and a hint of nostalgia