On a mission to dispel the myths: Mt. Airy pair have rescued over 150 pit bulls

On a mission to dispel the myths: Mt. Airy pair have rescued over 150 pit bulls 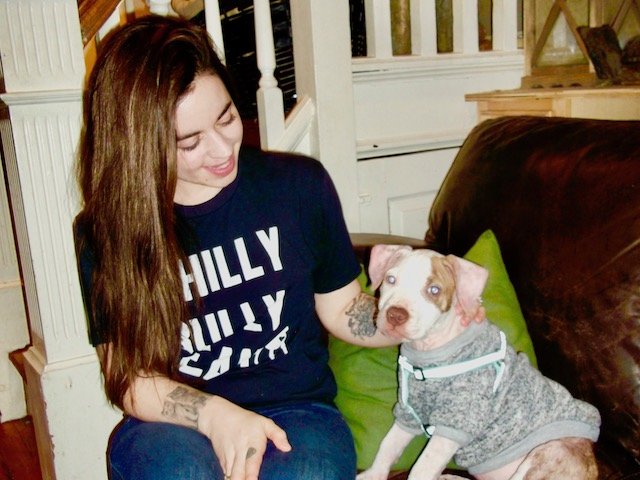 Pit bulls arouse strong passions. To some, they are canine killers that should be banned. According to banpitbulls.org, at least 937 towns and cities in the U.S. have laws on the books banning pit bulls. We recently saw the movie, “A Dog’s Way Home,” a thrilling adventure story about a wonderful, lovable dog which its family had to give away because of the law in Denver that bans pit bulls (even though the dog in question did not look anything like a pit bull). When a pit bull does something terrible, it is all over the news media and social media. When the same thing is done by a German Shepherd, Rottweiler, Doberman Pinscher, etc., it rarely even makes the news.

Many observers have pointed out that this breed discrimination is similar to racism — punishing millions for what a few have done. Bronwen Dickey, author of “Pit Bull: The Battle Over an American Icon,” a book that tries to replace hysteria with actual facts, has become a target of threats and harassment from haters of pit bulls. Her bookstore appearances now require security, and her home has been equipped with surveillance cameras.

“Secondly, there’s no science that bears out the idea (that they are inherently vicious). When people say, ‘Oh, these dogs are bred for fighting,’ it’s true that the original breed, the American pit bull terrier, which originated in 1889, was developed for fighting.

“But the three other breeds that are lumped into this category have always been dog show conformation breeds. They don’t have that heritage. The fact that they get lumped in is part of the problem because we’re basing things on what they look like and not necessarily what they are. My own pit bull is called Nola. She is 7 and is extremely affectionate, wonderful and smart.”

Two Mt. Airy residents who are literally on a crusade to dispel the myths and spread actual facts about these maligned breeds are Marvin and Jess Graaf. Marvin, 36, originally from the Poconos, and Jess, 33, originally from New Hampshire, have been a couple for 10 years and married for five. They have lived in Mt. Airy for eight years.

“I’ve always had pit bulls since I was 11,” said Jess, “and Marvin had a pit bull when I met him. We are both pit bull lovers.” The couple started the nonprofit Philly Bully Team one and a half years ago, which takes out pit bulls and pit mixes that were scheduled for euthanasia at area shelters. “We often pull them off death row with not a minute to spare.” 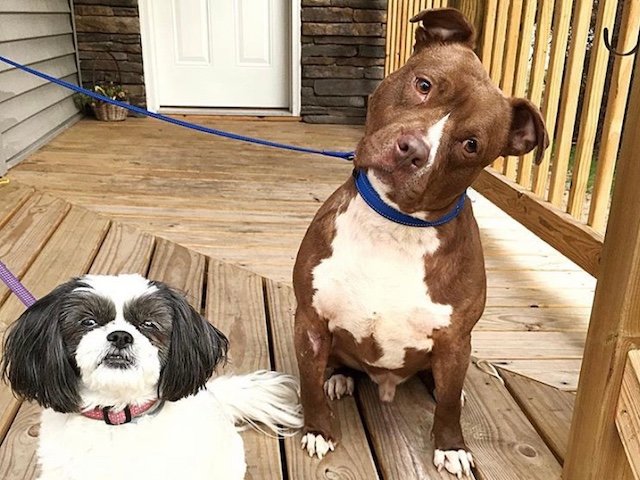 Jude (right) was adopted by Laurie West from upstate New York. He is a former fighting dog, but since he was rescued by Philly Bully Team, he is as sweet and loving as any dog can be.

They then feed the dogs, take them to a vet, get them spayed and checked out, place them in foster homes and try to find permanent homes for them. They have saved over 150 from euthanasia lists and shelters. During my recent two-hour visit to their home, twice people knocked on the door to pick up their new pets.

“Kennels are 95 percent full of pits and mixes,” said Jess. “They needed our help. We have 15,000 followers on Instagram, mostly in the Philly area. They fill out an application, and we do a home and yard inspection. I have six other women volunteers. They do a fantastic job. Half of the inspections we do are virtual inspections.”

According to Marvin, “We have an Amazon Wish List, so people send money or things the dogs need, so we can provide everything the foster families need.” (The Graafs have also saved cats, guinea pigs, bunnies, foxes and a raccoon.)

“For example,” said Marvin, “Mia was starved and left by the side of the road. We took her to Penn. They said it was the skinniest dog they ever saw alive. We raised $18,000 to $20,000 to save her, and whatever was left over after Mia’s expenses we used for other dogs. Our own new dog, Winnie (a real cutie), had been neglected.”

Some readers will no doubt know Marvin as the owner of three Mt. Airy restaurants: the Cresheim Valley Grain Exchange, 7152 Germantown Ave.; Pop-Pop’s Sandwich Shop, 7060 G’town, and Nonna’s Pizza Tavern, 7200 G’town. “I love being a restaurant owner, but my first priority is the dogs,” said Marvin.

Anyone who Googles Philly Bully Team will find out that a pit bull rescue group in New York has sued them for alleged defamation. At one time the two rescue groups were cooperating, but according to Jess, “They later did some things we didn’t like, so we decided to do our own thing.”(I did reach out to the New York group, which replied by email with a brief accusation that could not be verified.)

I did talk to a woman who works in Chestnut Hill and recently adopted a pit bull from Philly Bully Team, but she did not want her name used in this article. “I can’t say enough about Jess and Marvin,” she said. “They are so dedicated and wonderful, and what they are doing to save these animals in beautiful!” 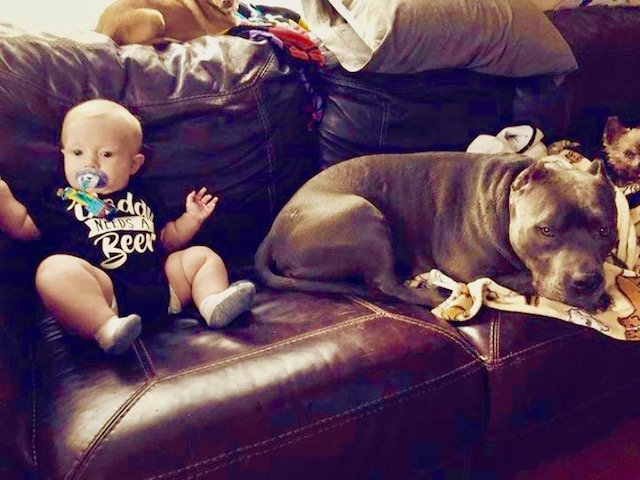 Banner was adopted by Stacia Aab from West Virginia. He lives with big dogs, small dogs, cats and a baby, and they all get along harmoniously.

Another adopter, Regina Bromley, of East Mount Airy, said, “We have fostered four dogs in total through Philly Bully Team — London, Petey, Tyson and Phoebe — all of whom are now in their forever homes! When Blanche came into the picture, we were smitten with her. She was taken to ACCT to be euthanized because she is deaf. She was filthy and nervous. Her nails were so long that they were curling out sideways, and her paw pads looked like they had been burned, probably from being forced to live in her own urine.

“As soon as Blanche was available for adoption, we sprang on it! We knew that if she came to live with us, we could give her the love and adoration she deserved, and we were not intimidated by her disability. Deaf dogs can be trained and can lead happy, fulfilling lives! We fell head-over-heels in love with her the instant she came home. It hasn’t always been easy, but we are so grateful to have the support of Philly Bully Team through all of our ups and downs.”

According to Jess, “The overwhelming majority of these dogs have made wonderful pets. The others are the victims of backyard breeding — not trained, not socialized. People got them for the wrong reason. I have handled over 300 pits and have never been bitten. They are people pleasers.

“My favorite was Jude. Set to be euthanized. Covered with wounds. Had been used for fighting. After a couple months a retired lady in New York adopted him. He lives with a shih-tzu. He was the hardest for me to let go. We always consider them our dogs, too. Jude has his own Instagram account. He was trained to be mean, but he is now SO SWEET! He gets along great with the shih-tzu …

“We have 35 dogs now in foster homes. We have two dogs and four cats of our own. The only problem I ever had was when I was walking a pit bull, and a small dog attacked him.”