In an age of dot.com startups, why would any enterprising young man launch a labor-intensive bread company in a market with no shortage of competition? 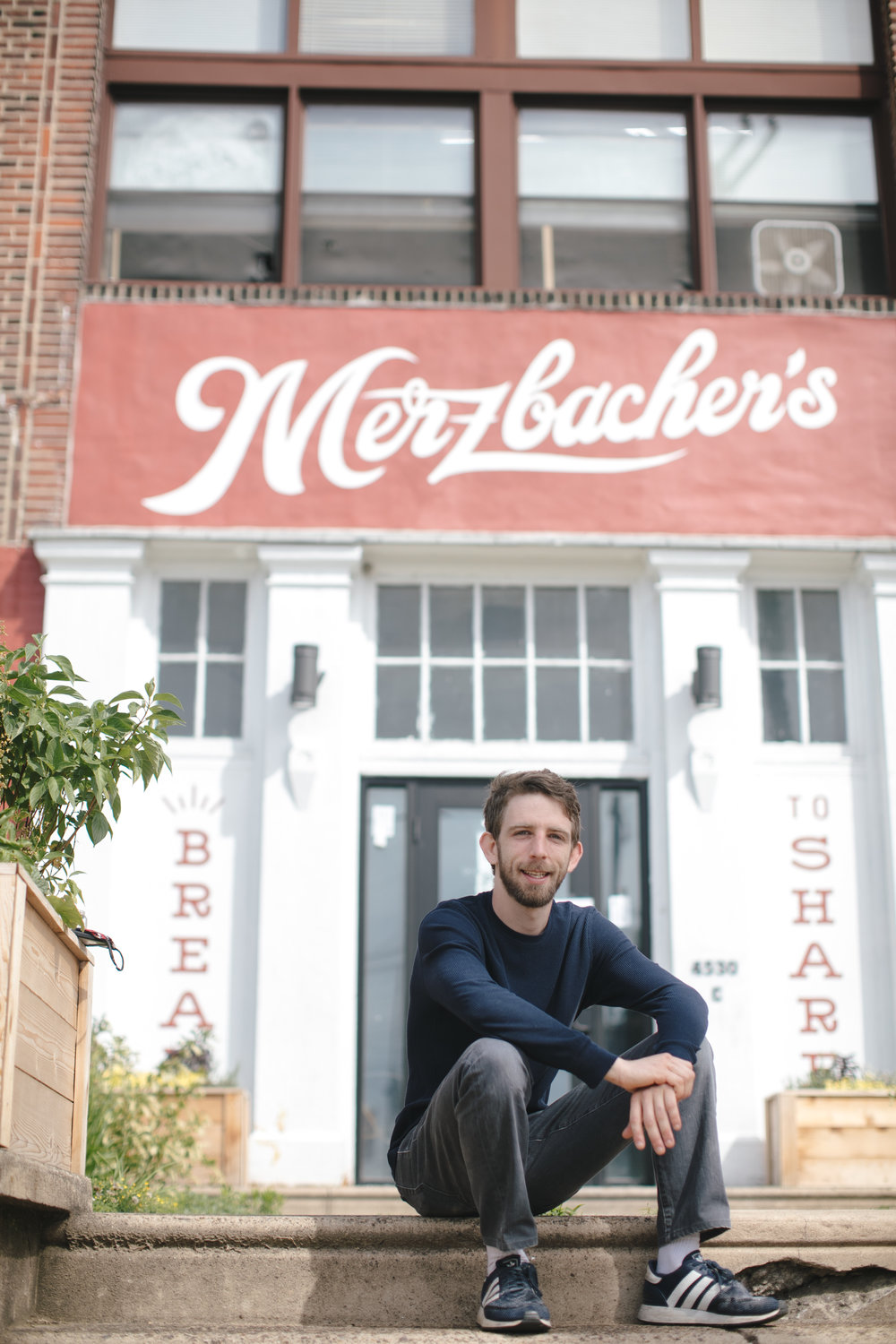 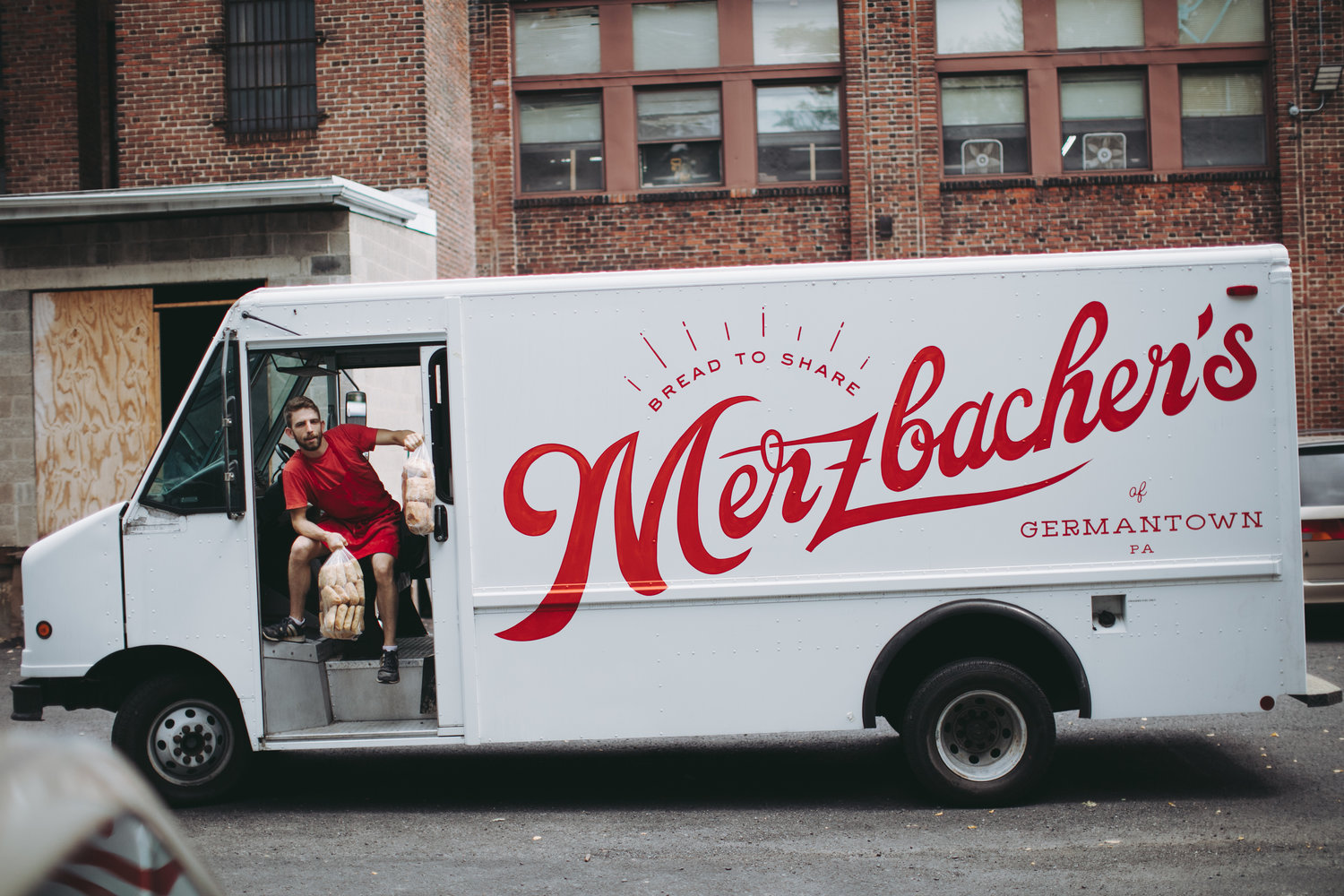 In an age of dot.com startups, why would any enterprising young man launch a labor-intensive bread company in a market with no shortage of competition? For Pete Merzbacher, 31, the answer was simple.

“It started as a hobby and became an obsession.”

His obsession resulted in the creation of Philly Bread in an Olney rowhouse in 2013. Seven years later, the business relocated to a 4,800-square-foot brick warehouse at 4530 Germantown Ave. with 29 employees and a new brand, Merzbacher’s Bread. Something about the name ring’s true, as if it had been in the neighborhood forever.

“We are an old-school bread bakery with a new-school approach,” he said.  “Germantown is a historic neighborhood with a strong sense of community. Our mission is  bringing people together by making bread.”

Originally from the Boston area, Merzbacher worked in agriculture and community gardens after college before relocating to Philly in 2012. At just 22, with no special training or experience in the baking industry, he catapulted his passion for bread-making into a viable start-up.

Without investors or loans, Merzbacher built his business the old-fashioned way, wearing multiple hats as baker, salesman and delivery truck driver. “My first delivery vehicle was a bike,” he said. Merzbacher still drives the company’s hand-painted bread truck around Center City himself.

Merzbacher did not hire a market research team or get a Wharton degree. Instead, he conducted his own research, improving his product by speaking with chefs who were his first customers. He also traveled a lot and followed his taste buds, eventually developing recipes that satisfied his discriminating standards and went beyond what was already available. No surprise they have a 5-star rating on Yelp.

Initially, restaurants were Merzbacher’s biggest customers. But when the pandemic hit, restaurants closed while sales at markets soared, including Giant, Whole Foods, DiBruno Brothers and Farmer’s Markets throughout Southeastern Pennsylvania and Jersey. Luckily for us, Merzbacher’s Bread is available at all Weaver Way locations.

The aroma of fresh-baked bread has not gone unnoticed in Germantown, where customers can now place orders online for same-day pickup at the bakery window, Thursday through Sunday.

“At Merzbacher’s, we rise each morning, often before the sun, and challenge ourselves daily to bake inventive and approachable breads that we can’t wait to share with our neighbors,” said Merzbacher, who views bread making as way to bring a diverse community together.

Wearing face masks, with hands coated in flour, his employees share their life stories and in the process form a bond. If you’ve ever observed surgery, you know surgeons blast hard rock music while cutting into your spleen. Same goes for keeping the rhythm going when kneading bread.  Merzbacher’s team listens to music as eclectic as their recipes, from Dominican bachata to funk, soul or psychedelia.

What’s different about Merzbacher’s product line? Just about everything, starting with their Philly Muffin. An inventive twist on the classic English muffin, the Philly Muffin has all those “nooks and crannies,” but it is chewier and more flavorful than an English muffin and made with freshly milled cornmeal. Its novel square shape makes it ideal for open-face sandwiches or burgers.

Merzbacher’s motto seems to be “Do it better and they will come.” That includes a Malty Grain loaf, made with soaked beer malts from local breweries and roasted oats from area farms along with flax, sunflower and sesame seeds.

Other unique products are a Sweet Potato Bun, French Toast Loaf with cinnamon and raisins, Focaccia with olive oil and fresh rosemary and a Golden Roll based on a French baguette. Another bestseller? Pizza dough! For those who prefer to bake their own bread, Merzbacher’s offers all the ingredients you need to make bread at home. For holidays, they get creative. At Thanksgiving, Merzbacher’s came up with a Seeded Sweet Potato Challah with cranberries.

Merzbacher's Bakery participates in community outreach. When you purchase a “Bread to Share” loaf online, it will be donated to a local nonprofit that feeds those in need. Thousands of Philadelphians recently discovered Merzbacher's Bakery when Philly Muffins were included in a free food delivery program for seniors amid the pandemic sponsored by United by Blue, a company committed to sustainability and the environment, and Independence Blue Cross.

All Merzbacher breads are vegan and GMO-free. For more information visit Merzbachers.com.