To celebrate “The Statue,” a new WHYY podcast series by Mt. Airy neighbor Paul Farber and Monument Lab, Our Town searched out the statues in the Northwest. 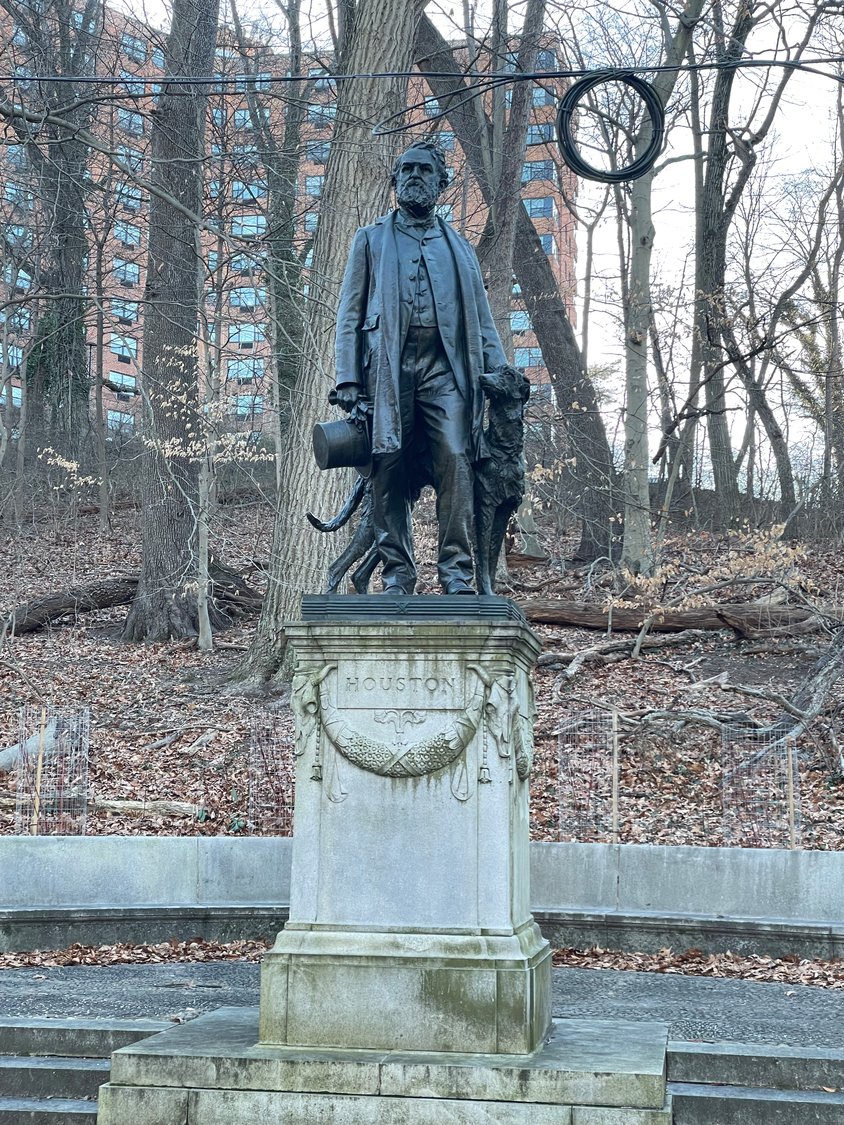 The statue of Henry Houston, developer of the west side of Chestnut Hill, was placed in Germantown in 1900 near his earlier real estate projects and now lost pleasure gardens along Lincoln Drive.
Photo by Edward Robinson
Posted Thursday, January 19, 2023 12:00 am
by George McNeely

To celebrate “The Statue,” a new WHYY podcast series by Mt. Airy neighbor Paul Farber and Monument Lab exploring the creation and meaning of the Rocky statue, Our Town searched out the statues in the Northwest and how our understanding of them has evolved.

Stone or bronze commemorative statues in this area started with the arrival of the first European settlers in the 17th century.

The earliest person commemorated was (Franz) Daniel Pastorius (1651-1720), who organized a group of German immigrants to create the German Township in 1683.  That group included Lutheran Pietists, Mennonites and Quakers seeking religious freedom in the recently founded Province of Pennsylvania.

In the succeeding centuries, some residents of Germantown maintained strong associations with their German heritage, and some spoke German at home into the 19th century.

In 1901, the National German-American Alliance proposed a monument to Pastorius in Germantown’s Vernon Park as he was considered the “father of German immigration to America.”  Designed by German-born American sculptor Albert Jaegers (1868-1925) in the grandest Beaux Arts style, it features a heroic idealized figure of Pastorius leading appreciative immigrants and crowned by a massive seated figure of “Miss Civilization.” It is by far the most elaborate monument in the Northwest.

The cornerstone was laid in 1908 but its final unveiling was delayed until 1920 due to anti-German sentiment during World War I.

Not all were pleased. Curiously, the Germantown Historical Society lambasted it as “crude, gross and meaningless as art or history.”  Then, at the height of revived anti-German sentiment during World War II, the monument was protected with a plywood box similar to the one that until recently encased the monument to Christopher Columbus in South Philadelphia. Other local statues of German-American figures faced similar challenges at that time.

Happily, the handsome monument survived and is now appreciated mostly as a testament to religious freedom and the founding of Germantown.

Nearby in the Wissahickon Park is another statue dedicated to religious toleration.  Erected in 1883, the single stone figure created by sculptor Herman Kirn depicts a gentleman in a distinctive Quaker coat and hat, who some believe might be William Penn. It stands on a bluff called Mom Rinker’s Rock on the east side of the valley, a short walk from the end of West Hortter Street.

Kirn is perhaps best known for the ensemble ambitiously titled the “Catholic Total Abstinence Union Fountain” that he created in 1876 as part of the Centennial Exposition in Fairmount Park (recently handsomely restored by Material Culture).  His figure of “Toleration” is believed to have also been created for that fair and was donated to the Wissahickon Park by John Welsh, the merchant, diplomat, and respected chairman of the board of finances for the fair, who lived nearby in “Spring Bank” on Wissahickon Avenue.  He owned considerable land in the area and also donated to the Park the land where the statue stands.

The better known and more frequently visited sculpture in the Wissahickon Park is the stone kneeling figure of the Native American chief Tedyuscung (1700-1763).

As discussed in an earlier Our Town column, the earliest statue at the site was a wooden statue of a Native American created in 1854 by carpenter and theater painter Pat Owens.  It was popularly believed to be a portrait of Tedyuscung and was sited on a narrow protruding rock that was popularly known as “Council Rock,” incorrectly believed to have been the site of Lenni-Lenape tribal council meetings.

The self-proclaimed “King of the Delawares” (also known as the Lenni-Lenape), Tedyuscung was torn between remaining loyal to his native traditions or assimilating to European ways. He often wore Western clothes, may have converted to Christianity, and struggled much of his life with the alcohol brought by European traders.

Tangled in the complex politics of the French and Indian Wars, he reluctantly signed onto the Treaty of Easton in 1758 that formally relinquished the tribe’s rights to their historic lands in eastern Pennsylvania. The tribe then moved to near Wyoming, Pennsylvania, just north of Wilkes-Barre. Soon after his death, the tribe was pushed even further west of the Appalachian Mountains.

That early wooden statue of Tedyuscung deteriorated, was replaced by another in wood, and then the current stone statue was erected in about 1902. Created by John Massey Rhind, a Scottish-American sculptor, the artwork was funded by Mr. and Mrs. Charles Henry, members of the Houston family.

Despite Tedyuscung’s preference for Western clothes, the statue is clad in native dress. It also inaccurately sports the Plains Indian feathered ceremonial or war bonnet that was later featured in numerous Western films. Such headdresses were not worn by the Lenni-Lenape. We know that from various historical sources, including portraits of Lenni-Lenape leaders commissioned by John Penn (son of William) and painted in 1734 by Swedish painter Gustavus Hesselius, now in the Philadelphia Museum of Art’s American galleries.

So the statue, while handsome, does not accurately depict Tedyuscung and is more a testament to our romantic nostalgia for the Native American people we so brutally displaced.

The fourth important sculpture in the Northwest is the bronze figure of Henry Howard Houston (1820-1895), the 19th-century railroad entrepreneur, real estate developer, and philanthropist perhaps now best known for creating the west side of Chestnut Hill.

It is hidden off the intersection of Harvey Street and busy Lincoln Drive, (Most readers have likely whizzed by without noticing.)  Charmingly, Henry Houston is depicted with his hand resting on a handsome Irish wolfhound. The statue was placed there in 1900.

The statue was created by prolific Scottish American sculptor J. Massey Rhind (1860-1936). He also worked in the grand Beaux Arts tradition and caught the late 19th and early 20th century national fervor for patriotic and commemorative images in that style, with commissions from Canada to South Carolina. Local works by Rhind include the paired monoliths at the entrance to the Benjamin Franklin Parkway from Logan Circle, dedicated to lost Civil War soldiers and sailors.  (Readers have likely whizzed past those innumerable times as well.)

The location of the sculpture far from west Chestnut Hill is curious.  It was originally placed there by the Fairmount Park Commission in recognition of his donation of nearby land to the park.

As Houston built his fortune through the Pennsylvania Railroad and later investments in other railroads, coal, shipping, and oil, he lived in a towered Italianate house at the corner of Tulpehocken Street and Wayne Avenue in Germantown.  His earliest real estate projects were in Germantown and included single and multifamily housing in the surrounding blocks. He also funded nearby Saint Peter’s (Episcopal) Church between 1873 and 1883 with designs by architects Frank Furness, George Hewitt and Theophilus P. Chandler. (The campus is now the Waldorf School.)  Just as a decade later he funded the building of Saint Martin’s (Episcopal) Church in Chestnut Hill, he believed that such churches attracted the “right” kind of buyers for his nearby houses.

As the Friends of the Wissahickon’s website explains, “Henry Houston’s original gift of 11 acres became known as the Houston Ramble. It was supplemented by his descendants and others with six more acres. In 1900, with $30,000 given by the Houston family, the area was developed into a late Victorian-type garden, with walks, trails, bridges, pergolas, and two lakes. Over the years, the garden and its fixtures were neglected and deteriorated, the lakes were drained, and invasive plants took over.”

That area is now hard to identify, but images found in the digital archives at the Chestnut Hill Conservancy show its delights. When standing in front of the statue of Henry Houston, it was diagonally across Lincoln Drive towards the west end of the Walnut Lane bridge.

So, the location of the statue also commemorates Henry Houston’s early involvement with west Germantown, before he moved farther out to create what we now know as the pleasures of west Chestnut Hill.

These four statues remind us of our local history and reveal narratives about our evolving understanding of that history. There are also other monuments in the Northwest. Please send us your favorites. In the meantime, you can find “The Statue” podcast series on the WHYY website.