Thanks to the Families of Houston, local businesses, volunteers and Melissa “Missy” Renfer, the school-based lead teacher at Houston, bright cheerful murals like this one decorate the school’s … 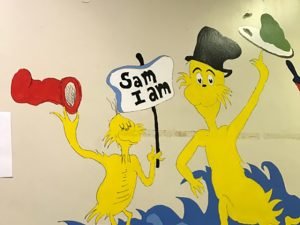 Mt. Airy is often referred to as Philadelphia’s village in the city. It is well-known for being a racially and economically integrated community, and it was even featured in Oprah Winfrey's magazine “O” for its “racial diversity and neighborhood appeal.” It was that diversity that made Karin Annerhed-Harris, of Uppsala, Sweden, and her husband Vince Annerhed-Harris decide to move to Mt. Airy three years ago.

“I think if you ask anyone in Mt. Airy why they moved here, they would all say diversity, but the public schools don't reflect that at all,” the mother of two young children said.

It’s just one of the reasons Annerhed-Harris and five other Mt. Airy families decided to create Families for Houston, a nonprofit whose mission is “to partner with the school community to ensure that all Houston students, current and future, receive a high-quality education.”

“We think the schools should be a good reflection of our neighborhood,” she said. “The whole private school concept is very foreign to me. Public schools in Sweden are very good, but they are funded differently. They are not funded on real estate tax, which evens out the playing field.”

“Champions like Karin are incredibly valuable in helping our public schools to thrive,” she said. “She is doing important work to draw attention to Houston's high quality programs, and by encouraging parents to seriously consider Houston for their child. As a Houston parent alum, I know that our Northwest Schools – Houston, Henry and Jenks – all have benefited from active parent involvement.

“At a time of so much divisive rhetoric around public schools, I applaud Karin for her leadership in fostering a strong, vibrant neighborhood school where all kids can flourish,” she said. “Contributing to her efforts – financially through this 501(c)(3), as a volunteer or as a prospective parent, is the right thing to do as a caring citizen. It strengthens the vital community ties we all cherish in the Northwest, and keeps young families in our neighborhoods.”

"Families of Houston have volunteered at the school, donated materials and are working closely with the school to find additional resources for Houston. I am happy to have them on board," he said.

Recently, members of Families for Houston asked local businesses and neighbors to donate funds and materials to paint murals on the wall.

Kristin Peterson, community partnerships coordinator at AmeriCorps VISTA (at Houston through Philadelphia Higher Education Network for Neighborhood Development), said Families for Houston recently asked neighbors and the Benjamin Moore paint company to donate materials to paint murals on the school's hallway. She said the nonprofit organization has been working to build relationships with residents to create a stronger sense of community at the school.

She added that thanks to the creativity of Melissa "Missy" Renfer, the school-based lead teacher at Houston, the generosity of the community organizations like Families for Houston, and local businesses, the school now has several bright and colorful small murals painted on the walls. She said the students love the new artwork.

"The students seem happier," she said "The murals make the school brighter and more cheerful."

For more information about Families for Houston, go to https://www.familiesforhouston.org/.