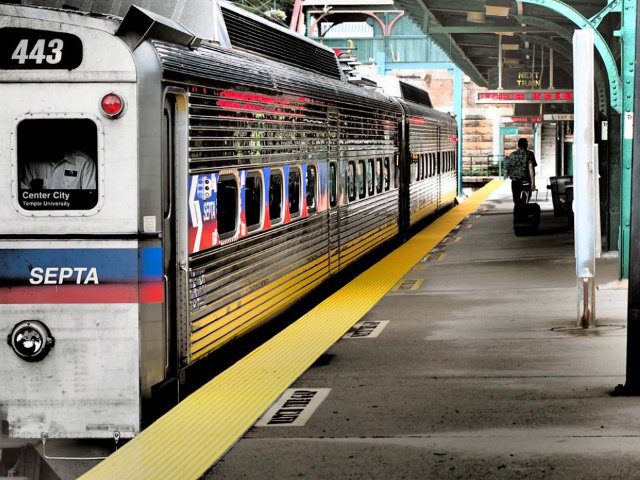 Chestnut Hill resident Steve Feistel was wandering around the community looking for the perfect shot on Aug. 8 of last year. He finally found it at about 7 p.m. on the platform of the Chestnut Hill West Station. His photo, “All Aboard,” ended up winning first prize in the Chestnut Hill Community Association’s first annual photo competition.

With a strong diagonal perspective and vibrant colors, the photo depicts train #443 outbound to center city Philadelphia. One lone passenger, pulling a suitcase behind him, makes his way down the platform.

“The way the person was walking off was a bit of luck,” admitted Steve. “I took a few pictures, but this one was more magical than the others.” He used an Olympus EM5 camera which, he explained, is known for its quality lenses.

Steve, 45, moved to Chestnut Hill from Elkins Park a year-and-a-half ago. He works as an office manager for a small company in Mt. Airy. “I’ve done a little paid photography work in the past — weddings for friends and head shots — but I’m not a professional photographer,” he said. He recently started to do some work for the Chestnut Hill Local. Four of his photos have appeared on the front page; others are inside and on the website. “I do photography mostly as a hobby now, but it’s something I definitely want to pursue.”

Aurora McLean, who won for her photo, “Blue Bikes,” has been an amateur photographer for three years. She had been taking at least one photo every day, just to get into the habit and to practice using her camera. She saw the announcement for the competition on the Morris Arboretum website and thought that by entering she would become more focused by having something specific to photograph.

Like Steve, Aurora took her camera, walked around Chestnut Hill and took pictures of things that looked interesting. While walking down the 8100 block of Germantown Avenue, the Curio Philadelphia shop’s storefront caught her eye. The shop was across the street from where she was standing, but she was able to zoom in with her Nikon D-5000 camera. “It was late afternoon, at around 4 p.m.,” she said. “I really got lucky with the angle, lighting and shadowing. The scene is something you would probably walk or drive by and not notice. So the picture captured something really special. It almost looks like a painting.”

Aurora, 40, lives in Wayne and is director of enterprise change management at AmerisourceBergen in Chesterbrook. “It’s a very technical job,” she said, “so photography provides a nice creative outlet for me.”

The contest was judged by Wendy Concannon, a professional and fine art photographer; Joanne Dhody, a graphic designer and illustrator; Marjorie Hirshorn, an avocational Chestnut Hill photographer; Leslie Purple, an official Garden Club of America photography judge; and Mike Zaikowski, a photographer and owner of Profiles, a printmaking studio.

Celeste Hardester, community manager, Chestnut Hill Community Association, said that 39 photographers submitted 254 entries for the competition. She urges all photographers who are interested to start shooting photos now and to look for an announcement soon about the deadline for the 2015 calendar. “If possible, we would like to publish it this year before the Fall for the Arts Festival,” she noted.

For more information about the calendar or the Chestnut Hill Community Association, contact Celeste Hardester at celeste@chestnuthill.org or 215-248-8811. You can also visit the association’s website at chestnuthill.org.