No bones about it! Mouse bones turned into fine art

Anne Swoyer, of Mt. Airy, engages in one of the world’s most unusual art forms. She takes apart owl pellets and uses the mouse bones in them to create vivid works of art.[/caption] by Constance …

No bones about it! Mouse bones turned into fine art 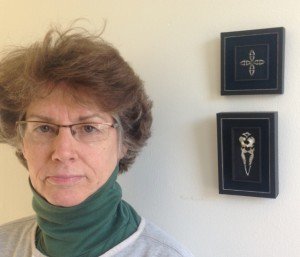 Anne Swoyer, of Mt. Airy, engages in one of the world’s most unusual art forms. She takes apart owl pellets and uses the mouse bones in them to create vivid works of art.[/caption]

Imagine a seed planted secretly in your spirit that bears astonishing fruit 51 years later. Such is the tale of Anne Swoyer, 59, of Mt. Airy, who takes apart owl pellets and uses the mouse bones in them to create vivid works of art. "I was bird watching at the Wildlife Refuge at Tinicum, probably with the Wyncote Audubon Society, when a member of the group stooped, picked up a dark brown owl pellet, handed it to me and said, 'This is what owls cough up hours after they've eaten. They don't digest bones, fur and feathers.'”

Intrigued by the pellet, Anne put it on her nature shelf alongside shells, seed pods, rocks and garnets, where it was to sit for months.

Anne stayed busy making a living. "I'm a freelance type of person," she said. "I can't tolerate a 9-to-5 routine." Work as a standardized patient, a position in which she poses as a patient for medical students, allows her the flexibility she desires.  "Essentially, I'm a fake patient who helps the students develop the skills they'll need once they begin treating real people," she said. "You have to be alert and provide honest and useful feedback for the students.

“You have to recall not only if the student took your blood pressure¸ but what his body language conveys," said Anne, who now trains other people to work as standardized patients. "For example, did the medical student knit his eyebrows when I, as a standardized patient, said that I smoked a pack a cigarettes a day.  That expression suggests judgment, something doctors want to avoid."

Although everyone involved knows that the scenarios aren't real, the situations presented somehow take on urgency. "Everyone works hard," Anne said. One especially tough task that future doctors practice with standardized patients is how to break bad news. "Say the student has to tell the patient that tests results show cancer. If students get stuck, they can stop the scene and ask their peers and their teacher for suggestions. I want to do all I can to prepare the students."

Anne's experience as a standardized patient helped prepare her to volunteer as a facilitator for Alternatives to Violence at Graterford Prison, a program in which inmates learn to communicate, cooperate and collaborate. "Both experiences have sharpened my own communication skills," she said.

In 1990, Anne's bird watching, walks along Wissahickon and making boxed collages brought back a memory from 51 years earlier. Anne's dad had taken her, her three sisters and brother to the Mutter Museum, known for its medical oddities.

"I opened a drawer there and saw the inner ear bones of animals ranging from a hummingbird to an elephant," she said. "I didn't realize how deeply that sight had embedded itself in me." Anne picked up an owl pellet five decades later and began arranging the bones it contained. "Owls are beautiful creatures, and they cough up this hairball full of bones. It's pretty fabulous."

During a gig at Weavers Way, first as a floor staff person and then in the prepared foods department, Anne was wearing a pin that consisted of a mouse mandible on a black background. Claudia Raab, who used to organize what became the Water Tower Craft Show, praised it. "Claudia told me, 'It's art!  It's an amazing piece,'" said Anne, who now sells the pins privately and at small craft shows.

Anne, who now buys owl pellets, used to collect them herself, an endeavor that led to adventures.  One day she saw a barn in Cumberland County, New Jersey, and poked her head in. After her eyes adjusted to the shadows, she saw owl pellets strewn over the floor. "I was reaching for some when three owls whooshed past my face and out of the barn to escape from me," she said.  "It felt like a spiritual moment, that I had been visited by these precious creatures. Plus the yield!  That barn was carpeted with pellets. I collected hundreds of them that day. It was like I'd died and gone to heaven."

Nor was that Anne's only exploit.  Four years ago, she and her husband, Bill Jacobsen, were saying goodbye to fellow travelers at the end of a trip Burundi in central Africa. "We were standing under an evergreen tree, and owl pellets were all over the ground. I smuggled some onto the plane and made some pieces with African shrew bones."

Making bone art is slow, meditative work.  "I sketch out what I want to do, then I use tweezers to place the bones," said Anne, who may apply to the Pennsylvania Guild of Craftsmen.

"I don't take orders to do this or that design because I don't know in advance what I'm going to make, and I never know what's going to be in a pellet," said Anne, who still finds time for Alternatives to Violence at Graterford Prison and to recruit people interested in volunteering .

Some people cringe at the very thought of bone art, Anne noted, but others go wild over the designs she conjures from the bones.  "It's not for everyone.  Some people are creeped out because bare bones mean death."

51 Marathons: Now that’s Something to Talk About!