Philadelphia NOW, Pennsylvania NOW and the Philadelphia Commission for Women sponsored a well-attended virtual Town Hall on HB 40, which would establish a U.S. congressional commission to study and … 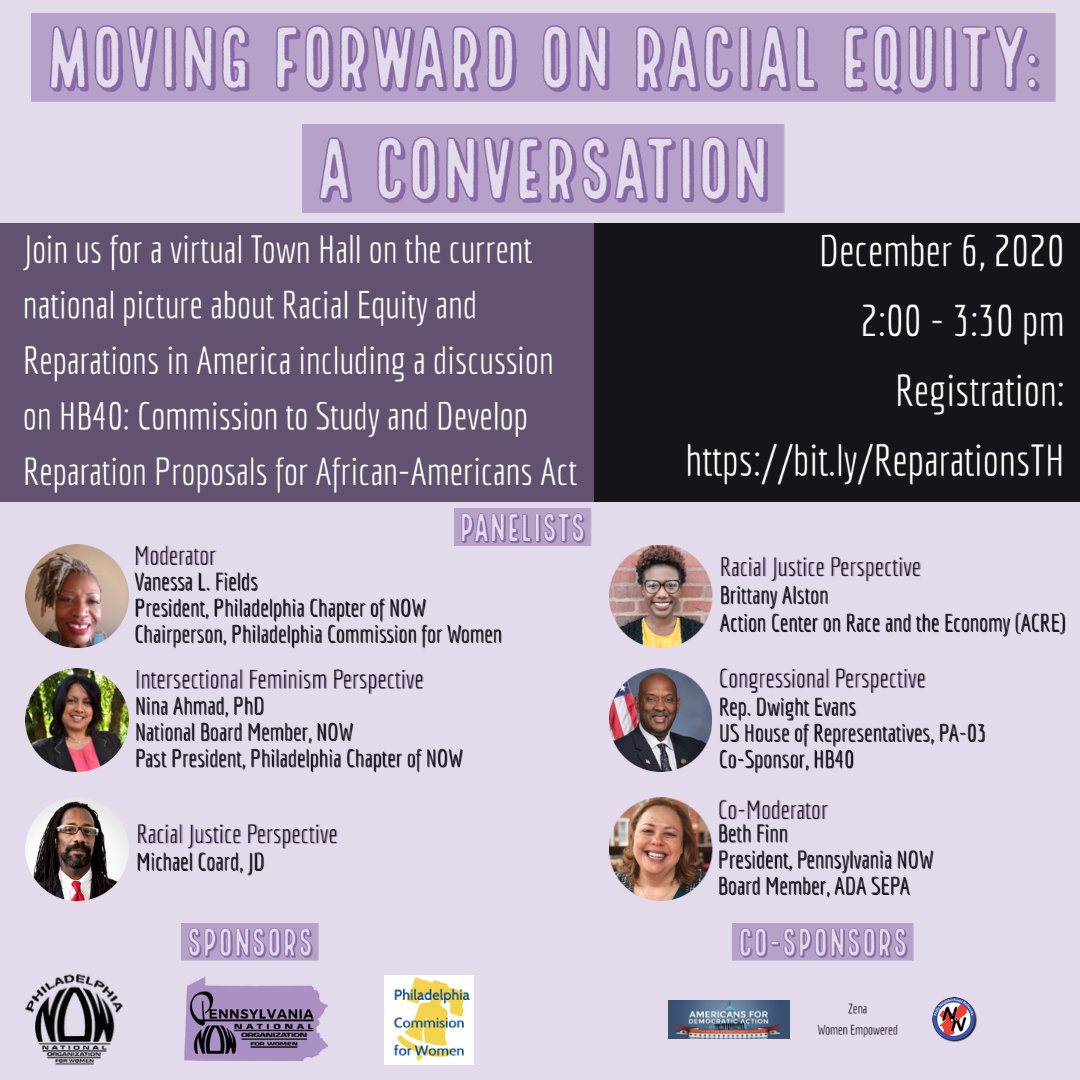 A promotional infographic for the Dec. 6 discussion of reparations.
Posted Thursday, December 17, 2020 11:07 am
by Karen Bojar

Philadelphia NOW, Pennsylvania NOW and the Philadelphia Commission for Women sponsored a well-attended Dec. 6 virtual Town Hall on HB 40, which would establish a U.S. congressional commission to study and develop proposals for reparations for African-Americans.

Former Philadelphia NOW President Nina Ahmad stated that no other group had endured the brutal treatment and history of unrelenting discrimination experienced by African-Americans.  She focused on the experience of slavery for African-American women and argued that the sexual violence and horror of having their children torn away must be part of the discussion about reparations.

Attorney and racial justice activist Michael Coard noted that HR 40 calls for a study and asked: “How can any reasonable person oppose that?”

The bill does not call for any specific form of reparations, which might take many forms, including direct payments to individuals, investments in black communities, new zoning practices, educational scholarships, and business loans.

Coard also noted that the debate about reparations recently moved to state capitols. PA Representative Chris Rabb introduced legislation that would award reparations to African American residents of Pennsylvania. Rabb’s bill would include tax and other benefits to eligible residents, not cash disbursements. To qualify, residents would have to provide government documentation verifying their ethnicity as Black/African-American.

Brittany Alston, a Research Director for the Action Center on Race and the Economy, focused on the impact of slavery and racial discrimination on the accumulation of wealth across the generations.  She argued for investment in supportive systems, and divestment from institutions harming Black people.

Congressman Dwight Evans noted that in recent years there has been some progress towards passage of HB 40, which was first introduced by the late Rep. John Conyers, D-Mich., in 1989; Conyers introduced it every year until he resigned in 2017.  The bill is currently sponsored by Rep. Sheila Jackson Lee, D-Texas, and has 173 co-sponsors to date, four of whom are come from Pennsylvania: Brendan Boyle, Madeleine Dean, Dwight Evans and Mary Gay Scanlon.

Evans noted that this year the House Judiciary Committee, for the first time, held a public hearing on reparations for slavery. He noted that also for the first time all the 2020 Democratic candidates for president pledged to sign HB 40 if the bill was passed by Congress.  Evans saw some possibility that HB 40 would come up for a vote within the next two years. The prospect for passage has dimmed as the Democrats have lost seats in the House, and control of the Senate is uncertain.  But the momentum is there.

Nina Ahmad noted that NOW, with its network of state and local affiliates, is well-positioned to organize its members to lobby their congresspersons to vote for passage of the bill. For more information about the struggle for reparations and the prospects for moving forward, please see further reading and resources, here. A petition in support of H.R.40 is located here.

“By passing H.B. 40, Congress can start a movement toward the national reckoning we need to bridge racial divides,” said Sheila Jackson Lee, the current sponsor of HB 4. “Reparations are ultimately about respect and reconciliation — and the hope that one day, all Americans can walk together toward a more just future.”