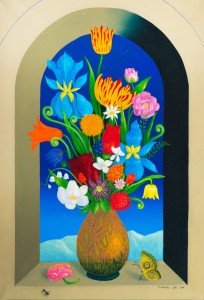 This Fall Woodmere Art Museum presents “We Speak: Black Artists in Philadelphia, 1920s–1970s.” The exhibition will feature over 70 paintings, photographs, sculptures and prints produces by black artists living and working in Philadelphia during the roughly 50-year period. “We Speak” examines a series of relationships in the arts while considering how artists supported each other and mentored subsequent generations. The exhibition will open on Sept. 26 and run through Jan. 24.

The exhibition was organized with direct input from artists and their family members, museum professionals, collectors, gallery owners and scholars in the form of 14 oral histories, which are transcribed in the exhibition's catalogue. The oral histories represent a process of discovery that shaped the checklist and thematic structure of the exhibition.

“We Speak” also explores how different institutions and organizations in Philadelphia either provided a platform for black artists to advance their careers or fell short of doing so. Among the many Philadelphia institutions that are part of the history presented include: the Graphic Arts Workshop of the Works Progress Administration; Barnes Foundation; Pyramid Club; Philadelphia Public Schools; Wharton Center and other settlement houses: Ile-Ife Black Humanitarian Center; National Conference of Artists; Brandywine Workshop; Afro-American Historical and Cultural Museum as well as Philadelphia’s academies, museums, universities, galleries and artist groups.

William Valerio, Director of Woodmere Art Museum, said, “Woodmere is the only museum able to bring to life an exhibition such as ‘We Speak’ because our mission is to tell the stories of the art and artists of Philadelphia. By taking a closer look at our collection, we discovered some thought-provoking connections between artists’ inspirations and ideas. We wanted to undertake the oral histories to learn more about the relationships and social contexts they shared. The artists included in the exhibition addressed matters of race and equality in many different ways, both implicitly and explicitly.”

The curatorial time frame of “We Speak” begins in the 1920s with Philadelphian Alain Locke's publication of “The Legacy of the Ancestral Arts” (1925), a seminal text in the New Negro Arts Movement, issuing a call to black artists to find inspiration in their African heritage. In the 1970s, questions of identity and culture were reframed by the social politics of the post-Civil Rights era and the black power movement. The nationwide bicentennial celebration also brought to the surface questions about progress toward freedom and equality.

Rachel McCay, Assistant Curator at Woodmere, organized the exhibition jointly with Susanna Gold, Guest Curator. McCay said, “The exhibition explores the many ongoing conversations in the arts that were resonant to black artists in Philadelphia during the time period, including questions of identity and gender, academic tradition, relationships within the urban fabric, exploration of abstraction and the influence of African culture.”

An illustrated catalogue accompanies the exhibition. A variety of programs, lectures, films, workshops and concerts will be offered through Jan. 24, 2016.

Some of the featured programming:

Housed in a 19th-century stone Victorian mansion on six acres in Chestnut Hill, Woodmere first opened its doors to the public in 1910. The building, grounds and core of the permanent collection are the gifts of Charles Knox Smith (1845 – 1916). Today, Woodmere’s collection consists of more than 5,000 works of art, telling the stories of the art and artists of Philadelphia.