New urban romance novel by local 'never give up' author

New urban romance novel by local 'never give up' author 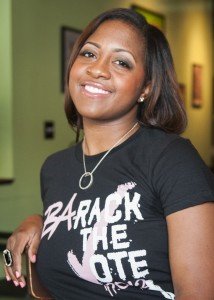 Anyone who watches any “reality” talent show on TV like “The Voice,” “So You Think You Can Dance,” “American Idol,” etc., has heard a version of this mantra delivered from judges to contestants: “Follow your dream! Believe in yourself! Do not give up, no matter how many rejections you receive!”

Mya Kay Douglas is one person who has followed that optimistic advice. After Mya Kay, 31, of Cheltenham, finished writing the novel, “A Song For Jordan,” in 2011, she received more than 60 rejections from various literary agents and publishers.

But then one bit. It was Sara Crowe of Harvey Klinger, which has represented New York Times best-selling children's authors. When Crowe eventually decided not to publish the novel, however, Mya Kay was still not deterred, even though she was laid off while writing her first novel, and three weeks later her mother was diagnosed with tongue cancer.

Eventually, Mya self-published “A Song for Jordan” and feels she has had a measure of success. “I would say altogether I probably sold about 300 copies,” she said last week. “To be honest, I am very proud of the marketing I did for it between the original song and the movie that was produced, I would say that book taught me how to be innovative with my marketing. So in that regards, it did well.”

And now Mya Kay, who has written freelance articles for the Local and is also currently enrolled in an accelerated 12- to 18-month MBA program at Philadelphia University, just debuted her first urban romance novel, “Concrete Stilettos: A Love Story,” under Royalty Publishing House on Oct. 17.

In “Concrete Stilettos” the novelist tells the story of Taz Green, a 17-year-old stripper who has tried to fill a void ever since her parents were murdered when she was 12. The spunky teenager finds herself loving the thrill of dancing and the male attention, but she still prays and attends church. After she meets Curran Kilman, a love interest, she realizes that life is taking her in a whole new positive direction, but the church will not let her forget her past. No matter how Taz tries to change her life around, she finds herself drowning in a sea of despair.

“I wrote it because it’s a story that needs to be told,” Mya Kay said. “The theme throughout this entire book is forgiveness, not just for others but for yourself. Everyone who tries something that society says is negative or wrong isn’t necessarily a broken person coming from a broken home. Some people try something and actually like it, no matter how bad it may be. Taz reminds me a lot of myself. I was looking for love and answers in places other than in myself, and God brought me back to Him every time.”

Mya Kay graduated from Philadelphia High School for Girls in 2002 and from Temple University with a degree in Magazine Journalism. While at Temple, Mya Kay also founded a mentoring organization, A Step into Sisterhood, and eventually created a male version, Brotherhood in Existence, the following year. “Sisterhood” mentored young people between the ages of 9 and 21. They worked closely with Grover Cleveland Elementary School and YouthBuild Charter School and helped several high school dropouts get their diplomas.

Mya Kay received her Master’s in English from Arcadia University in 2010. She relocated to Atlanta, Georgia, in November, 2011, to pursue a career in film and television but switched gears 10 months later and wound up teaching English in South Korea from August, 2012, to August, 2013. She has also self-published “Speechless: Short Stories” in June of 2012.

Award-winning actress Terri J. Vaughn of the Steve Harvey Show gave Mya Kay her first book signing and first book review. “Mya paints a very vivid and real life emotional picture with every sentence,” she wrote. “Her writing fills me with joy, fear, anger, anticipation and a host of other emotions that keep me reading on and rooting for her characters.”

In addition to novels, Mya Kay writes screenplays and owns and operates her own nail polish line, Empress by Mya Michele, as well as a writers' coaching agency. How does she find the time to do it all? “I'm very disciplined with my writing,” she said, “especially since I've now signed a contract with a publisher … My ultimate career goal is to have an empire of successful businesses, which includes being a mainstream published author, produced screenwriter and script consultant … ”