Tuba Skinny, a traditional New Orleans jazz band and YouTube sensation over the past 10 years, will be playing the Commodore Barry Club in Mt. Airy on Friday, Aug. 30. by Len Lear One of the … 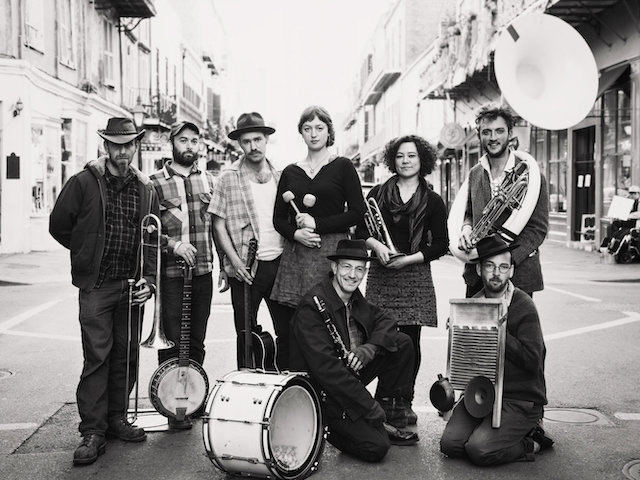 Tuba Skinny, a traditional New Orleans jazz band and YouTube sensation over the past 10 years, will be playing the Commodore Barry Club in Mt. Airy on Friday, Aug. 30.

One of the greatest musical thrills you can experience is seeing a Dixieland jazz combo playing on the streets of the French Quarter in New Orleans. If that music does not get your feet tapping and your body moving, make an appointment with a cardiologist. The essential elements of Dixieland are the traditional front lines consisting of trumpets, trombones and clarinets and ensemble improvisation over a two-beat rhythm.

In the 1940s Dixieland was on the descent, replaced by the then-new “bebop” sounds of brilliant improvisers like Charlie “Bird” Parker and John “Trane” Coltrane. Unfortunately, one rarely hears Dixieland anymore outside of New Orleans, but local music buffs are lucky because one of the country's greatest exponents of Dixieland, Tuba Skinny, will play the Commodore Barry Club, 6815 Emlen St. in Mt. Airy, on Friday, Aug. 30, 7:30 p.m.

Tuba Skinny, a traditional New Orleans jazz band, has gone from a local band playing for tips on the streets of NOLA to an international and YouTube sensation over the past 10 years. The band has performed on streets and stages around the world, including music festivals in Mexico, Sweden, Australia, Italy, France, Switzerland and Spain. In July they toured France before coming back to the U.S.

“We play a mix of old jazz and blues from the last century,” Robin Rapuzzi, band spokesperson and percussionist, said last week. “Usually 1920s music, but sometimes we like to throw in a little R & B. We travel down the east coast from Maine every summer. We often look for the best swimming holes and beaches and camping spots and collect old instruments along the way. I usually have washboards for sale.”

When asked about their strongest musical influences, Rapuzzi said, “Ma Rainey, Bull City Red, King Oliver and Victoria Spivey. We were inspired by African American blues, jazz and stringband music from the ‘20s and ‘30s, ‘50s and ‘60s, New Orleans parade culture and dive bars and rock piles across the planet. Railroad tracks.”

The band's name originated when Todd Burdick, their sousaphone player, was walking down the street one day, and someone said, "Hey! There goes that skinny tuba boy!" That was when members decided to run with the incident and named the band "Tuba Skinny."

Rapuzzi said the band’s favorite gigs have been “barn shows in upstate New York, a birthday party in the French countryside and at the restaurant LaBarrachaia in Italy.”

According to Clea Simon, of Offbeat magazine, “Still mining the early jazz, blues and ragtime that have made them local favorites, this New Orleans combo is not only reaching further into the archives but also polishing originals that fit nearly seamlessly into the catalogue.

“In tune after tune, the core instrumental ensemble nails the classic New Orleans contrapuntal collective improvisation, instantly evoking another era while at the same time delightfully of the moment.”

According to Pops Coffee, an octogenarian who writes for the Syncopated Times, “Tuba Skinny are surprisingly modest, unassuming people, having fun playing the music they love and scarcely aware of their own enormous talent. They present themselves in a laid-back, smart, casual manner. The gents wear baseball caps and on hot days play in singlets and shorts. The ladies have a penchant for short socks and flat shoes or trainers. So they have perfect looks for a New Orleans street band.

“They have built up a huge repertoire, mixing classics (especially rags and blues) with modern material. I have counted 327 different tunes played in videos, and there are doubtless more. This summer, even while touring in Europe, they were still introducing long-forgotten tunes. How different from the tired-sounding bands who play the same handful of pieces week after week!”

You can purchase tickets at PhilaUP.org. More details about the band at TubaSkinny.com. While they do not have an official channel, you can watch videos of their performances on YouTube by searching "Tuba Skinny."