A rendering of One West shows what developers expect the building will look like when it is completed. by Paula M. Riley “Take a look at Willy Penn.” That’s what Rob Lamb, Berkshire Hathaway … 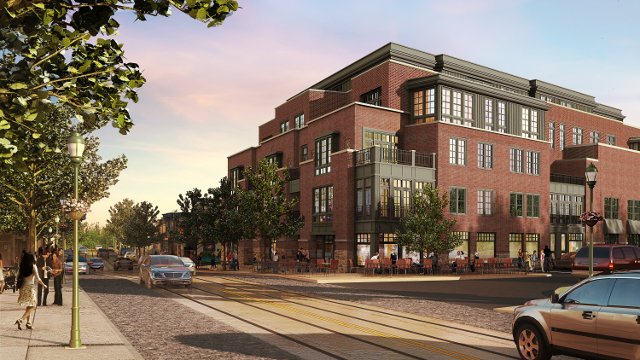 A rendering of One West shows what developers expect the building will look like when it is completed.

“Take a look at Willy Penn.”

That’s what Rob Lamb, Berkshire Hathaway Fox & Roach Realtors’ co-listing agent for One West Chestnut Hill, tells prospective buyers as they stand on the Penthouse 2 terrace. High above the hustle and bustle of Germantown Avenue, the penthouse’s three homes offer tree-top views of Pastorius Park and Center City’s skyline that include the statue of William Penn that stands atop the tower of City Hall.

One West is the name for the 20 residential properties above Fresh Market (opening later this year) located on the former Magarity Ford property at West Hartwell Lane and Germantown Avenue. Purchased and developed by Bowman Properties, One West residences occupy four floors and range in size from a one-bedroom with study (1,351 sq. ft.) to a four-bedroom with study (3,449 sq. ft) penthouse. The homes sell for between $875,000 and $2.5 million.

On a tour of One West, where general contractor Dale Corp. has completed the build-out and framing of the floor-to-ceiling windows, prospective buyers repeatedly ask, “Is this part also the terrace?” They were surprised to hear Lamb’s affirmative answers and learn that one of the penthouse’s terraces stretches 1,800 square feet.

Their perimeters wrapped with a green screen of planting beds, and often placed off the dining areas and master bedrooms, the terraces are as much a part of the living area as the building’s interiors.

“These terraces are so amazing that owners will use decorators for the terraces as much as they do for their living rooms,” said Bowman Properties owner Richard Snowden. One owner has already made arrangements for a reflecting pool to be added to the terrace.

"I wanted to move to a condo without giving up a gracious home,” said that buyer, Jean Wedgewood.

"These are going to be absolutely gorgeous,” she said. “It will feel as though I am still in a gracious home with high ceilings and fireplace."

Lamb says that Wedgewood's comments echo those of potential buyers.

"They want the large, elegant living space of their Chestnut Hill homes for entertaining purposes without all the bedrooms or maintenance," he said.

“It’s the same movement as what’s happening in Center City or in Passyunk,” he said. “People see that there is a significant investment being made into Chestnut Hill and they want to be part of this area’s vitality.”

The greatest benefit of One West, according to Lamb, is the impact it will have on the community.

“These people want to be part of a lively village,” he said. “They are choosing to invest their homes here and, like so many locals, these folks will contribute and support the community in a variety of ways.”

Prospective buyers are coming from all parts of the city and well beyond its limits. They’re interested in One West not only for the neighborhood but also for the building itself – a contemporary structure with features like an enclosed parking garage, multi-paned, seven-foot wooden windows and concrete floors.

“The trick with building a structure as large as this one is how to be a good neighbor and a quiet neighbor,” he said.

Since this is a mixed-use structure, designers worked to make the place as soundproof as possible. The windows and concrete floors contribute to this. Using concrete floors removes about 9 feet from the building’s original height, according to Snowden.

In addressing parking and potential congestion, every owner at One West has two parking spots in the underground garage. There is an enclosed delivery bay for the Market, and delivery hours are curtailed as per his contract with Fresh Market.

As part of the plan, West Hartwell Lane will change direction from westbound to eastbound and a traffic light will be added at this intersection. Thus, Market shoppers will enter the Market parking lot from Germantown Avenue, and exit around the rear of building, turning left (east) onto West Hartwell Lane.

“We wanted to make sure those cars were not going into the residential neighborhoods of Shawnee and others,” Snowden said.

For Snowden, part of being a good neighbor is respecting the historical integrity of the area. He cites the 3 to 6 feet of Wissahickon schist at the building’s base, the matching of the brick color to other local buildings and the real applied stucco as all features found in homes around the historic district.

"They selected and sought familiar and comfortable materials that harmonize with the streetscape,” she said. “Though it's new construction it's not jarring."

Masking the building’s size was one of their greatest challenges. Hours were spent at the design table to make it appear smaller and blend in the Avenue. Making a stepped building (wedding cake style), leveraging the property’s natural slope, selecting dark colors, and choosing specific build materials were efforts designers applied to produce this effect.

Snowden hopes that residents who are concerned about the size realize the intentions and resources that were dedicated to this design. During the initial planning phases, there was extensive community involvement by the Chestnut Hill Community Association and local neighbors who had concerns about the building’s size, use and neighbor considerations.

He hopes that those who remain concerned about the building will look to other development by Bowman Properties – such as Starbucks and J McLaughlin on Germantown Avenue – as examples of investing in the community, respecting its historical integrity and producing quality work.