Sean Williams and Jennifer Low stand proudly in the front of the Frosted Fox Cake Shop, which they just opened at 6511 Germantown Ave. (Photo by Susannah McLean) by Constance Garcia-Barrio French … 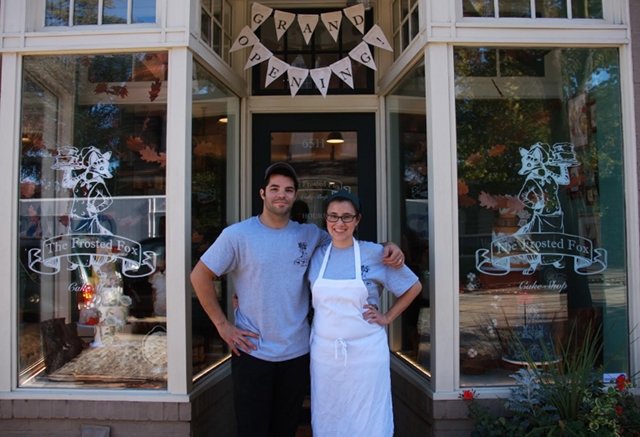 Sean Williams and Jennifer Low stand proudly in the front of the Frosted Fox Cake Shop, which they just opened at 6511 Germantown Ave. (Photo by Susannah McLean)

French writer Marcel Proust, who famously lived times past through the taste of little cakes, would have swooned at the feet of Sean Williams and Jennifer Low, owners of the Frosted Fox Cake Shop, newly opened at 6511 Germantown Ave. My first bite of their chocolate chip oatmeal cookie summoned memories of trolley rides to the bakery, story times with milk and cookies and my mom's warm, bustling Christmas kitchen.

Maybe that evocative power shouldn't have shocked me since Jennifer's gift for baking and some of her recipes are generations deep. "My great-grandmother, Lavenia Outwater, originally made those oatmeal cookies with chicken fat," said Jennifer, who started baking with her mother at age 3. "We use butter in all of our cookies now."

During middle school sleepovers at the Washington Lane home where she grew up, Jennifer and her friends would bake all night. The Germantown Friends School alumna took a cake mixer to Wesleyan University, where she earned a degree in Anthropology. "I continued to bake all the while," she said.

The Fates decreed that more than scrumptious cakes and pies would come from Jennifer's baking. In 2006 she met her future husband and business partner, Sean Williams, at the Culinary Institute of America in New York City, which trains students to become everything from executive chefs to food photographers.

"We met the first day of class and found we had a lot in common," said Sean, who majored in English and minored in business at the University of Florida. "We would study together. The program was two years long and included courses like 'Introduction to Gastronomy,' 'Hearth Breads and Rolls' and 'Confectionary Art and Special Occasion Cakes.'"

They interned together at Chatham Bars Inn, Chatham, Massachusetts. The late hours and high-stress restaurant kitchen soon had the pair dreaming of their own bakery. "It was a tough time for me," Jennifer said. "During the entire four months we only had four days off. I worked 5 a.m. to 5 p.m. most days, and Sean worked from 10 a.m. to 11 p.m."

Jennifer and Sean, now both 31, married in 2010. "We had fun doing our own wedding cake," said Jennifer of the five-tier cake topped with a fox bride and groom. "Foxes are smart, quick and adorable. We've dressed as foxes for Halloween, and the Frosted Fox name seemed right for our bake shop."

The flavors may have their roots in Sean's Miami upbringing. That city's culinary crazy quilt includes Caribbean, South American and Asian restaurants, etc. His hometown gives him a breadth of experience, yet he hopes to bring to Frosted Fox something Miami lacks. "Miami has big stores and franchises but no neighborhood shops that make specialty cakes," said Sean, whose parents and sister still live there.

The bake shop has several intimate spaces with tables and chairs. I dawdled over my cookie with a cup of jasmine tea. One can also enjoy a cup of coffee from nearby High Point Cafe. An open area allows visitors to watch Jennifer decorate cakes with surgical precision.

Sean and Jennifer pride themselves on making cakes from scratch, using premium ingredients like King Arthur flour and Barry Callebaut and Valrhona chocolates. "We make our own icing here," said Jennifer, whose years working at the Night Kitchen have stood her in good stead.

Jennifer has already become a recognized diva of cake decorating. TLC's show "Fabulous Cakes" featured her five-tier Earth Day cake while she was working at the Night Kitchen. The bottom layer has miniature sea creatures swimming in an aqua ocean followed by a tier showing a forest complete with pinpoint leaves on the trees.

The Earth Day cake is a marvel of patience and imagination, but so is my chocolate oatmeal cookie. I lick the crumbs off my palm and wonder at this treat's power to bring bygone days to life.

For more information about the Frosted Fox Bake Shop and for photos of some of the cakes, visit  www.frostedfoxcakeshop.com.