New ‘dad with AIDS’ novel based on Mt. Airyite's life

New ‘dad with AIDS’ novel based on Mt. Airyite's life 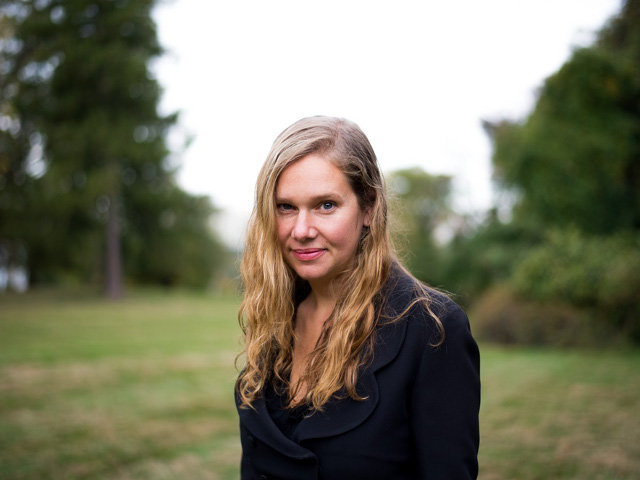 Mt. Airy resident Cordelia Jensen was in 9th grade in 1990 when she discovered that her father had contracted AIDS.

Mt. Airy resident Cordelia Jensen, 39, was in 9th grade in 1990 when she discovered that her father, whom she describes as "bisexual," had contracted AIDS. "I had been hearing my dad on the phone with all these doctors, so I asked my therapist. She said, 'Don't you know? He's HIV-positive.'"

Jensen has taken that tragic experience and turned it into art. Her Young Adult novel, "Skyscraping," written in verse, tells the story of 17-year-old Mira, who learns that her father is gay and dying of AIDS. The powerful story has been bought by Penguin Books, one of the nation's leading publishers, and is being released to the book-buying public on June 2.

Jensen, who has begun teaching a Writing for Children & Young Adults class at Bryn Mawr College, will have a launch party for the book on Saturday, June 6, 7 p.m., at Mt. Airy Read & Eat, 7141 Germantown Ave. (She will also have a launch in New York City on June 9 at McNally Jackson and another one in New York on June 20 at Books of Wonder.)

The book is already garnering very favorable attention. On the website Booklist, reviewer Jennifer Barnes wrote recently about the semi-biographical “Skyscraping”: “After walking in on her professor father and his teaching assistant James, both naked, Mira finds her world upturned: her parents’ marriage is open. Her father is gay. And his days are numbered, because his HIV is quickly turning into full-blown AIDS. In exquisite free-verse poems, Jensen traces Mira’s struggle as she drifts away from her family before being jerked back into their orbit ... but it’s Jensen’s stunning ability to bring the raw uncertainty of the AIDS crisis in the 1990s to vivid life that is so exceptional. Illuminating and deeply felt!”

In an earlier interview with the Local, Jensen described writing the novel as "healing." Working in fiction rather than memoir enabled her to explore — even to experience — alternative realities. As an example she pointed out that, while her own dad's sickness prevented him from attending her high school graduation, in "Skyscraping" Mira's father, although ill, comes to hers.

The passage of time also provided Jensen with the distance needed to write the novel. "It was easier to tell the story when I knew what the world was about," she explained. The title alludes to the novel's Manhattan setting. "There are no stars in New York City," Jensen pointed out, but the book contains a lot of "celestial imagery."

As a work of fiction, "Skyscraping" dates to January 2011, the start of Jensen's second semester at the Vermont College of Fine Arts, from which she earned an M.F.A. in Writing for Children and Young Adults. One of her teachers encouraged her ("Your poems are really strong") and suggested the verse novel form.

Verse novels, Jensen noted, "are really popular with teens." While some take the form of a continuous narrative, others, like "Skyscraping," consist of a series of poems. Jensen considers the mixed genre — poetry in a form traditionally reserved for prose — appropriate to both her subject matter and her audience. Like many Young Adult novels, "Skyscraping" is a coming-of-age story. The book's intended readers are neither children nor adults; like the verse novel, they fall somewhere "in between."

Because these novels tend to be short, Jensen had a complete manuscript when she finished her graduate work. On the strength of "Skyscraping," Sara Crowe of Harvey Klinger, Inc. agreed to represent her. The book sold in six months.

Jensen grew up in New York City. Interested in writing even "as a little girl," she has described herself as "a dedicated diary writer for many years" and clearly recalled the date of her first entry: Nov. 7, 1987. She attended Kenyon College, where she majored in English with a concentration in creative writing, specifically poetry. Some of the verses in "Skyscraping" date back to this time.

After graduation, however, Jensen opted not to pursue writing as a career, deciding "to work with kids" instead. Having spent a semester abroad in Ghana, she realized, "I wanted to interact with the world more; I didn't want to bury myself in books." In addition, working at Longacre Leadership, a community-building summer camp in central Pennsylvania, convinced her, "I had a lot to give back to teens." Jensen herself had attended the camp and describes her experiences as "grounding and helpful because of what was going on with my dad."

In 2004, she earned an M.Ed. in counseling from Shippensburg University. She moved to Philadelphia in 2008 and by then was married and the mother of two-year-old twins, Lily and Tate. About this time, Jensen got back into writing. She took classes with Minter Krotzer at the Big Blue Marble Bookstore as well as one in writing for children at the Mt. Airy Learning Tree.

In her LinkedIn profile, Jensen identifies herself not only as writer and teacher but also "bookseller." She currently teaches classes at the Big Blue Marble Bookstore in West Mt. Airy, and she just finished teaching after-school creative writing at Germantown Friends School.