Historian/author David W. Young, 55, a Germantown resident for 25 years, holds up a copy of his new book, “The Battles of Germantown: Effective Public History in America” (Temple University … 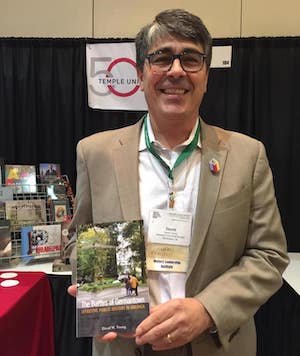 David Young may be a native of Chicago, but it is not likely that anyone on earth knows more about the community of Germantown, past and present, than David Young, 55, whose exhaustively researched book, “The Battles of Germantown: Effective Public History in America” (Temple University Press, published Sept. 20), examines what he calls “effective public history.”

Young told us that by “effective public history.” he means “the extension of one’s personal interest in the past (which can often be subjective and highly individualized) to a larger social context shaped by encounters with other peoples’ perspectives on the past. Imagine if we asked four people to make a mixtape or Spotify list of songs they associate with, for example, 1968 or the South or New York City. Each would have a list of songs that reveals as much about the person as about the topic … Effective public history is the process of learning from each other about other viewpoints as they relate to our own by listening to different reasons behind varieties of choices, challenging us to learn a new way of thinking on a topic, and discussing it together…

“As the late historian Ira Berlin wrote not long ago, ‘History is not what happened in the past, it is the arguments we have about what happened in the past.’ In other words, history is about the present, about us now, and how we construct our understanding of the past, sometimes through contention and conflict. But as the book shows, Germantown has many examples where such conflicts, or ‘battles,’ can be constructive.”

Young entered the world of public history by way of teaching high school history in Chicago, then at Ohio State University and locally as an adjunct history professor at Widener University, Peirce College, Temple University Center City and the former Philadelphia College of Textiles. More recently, he taught graduate students for many years in the graduate program in Historic Preservation at the University of Pennsylvania School of Design.

What is the relevance of Young’s new book for the average area resident?

“The book helps explain how meaningful the local history is in the Germantown Township, such as its connections to the Revolutionary War and the struggle for civil rights, and always has been. It also shows why and how the forces of preservation and public history haven’t always worked together or for the general good of the Township, which means the book helps to show how the neighborhood came to look like it does: a mix of historical beauty and misaligned planning efforts energized by passionate and prideful self-interest.”

In researching the book, what did the local historian discover that was most surprising or unexpected?

“The week-long event in April, 1928, that brought stellar figures of the Harlem Renaissance to Germantown surprised me and many others the most. It’s described in Chapter Two in the book, including the fact that it was so long forgotten that even local historians and other historic site directors refused to believe that it happened. And the fact that such a remarkable collaboration took place at all was only part of the surprise, because why it took place (to counter the active presence of the KKK in Germantown and Mt. Airy) was equally shocking to many people, including me.”

Why was it worth spending so much time exploring the history of Germantown?

“Germantown is America’s most historic neighborhood with resonant landmarks in the nation’s political, military, industrial, religious and cultural history. It is also the home of many important national initiatives in preservation and public history. The contradictions of the neighborhood are amazing to consider: juxtapositions between well-preserved buildings amid neglected properties; affluence next to poverty and blight; citizen historians who see decline and others who see opportunity.”

What individual in the history of Germantown impressed Young the most?

“J. Gordon Baugh, who was the owner of a small business, newly arrived in Germantown during the Great Migration, who took a camera around the neighborhood in 1913 to photograph the African American community: the institutions, shops, churches, schools and residences where people lived and worked, all to commemorate the 50th anniversary of the Emancipation Proclamation … He put black people into Germantown’s historical narrative. Seems easy now to walk around taking pictures, but think of how bold it must have been to carry around a wobbly tripod to photograph one’s neighbors and neighborhood landmarks. Baugh showed how people were finding a place in Germantown, something I admired because I found my own place in Germantown, too.”

For more information, visit TUPress.Temple.edu. Len Lear can be reached at lenlear@chestnuthilllocal.com

'From Schlub to Stud' author at Mt. Airy Zoom event

Mt. Airy author to discuss her work at Zoom event