As the newest artists-in-residence for the Presbyterian Church of Chestnut Hill, the Fairmount String Quartet will make its inaugural performance on Oct. 20 at 7:30 p.m. in the church's Cruikshank …

Posted Wednesday, October 10, 2018 2:20 pm
As the newest artists-in-residence for the Presbyterian Church of Chestnut Hill, the Fairmount String Quartet will make its inaugural performance on Oct. 20 at 7:30 p.m. in the church's Cruikshank Burleigh Memorial Chapel. (Photo courtesy of Beth Dzwil)

The Presbyterian Church of Chestnut Hill has announced the appointment of the Fairmount String Quartet as artists-in-residence. The ensemble’s inaugural performance is scheduled for Saturday, Oct. 20, at 7:30 p.m. in PCCH’s Cruikshank Burleigh Memorial Chapel.

The Fairmount String Quartet is comprised of violinists Rachel Segal and Leah Kim, violist Beth Dzwil and cellist Mimi Morris Kim. The ensemble has played an active part in the local chamber music scene since 1984. Its mission includes a dedication to bringing the intimacy and vitality of music to diverse audiences and making education a part of that mission. A special focus of the Fairmount Quartet’s performances has been young people and others who are unfamiliar with classical music. Their repertoire boasts both portions of the standard repertoire and works by under-represented composers.

Segal is a Philadelphia native who attended the University of Michigan and Yale School of Music. She is the associate director of the Philadelphia Young Musicians Orchestra. Kim is originally from South Korea. She studied at the Juilliard School in New York City, Peabody Institute of Music of the Johns Hopkins University in Baltimore and the National Conservatory of France. She is the director of music at Villa Maria Academy High School and the director of the Pennsylvania Youth Orchestra.

Dzwil, director of Fairmount Strings, is a Wyndmoor resident. Originally from Yew York State, she came to Philadelphia to study with Philadelphia Orchestra principal violist Joseph de Pasquale at the Philadelphia College of the Performing Arts. She teaches at Germantown Friends School, Community College of Philadelphia, Villa Maria Academy and is an adjunct at Springside Chestnut Hill Academy. Morris-Kim grew up in Haddonfield, NJ. She holds degrees from Rice University, the University of Minnesota and the University of Michigan.

Recalling how the four players initially came together as a quartet, Kim said, “Music and personalities brought us together. I love making music with the people I love being with.”

Dzwil added, “Chamber music became a passion as soon as I was introduced to it in high school. I took every chamber music opportunity that came to me in college and never thought I would be lucky enough to spend my life playing quartets.”

Segal explained, “Mimi (Morris-Kim) and I began our musical friendship in the summer of 1988 at a music camp called ‘Music in The Mountains’ and were both part of the Philadelphia Youth Orchestra. We reconnected in 2000 at the University of Michigan as members of the Graduate String Quartet, and again when I moved back to Philadelphia 2014. We are so happy to get to continue our 30-year musical journey together as members of the Fairmount String Quartet.”

Morris-Kim said, “I came to the group because of my relationship with Rachel Segal. We have known each other for more than 30 years and even played together in the Graduate Quartet at the University of Michigan. Rachel told me that the cello position of the Fairmount had opened and I eagerly auditioned.”

Dzwil expanded on the ensemble’s approach by saying, “Our free admission policy is meant to encourage those who might not be able to afford concert tickets but who wish to attend. We suggest a donation of $25 for adults, $5 for students, but do not pressure anyone to donate. We welcome children and tell parents not to feel embarrassed about leaving at intermission. We give some information about the pieces and their composers before we perform so that those without a background in classical music can have a greater understanding and enjoyment of those works.”

Following the “Harmony for Humanity” concert set for Oct. 20 at 7:30 p.m., the Fairmount’s residency at PCCH includes the ensemble taking part in the All Souls Day service Sunday, Nov. 4, 10 a.m.; pianist Ken Lovett (the Church’s organist) joining the Quartet Feb. 24, 3 p.m., in the Sanctuary; playing as part of the congregation’s Festival of Music and Arts Sunday, April 7, 4 p.m.; and their own recital Friday, April 26, 8 p.m.

Erik Meyer and the Choir of the Episcopal Church of St. Martin-in-the-Fields, Chestnut Hill, led the parish’s first Choral Evensong of the season Sunday, Oct. 7. The program of music included Edward John Hopkins’ setting of Psalm 26, Herbert Murrill’s setting of the traditional “Magnificat” and “Nunc Dimittis” and William Dawson’s arrangement of the spiritual “Ezekiel saw the wheel” at the Offertory.

Although Murrill’s choral settings of the “Magnificat” and “Nunc Dimittis,” taken from the ancient Roman liturgies of Vespers and Compline, aren’t especially inventive, they do effectively project the exuberance of the text of the former and the autumnal reflection of the latter. Both were sung with conviction and polish.

St. Martin’s will mark the ancient feasts of All Saints and All Souls, Nov. 1 & 2, with a performance of Wolfgang Amadeus Mozart’s Requiem Mass Sunday, Nov. 4, 5 p.m. Visit www.stmartinec.org 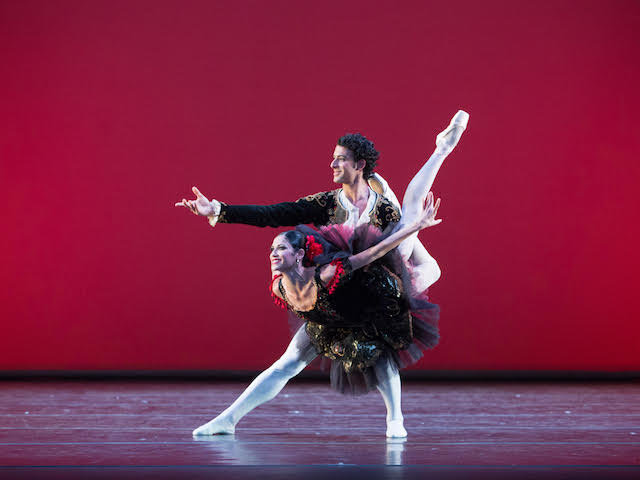 Arian Molina Soca and Mayara Pinera, seen here rehearsing for "Don Quixote," will be playing the roles of Romeo and Juliet, respectively, in the Pennsylvania Ballet's season-opening performance, running from Oct. 11-21. (Photo by Alexander Iziliaev)

Pennsylvania Ballet opens its 2018-19 season Oct. 11-21 with an extravagant production of “Romeo and Juliet.” Sir Kenneth Macmillan’s dazzling choreography, set to Sergei Prokofiev’s masterpiece of a score, brings William Shakespeare’s tragic love story to life with narrative concision and visual flair. The ballet will be performed within the spectacular Victorian beauty of the Academy of Music.

I had the chance to sit in on a rehearsal of the opening act “pas de deux.” It was led by balletmaster Charles Askegard with Mayara Pinera in the role of Juliet — delicate as a dream of romance — and Arian Molina Soca as Romeo, dashing as a silent film matinee idol. Watching two such superb dancers as Pinera and Molina Soca being coached by so meticulous a master as Askegard made it more than apparent that fine ballet dancing is truly a matter of inches in its movements and gestures. No less important for the dancers is their commitment to the characters of their roles.

Commenting on opening the season with “Romeo and Juliet,” artistic director Angel Corella said that he wanted to do so with a ballet that was romantic, big and bold and that “Romeo and Juliet” fit the bill. He also mentioned that when he was still dancing with companies such as the American Ballet Theatre in New York City, he had performed in the ballet.

Corella pointed out that in certain town square scenes Macmillan’s choreography calls for as many as 70 dancers onstage. “We’ll be calling on every dancer in the company for this production plus Ballet II (the company’s apprentice ensemble).”

Expanding on the ballet’s demands, he said, “It’s difficult for Juliet, of course, but it’s even more demanding on the men because they have to do everything from partnering to their own solos and ensembles, including sword fighting. By the end of the ballet, it feels like you’ve run a marathon both physically and emotionally.”

You can contact NOTEWORTHY at Michael-caruso@comcast.net. To read more of NOTEWORTHY, visit www.chestnuthilllocal.com/Arts/Noteworthy