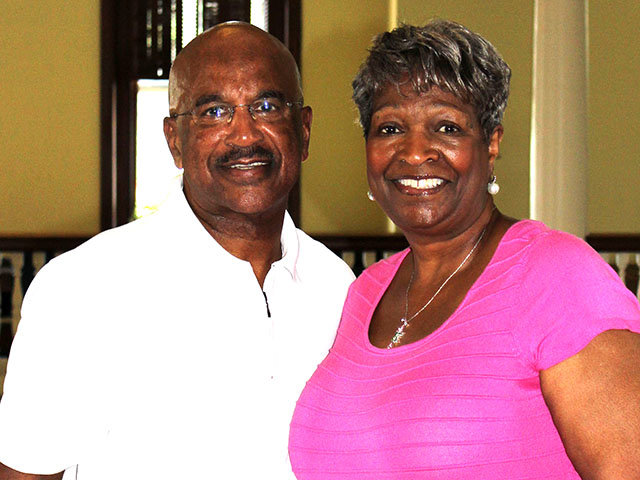 Garfield Jackson, a 2004 graduate of Chestnut Hill College (CHC), and Doris Jackson, a 2008 CHC graduate, both of whom are 70 years old, like to say they did it “backwards.”

When Garfield Jackson, who was in the School of Professional & Continuing Studies (SCPS), human resources and management, chose to return to school in his late 50s, he did so because of his two sons. Four years later, it was Garfield’s experience that led his wife, Doris, to choose CHC’s School of Continuing & Professional Studies as well.

Garfield, whose degree helped him obtain his current position as manager of partnership development and recruitment with Big Brothers Big Sisters, Independence Region, entered CHC with 29 accepted credits, making his decision to return that much easier.

“It was my responsibility to get a job and be able to provide for the family,” he says about the fact that no one suggested he go to college when he was young. “I never envisioned graduating from college because it wasn’t something that was passed down to me.”

Following his service in Vietnam, Garfield began his collegiate career on the GI Bill, but it wasn’t until many years later, influenced by his sons’ desire to see their father finish his education, that he became serious about going back.

“Chestnut Hill’s program offered me the flexibility and a comfortable atmosphere so that I could get a degree while working at the same time,” he says. “It was a great experience.”

During that time, Doris, who had spent many years working in the Methacton School District, held down the fort at home, waiting until Garfield graduated to pursue her own dream of a college education and of becoming a school teacher.

“The theme, ‘It’s my turn now,’ kept me motivated during my time here,” Doris remembers. “I had gotten the kids through what they needed to graduate and then Garfield got his degree. Everyone was telling me I had a knack for teaching and needed to go for education. The choice was simple.”

The couple, who now live in an over-55 development in North Wales (Doris is originally from Florence, South Carolina, and Garfield is from Philly), shared some of the same professors, had some of the same classes and even exchanged notes as they helped each other complete their education. And when Doris earned her BS in education, becoming the final member of her family to graduate, the emotions were overwhelming.

“Our sons were so happy and proud of us and so supportive,” Doris says. “And I was proud of myself, knowing I was able to get my degree, something I never imagined, and bring home that diploma with my name on it. It’s just indescribable.”

“You always want to be the first in your family to get that degree,” Garfield smiles. “We just so happened to do it backwards.”