Donald Nally and The Crossing made a triumphant return to in-person performance Saturday, September 11., at St. Paul’s Episcopal Church, Chestnut Hill. And St. Paul's will present its first Choral Evensong of the season Sunday, Sept. 26, at 5 p.m. 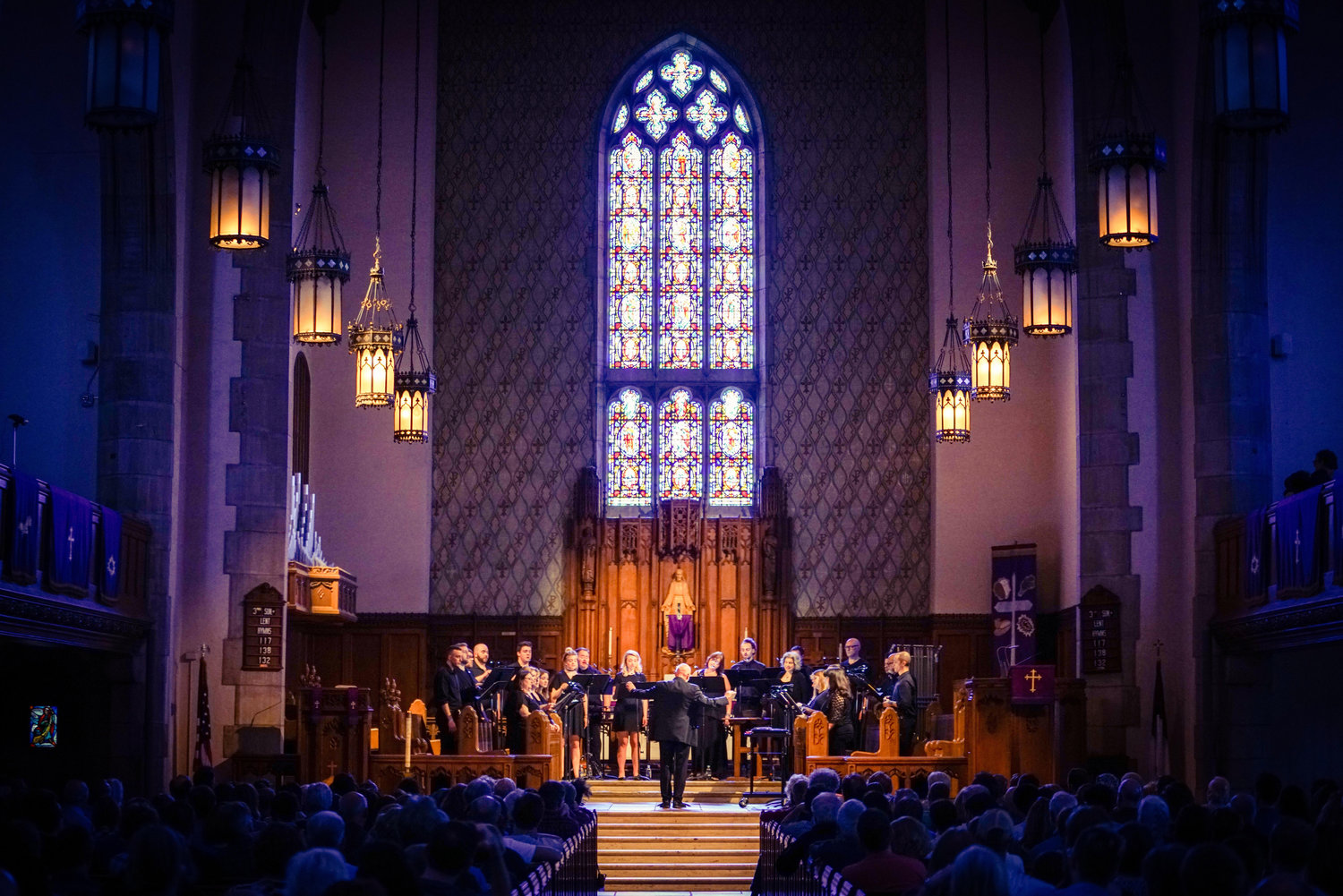 “Returning” was performed before an audience of nearly 300 devoted and ecstatic fans in the Presbyterian Church of Chestnut Hill. (Photo by Christian Stewart)
Posted Friday, September 24, 2021 8:00 am
by Michael Caruso

Donald Nally and The Crossing made a triumphant return to in-person performance Saturday, September 11. The concert was appropriately entitled “Returning” and it was sung and played before an audience of nearly 300 devoted and ecstatic fans in the Presbyterian Church of Chestnut Hill.

For those of us who have missed in-person music-making, “Returning” dispelled the dark clouds of isolation with the visceral impact of hearing great music performed with passion and integrity – right there in the same room.

Saturday evening’s program was even more varied than is the usual custom for Nally and The Crossing. Not only was there a broad spectrum of modern and contemporary works from famous and not-so-well-known living or recently deceased composers, but there were two selections from a musician who represents the finest in traditional choral music.

In several instances, a single individual was responsible for both the words and the music. Ayanna Woods (b. 1992) wrote both the text and score of “Shift.” Michael Gordon (b. 1956) composed both words and music for “Travel Guide to Nicaragua.”

In other cases, the composer made use of a traditional text. John Tavener (19944-2013) set the liturgy of the burial service for a Russian Orthodox priest for his “Funeral Ikos.” For his “Mass for the Day of St. Thomas Didymus,” James Primosch (1956-2021) paired the texts of the “Gloria” and “Agnus dei” movements of the Ordinary of the Traditional Latin Mass of the Holy Catholic and Apostolic Church of Christ at Rome with newly written words by Denise Levertov (1923-1997).

“Returning” featured a score by Michael Gilbertson (b. 1987) to a text by Kai Hoffman-Krull (b. 1985).  Eriks Esenvalds used the words from a North American Ute prayer for his “Earth Teach Me Quiet.”  And the great Charles Hubert Hastings Parry (1848-1918) relied upon the poetry of John Greenleaf Whittier for the text of “Dear Lord and Father of Mankind” and the concert’s sole encore, the coronation anthem “I Was Glad When They Said Unto Me.”

The evening’s most intriguing work was “Funeral Ikos.” Though English born-and-bred, Tavener became a member of the Holy Orthodox Catholic and Apostolic Church of Christ at Moscow. Throughout his composing career, his sacred choral music has consistently combined the traditions of the unaccompanied Slavonic chant melodies of Russian Orthodoxy with his own supremely beautiful contemporary harmonies. Adapting his own distinctive sense of rhythm to the un-measured flow of Russian chants, his scores often establish an aural universe that is other worldly in its transcendent spirituality. Nally and The Crossing caught both the serenity and the passion of “Funeral Ikos” in singing of sublime tonal beauty, flawless pitch and tuning, and an ethereal sustaining of the long phrases.

Primosch’s inventive blending of modern English with traditional Latin produced a seamless texture of bracing yet glowing music in “Music for the Day of St. Thomas Didymus.”. Nally and The Crossing sang it with a level of immaculate blend and balance that was unique yet expected from these musicians.

While evoking a transfixing sense of African chant, Woods’ “Shift” set a hypnotic tonal language that enveloped the audience. Gordon’s “Travel Guide to Nicaragua” is jagged, abrupt, canonic, multi-leveled – and beautiful. It was performed with precision and polish.

And what can one write about the two Parry anthems? They are part of the enduring legacy of the 19th century Anglo-Catholic movement that arose at Oxford University. It struggled mightily to bring the Church of England back into the fold of the Roman Catholic Pontiff. Even though the effort didn’t bear fruit, it did leave behind a repertoire that is overflowing with stunning choral masterpieces. With the peerless contribution of Scott Dettra at Chestnut Hill Presbyterian Church’s glorious Mander pipe organ, Nally and The Crossing literally shook the rafters.

Nally and his choristers will return to Chestnut Hill for “The Crossing @ Christmas” with a program entitled “Carols After a Plague” Sunday, Dec. 19, at 5 p.m. in the Presbyterian Church of Chestnut Hill. For more information visit www.crossingchoir.com.