Musician: No such thing as 'mistake-free performance'

Michal Schmidt, a native of Israel, is an acclaimed pianist/cellist who will be performing a program of Russian composers on April 18. (See article for location.) by Len Lear Michal Schmidt, 57, was …

Musician: No such thing as 'mistake-free performance' 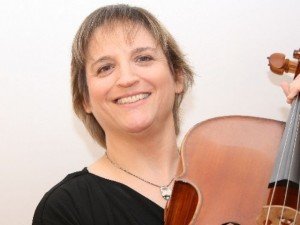 Michal Schmidt, a native of Israel, is an acclaimed pianist/cellist who will be performing a program of Russian composers on April 18. (See article for location.)

Michal Schmidt, 57, was born in Israel and lived there until she was 20. The brilliant classical pianist and cellist now lives in Wynnewood, but she is well known by many music lovers in Northwest Philadelphia and Wyndmoor. Her son, Giora, was a student at Germantown Friends as a middle schooler (1995-1997), and she performed often at GFS during that time. She has students in Wyndmoor and a chamber group there that she coaches. She has often performed the music of Peggy Garwood, a Wyndmoor resident, and she has a long history of working with Jan Krzywicki, another Wyndmoor musician. She has also performed at the Germantown Jewish Center in Mt. Airy and at The Settlement Music school/Germantown Branch. She has several upcoming concerts in the area, which are listed at the end of this article.

When did you come to the U.S.?

I came to the U.S. in 1978 to continue my studies after I finished my Diploma work at the Royal Academy of Music in London.

How did you wind up in the Philadelphia area?

My mother, who lives in Israel but was born in NYC, always told me to keep an eye out for the Curtis Institute of Music. “It’s the best, and it’s free,” she said. So when I applied and was accepted (on both instruments), I came to Philadelphia.

Did you always want to be a classical musician since childhood?

I know that at age 3 I fell in love with the piano. (My mom always told me I was searching for notes on the keyboard.)

Is anyone else in your family a musician?

Both my parents are avid classical music lovers. My mother studied piano seriously during her young years in NYC and later taught music and piano in Israel for many years. My father, who is 96 (and still goes to concerts), used to play a little cello and flute. All my five siblings played instruments at some point, but I am the only one who became a professional musician.

To a lay person like myself, a performance of a particular piece of music by a great musician always sounds the same. Are there any differences when you play the same piece of music on different occasions? If so, what are they, and why are they different?

Performances vary from concert to concert. It depends on how one feels physically, the vibe one gets from the audience, the lighting on stage, the temperature in the room, acoustics, etc. A performance can have a good buzz and inspiration in it, or be solid but not too exciting. I opt to strive for the first kind!

Has your goal ever been to play in a major symphony orchestra? (I know you were the principal cellist for the Chamber Orchestra of Philadelphia.)

Years ago I tried a couple of auditions but did not get past the final stage. It was never a singular goal, a “must,” so I did not go on to take 30 or more auditions, no matter where, just in order to get a seat in an orchestra. I tried for a few major orchestras but then continued to create my own path without that kind of a job. I did play in the orchestra of the Philadelphia Opera for more than 20 years.

How many hours of practice and rehearsal does it take before you finally feel confident that you can play a solo performance virtually mistake-free?

There is no “mistake-free” performance. We strive for perfection but it can only be achieved in recordings, when one can go back and fix mistakes. But depending on the piece of music, its length and level of technical difficulty, bringing a piece to “performance level” can take me from a few weeks to a year or sometimes more. Rehearsals with a colleague take much shorter than that because each of the participants takes care of their individual preparation first!

Do you still have to play every day to stay sharp? How many hours on a typical day?

Yes; I practice every day! I do take some time off but not very long. I practice both piano and cello regularly. it can take from 3-5 hours daily, sometimes more, if I don’t have anything else on the calendar that day.

How difficult is it to make a decent living if you are not a member of a major symphony orchestra?

VERY difficult! One has to have a hand in different “pots.” Classical musicians always teach, perform, take part in groups or solo projects, etc.

Are your three children and husband musicians?

My son, Giora, is 32. It's worth finding him on his website and his Facebook page of almost 70,000 followers. He is a fabulous violinist, Juilliard graduate and seasoned soloist. My daughter, Daphna, 26, is a trumpet player and now is in graduate school to get certified to teach music in school. Abigail, 20, is a terrific singer and cellist, but she is a sophomore majoring in Communications and Public Relations at Temple University. She is a member of the all girl a cappella group at Temple called “Singchronize.” Dov Schmidt is my husband of many years. We met as youngsters at the Haifa Youth Symphony. He studied violin and conducting in London, and I joined him there after he received a British Council Scholarship to study at the Royal Academy. He still teaches violin but mostly works as a violin-maker.

Do you miss Israel? Are other family members (parents, siblings, etc.) still living there?

We have a large family in Israel. We miss them, and it's not easy being far away, especially as our parents are aging. But we visit at least once and sometimes twice a year, and have very strong contact with everyone on a daily basis. Both my daughters did “gap-year” programs in Israel after they graduated from high school.

Where are you currently teaching?

I have students at Haverford, Bryn Mawr and Swarthmore Colleges and the U of P? I teach cello lessons as well as coach chamber music.

What are your goals for the future?

I am currently involved with two summer festivals. I would like to do more high level teaching and performing during the summers. That means more networking and finding ways to get connected to the people who run festivals (not an easy task). I recently completed a recording of some repertoire for students. I would like to do more of those. Tiadam Trio, my group in Israel (three of us are old friends from our college days), is preparing for another tour of concerts in Israel, probably for Spring of 2016.