Images of Mt. Airy's Day may stay with you for years

Eleanor Day's almost photographic, brightly colored representations of people and nature scenes evoke such powerful emotions, one almost feels they should be paired with the poems of Wordsworth, Shelley and Keats.

Images of Mt. Airy's Day may stay with you for years 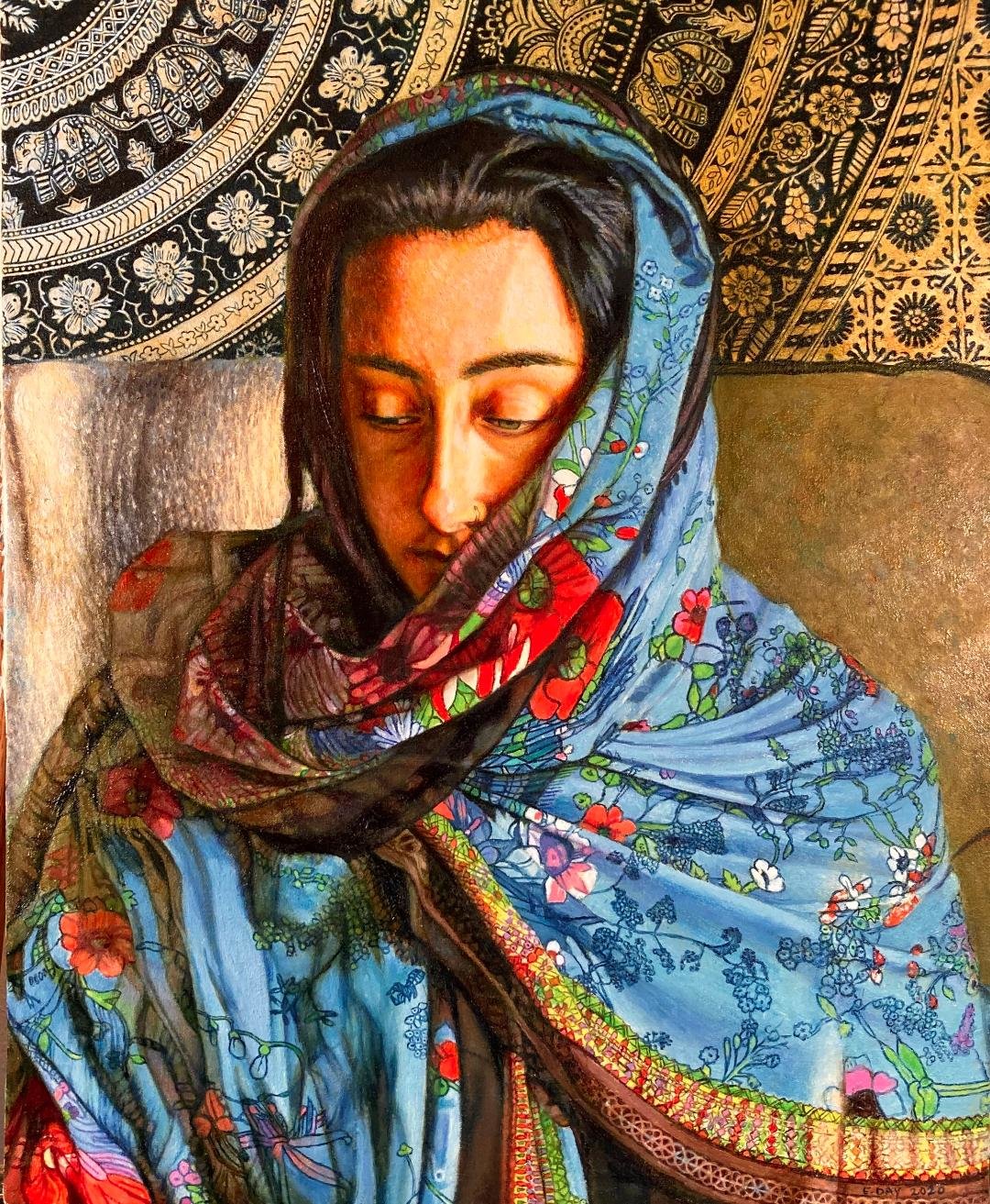 “Young Woman in a Head Scarf,” oil on canvas, by Eleanor Day. 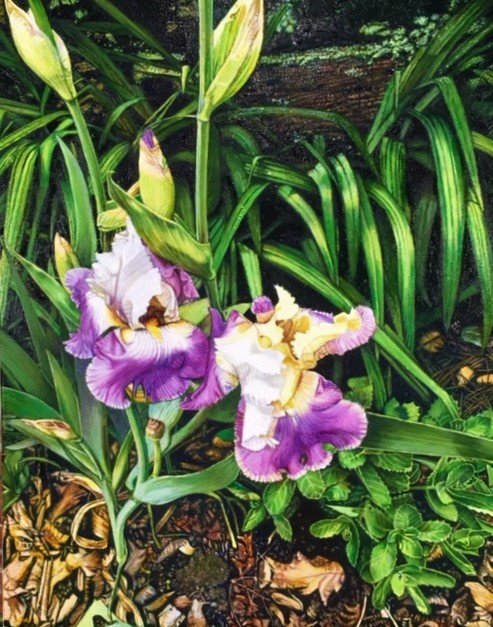 “After my parents' deaths,” said Day, “I became strongly aware of my own mortality and aging, and I took the leap back into painting full-time.” This is her “Irises.”
Previous Next
Posted Wednesday, March 24, 2021 11:09 am
by Len Lear

I could not help notice when passing Borrelli's Chestnut Hill Gallery, One E. Gravers Lane, that they are currently exhibiting the works of Mt. Airy artist Eleanor Day (and other artists), one of my favorite local artists who is as interesting as she is talented. Her almost photographic, brightly colored representations of people and nature scenes evoke such powerful emotions, one almost feels they should be paired with the poems of Wordsworth, Shelley and Keats.

A native of Philly's Logan neighborhood, Day was a member of the first graduating class of the Philadelphia High School for the Creative and Performing Arts (CAPA) in 1980. After graduating from CAPA, Eleanor spent the summer in Europe working as a nanny for a friend’s family. They lived in Paris and then traveled by car through Germany, Italy, Switzerland and Holland. During her travels, she visited as many museums as she could.
When she returned home, Eleanor attended the Pennsylvania Academy of the Fine Arts and graduated in 1984 with a degree in painting. She returned to Europe on her own and traveled from city to city to see the works of her favorite artists. Now 57, Day said last week, “It’s now been 20 years since I moved to Mt. Airy with my two young daughters and soon-to-be husband. The five- or six-year span of experiencing both of my parents’ decline and ultimate deaths in 2017 with Alzheimers had a major influence on the arc of my life as a painter.

“For those years, I had been emotionally and literally occupied with their care and parenting my teenage daughters. Painting had to be marginalized for me, and I took on more financially secure work minding children. After my parents' deaths, I became strongly aware of my own mortality and aging, and I took the leap back into painting full-time.”

Day has exhibited mostly locally since 2016, including the Annual Small Oils and Art of the Flower exhibits at the Philadelphia Sketch Club and The Cheltenham Art Center’s Painting Show. In 2020 her work was included in a show based on the figure at the Third Street Gallery in Old City and at the PAFA Alumni Show at Borrelli’s Chestnut Hill Gallery. “The opening of that show was the last social gathering I attended exactly one year ago before the pandemic became an inescapable reality.”

Day's work has won numerous awards over the years such as First Prize and Best of Show for her painting Dahlia #1 in an exhibit at the Philadelphia Sketch Club and the Juror Prize for “Injured Bird” at a Cheltenham Art Center Show.

“The hardest thing I’ve done,” she said, “is to pursue my painting despite all the obstacles my life has thrown in the way and to dig deep to find the confidence every day to continue making art and the courage to make myself vulnerable to both praise and criticism. I’ve had some difficult hurdles, but one of the hardest was when I had to escape an abusive relationship in a foreign country with a baby and toddler in tow. I’ve tapped into this experience in a few of my paintings.

“My primary ambition is just to be able to paint and to earn enough to contribute to my family’s financial needs with what I do, but of course, beyond that, I think most artists hope to be able to reach other people for whom one’s work resonates. It’s the artist’s job to express that which cannot be felt through words or other media for the community one’s work reaches.

“My husband, Joe, and I have fared better than so many people so far through this pandemic. It didn’t alter my daily routine of working at my home studio, but I was affected like everyone else on an anxiety-triggering emotional level which made it difficult to paint initially. I withdrew from entering exhibits although they were taking place virtually and online ...  I’m looking forward to the re-opening of galleries, entering shows and seeing my fellow artists and their work again. I look forward to seeing my daughters, who don’t live with us, a lot more, hugging them and seeing their young lives resume under more normal circumstances.

“I’ve always been most drawn to painting the figure, although I enjoy depicting the plant and animal world, too. There’s an endless variety of form and color in the plant world, and as an animal lover, I appreciate the beauty and mystery of all the species. But I relate directly to the figure as a means of expressing myself. My favorite paintings to make incorporate all three subjects.”

Day's strongest early influence was her older sister, Mary, also an artist. Another major influence was a high school art teacher at CAPA, Phillip Corey, who taught a painting technique that influences the way she paint to this day. When asked what historical figure she would mist like to meet, Day mentioned Violet Oakley. “She was a painter who at one time lived in a house that’s within walking distance of my home in Mt. Airy. In fact, there’s a historical marker there on St. George’s Road. “She accomplished so much as an artist and at a time when women were generally not taken seriously as artists.”