Germantown wine expert Rodney Chonka is seen here with Portuguese wines, which he feels offer excellent value for the money. (Photo by Louise E. Wright) by Len Lear If you are a wine buff but … 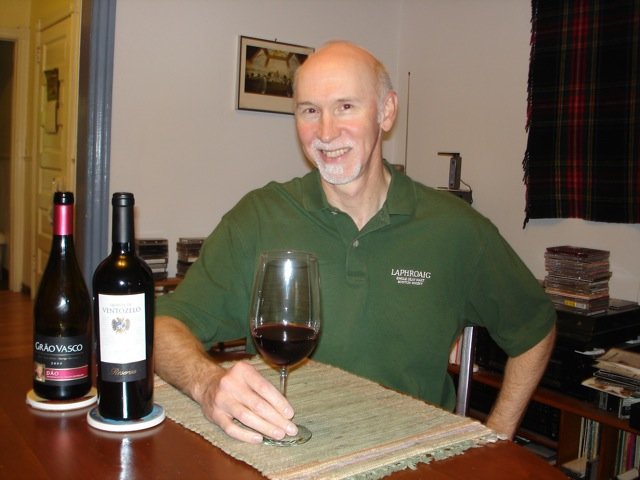 If you are a wine buff but you’re not fond of the huge markups, perhaps 300 to 400 percent, that many restaurants charge both by the glass and by the bottle, you are not alone. Rodney Chonka, who has forgotten more about wine than most of us will ever know, feels your pain. He knows that your grape expectations may be betrayed by the exorbitant prices.

“It’s very frustrating,” he said last week. “I read lots of restaurant reviews that tout their wine lists, and then when I check out the bottle prices, there’s virtually nothing under $60 or more. Even the price by the glass is often $12 and up.

“Your best bet is to look for happy hour specials, although these wines are usually the mediocre ones, or else go to your favorite BYOB. I rarely see anyone buying a full bottle of wine in a restaurant these days. I just don’t understand why restaurants don’t make them more affordable. I think they would see more sales if prices were lowered.”

Chonka, 62 (“although I don’t feel like it!”), who has lived in Germantown since 1985, has taught classes in wine appreciation (with tastings) for Mt. Airy Learning Tree since 2009 and French language classes as well. He has had up to 16 local residents in a MALT wine class, and his next ones are May 28 and June 11, 7 to 9 p.m., at Mt. Airy Nexus, 520 Carpenter Ln. Unlike the actual wines, his classes are anything but dry.

Chonka earned an M.A. in French literature from the University of California-Santa Barbara, but when it comes to wine, you might say he is self-taught. He spent a year in the early 1980s teaching English at the University of Bordeaux in France, which he calls “the mother lode of wine culture. It is the pre-eminent wine region. It touts the most expensive, most recognized wines in the world.”

It produced the “most prestigious wine” Chonka has ever had the good fortune to taste, he told us in a previous interview. It was a 1973 Château Latour, purchased during his year-long stay in France. 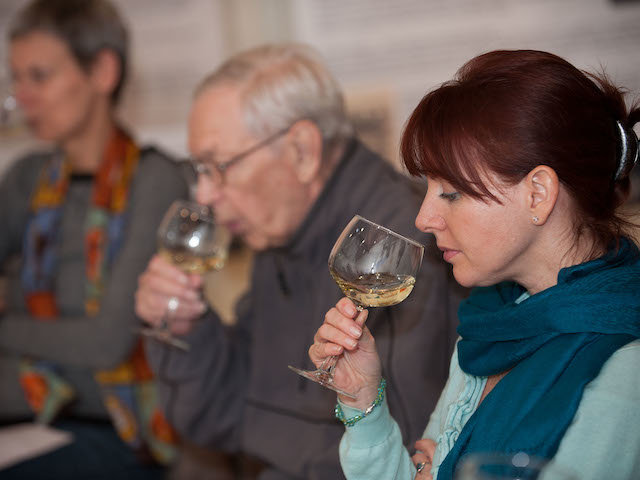 Chonka’s next MALT classes are on “Wine Tasting: Finger Lakes” on May 28 and June 11 at Mt. Airy Nexus, 520 Carpenter Ln. Seen here is a participant in one of his earlier classes.[/caption]

Chonka has studied wines from around the world, and his MALT classes have included bottles from Spain, Portugal, Australia and New Zealand. Since mid-2013 he himself has gone on “at least a dozen, and probably more” wine drinking tours of France, California, New York and Pennsylvania.

When it comes to the best wine bargains, Chonka says it is not even a close call.

“I keep coming back to Portuguese wines,” he said. “They are of such good quality, and you just can't beat the prices for both reds and whites, which are typically blends of native Portuguese varietals. Quinta do Vale Meao ‘Meandro,’ Vinha do Monte and Esporao are three particular labels to look for.”

“I visited the region last summer, and I was curious to explore many wineries there whose reputation among wine connoisseurs has been improving greatly in recent years. The Finger Lakes have been profiled at least a few times in the Wine Spectator.”

But how would local wine buffs (oeneophiles) obtain these wines since few if any are in local state stores?

“It’s just a four-hour drive to the north from Philadelphia, and it's a lovely destination for either a weekend getaway or more extended vacation. Plus, there are now over 200 wineries throughout the Finger Lakes.”

When not drinking wine, Chonka has a day job involving data bases produced by a stand-alone company called Clarivate Analytics, “but I hope to devote more time to wine education and tasting when I leave the scientific information business in the not-too-distant future.”

In addition to sampling lots of commercial wines, Chonka sometimes makes his own wine with the help of friends and a professional wine-maker at the Cherry Hill Wine Room in New Jersey.

“They source grapes from California and Argentina and do all the crushing and vinification on site at their facilities. You can make all kinds of types, and they're pretty decent. My friends all enjoy pitching in the process as well as drinking the fruits of our labor!”

Chonka also has a wine blog that has included over 70 posts.

What is the hardest thing Chonka has ever done?

“Cranking out dinners as a restaurant chef at peak evening hours with no assistant chef.”

If Chonka could meet and spend time with anyone on earth, living or dead, who would it be?

“Thomas Jefferson, who was a wine connoisseur, or Frederick Douglass.”