The great American novelist Toni Morrison died on Aug. 5, 2019. by John Colgan-Davis "Because each had discovered years before that they were neither white nor male and that all freedom and triumph … 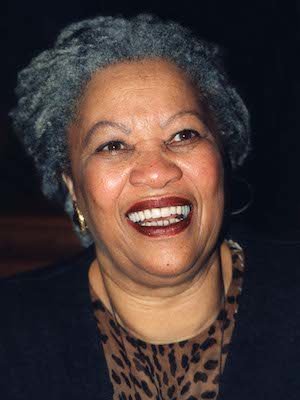 "Because each had discovered years before that they were neither white nor male and that all freedom and triumph was forbidden to them, they had set about creating something else to be.” – "Sula" by Toni Morrison

I have always been a reader. I don’t know exactly when I learned to read, but I cannot remember a time when I did not read. Comic books, newspaper comics, magazines, books, poems, cereal boxes, street signs, historical markers, advertisements: if it had words in English and was in my sight, I probably read it. It is and has been one of the most joyous and important parts of my life.

Of course, I love libraries and bookstores: those two institutions have helped me read a great many books in my lifetime.

Dramas, history books, brochures, mysteries, fantasy, pamphlets, biographies and autobiographies, comedies and fiction from any and all genres. And I collect quotes from movies, friends, historical figures, historical sayings, plays and especially from books.

I find that authors, especially novelists, often have ways of saying and expressing things that touch me deeply and lead me to new realizations.

I have been an admirer of Toni Morrison for over 45 years. She has been and is a voice that causes me to pause, look at something differently or more deeply and to become more aware of my own expectations, biases and assumptions.

“Sula,” set mostly in a small Ohio town, was the first of her novels that I read, and the way her narration mixed poetic language, imagination, keen imagery and observation had me stop on page after page to re-read a particular passage again out loud – to hear it and taste it and feel it.

And the ways we are shown how loneliness, anger and self-doubt, as well as determination, can sometimes be “dangerous” ring true throughout the novel. “Sula” is a relatively short book, 194 pages, but it is truly a “weighty” book. It was also one of the first novels that had me seriously and deeply connect with female characters, which opened up a whole new literary world for me.

“Song of Solomon,” with its rich and multi-layered, symbolic language and mix of folklore, Biblical references, mysticism and harsh reality is probably my favorite of all her books. It is one book I truly regret never having had an opportunity to teach.

But the book which first exposed me to Toni Morrison and deepened my own searches for identities wasn’t one she wrote. It was “The Black Book,” which she helped edit and publish in 1974 while she was an editor at Random House. I encountered it at the old Robins Bookstore on 13th Street, and I had never seen anything like it.

It was a trade paperback with a cover that was a collage with pictures of Bessie Smith, Duke Ellington and Satchel Paige, racist stereotyped advertising labels for products, a Black cowboy with a rifle and saddle, an African bronze sculpture and the words, “The Black Book” proudly front and center. It also included descriptions of slave whippings, escapes, stories about Black soldiers, pioneer farmers, seamen, athletes, inventors and scientists, etc.

In 1974, that book sent my ADD and curious mind in a thousand different directions at once, searching and looking at things, reading, researching and listening to hundreds of new things and increasing my own understanding of African-American cultures and experiences.

I wore the pages out of two editions of that book, but hearing of Toni Morrison’s death on Aug. 5 took me to the library to take out a copy. And once again it did its magic, reminding of so much about heritage, triumph, struggle and the incredible, simple resiliency of African-Americans and, indeed, all human cultures need to have in order to survive in this world. I am joyously working my way through “The Black Book” again. It never gets old.

There is so much more I could say about Toni Morrison and her importance to U.S. literature, cultural studies and intellectual development. She wrote 11 novels, wrote and/or edited several books of literary criticism and analysis, co-wrote 5 children’s books and penned numerous articles.

She also taught at several colleges and universities including Princeton, Rutgers, Cornell and the State University of New York. Her output lasted from the 1970s until now, and several generations of readers, thinkers, writers and fans got to meet and encounter her ideas.

I cannot begin to catalog the ways in which she has influenced me; she is one of my many inspirations. So many of her quotes and ideas have become a part of me and how I look at the world. Rest in Peace, Ms. Morrison. Rest in peace. And thank you so much.

John Colgan-Davis is a longtime Mt. Airy resident, retired public school teacher and harmonica player with The Dukes of Destiny.